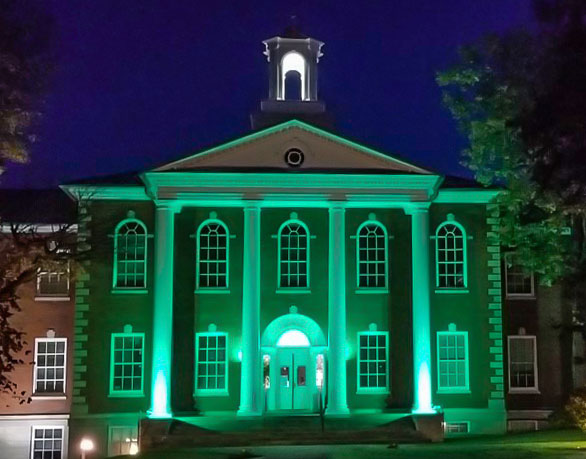 The Livingstone County, N.Y. Courthouse, lit up in green for Operation Green Light.

Waiting to jump out of a military aircraft, a servicemember waits for a red light to turn green, signaling that it’s time to go.

His or her training made that process automatic. Being back on the ground at the end of a military career, anticipating a transition to civilian life might create more anxiety.

“The military trains people very well, and the training helps you trust in your equipment and your leadership,” said Jason Skinner, president of the New York State County Veteran Service Officers’ Association. “What the military doesn’t do is train you for the transition.”

Skinner and various organizations in New York are working to make those transitions easier for both service members and their families. He is pushing to end residency requirements to take civil service exams in a county where a veteran plans to move as a civilian and create a pilot program with the federal government to create mentorships in counties.

“Counties, and first responder agencies specifically, are the employers of so many veterans,” he said. “We want to make sure there’s no gap in their ability to provide for their families. When you leave the military, you’re losing your job essentially.”

Skinner, who is the county veterans service officer for Livingston County, said allowing service members to take their exams in advance of their discharge would streamline the employment process, helping both applicants and counties.

Operation Green Light, a collaboration among Skinner’s organization, the New York State Association of Counties and the New York State County Executives’ Association, worked to illuminate as many public buildings as possible during the week of Nov. 7, which included Veterans Day. That has included participation from New York City Mayor Bill de Blasio and Gov. Kathy Hochul (D), who had Niagara Falls illuminated in green.

“We wanted to do something special this year to honor the service and immense sacrifice of all our veterans, especially those who served over the last two decades in our nation’s fight against terrorism,” said NYSAC Executive Director Steve Acquario.

“Operation Green Light gives individuals, businesses and government leaders a way to reach out and let members of the veteran community know that we’re with them and that we appreciate all that they have done to protect our country and our way of life,” he said.

In addition, the ETS Sponsorship Program, a partnership with the Department of Veterans Affairs (VA) and the Department of Defense (DoD), will serve as a pilot program sponsoring service members through the transition process from military to civilian life, serving as a point of contact and introduction to the federal veteran bureaucracy.

“I know a friend who had 27 postings in 30 years of his military career,” Skinner said. “Whenever he was transferred, if he needed to know what was available for his wife to ease her transition or to help find soccer teams for their kids, they got an answer. He didn’t have that when he left the service. There was nobody to answer their questions.”

The ETS program will begin contact with a discharging veteran starting as early as a year out from the end of service to help make a smooth transition. The sponsors will receive training to help them work with servicemembers and navigate the Veteran Sponsor Partnership Network. Sponsors will flesh out a profile about the servicemember’s family, help them settled in to their new home and help them receive VA benefits.

Skinner sees this as a timely innovation, given the impending influx of veterans with ties to New York following the escalation of operations in Iraq and Afghanistan in recent years.

“Veterans make excellent community members, employees and volunteers,” Skinner said. “Whatever we can do to make it easier to join our communities will be good for everyone.”