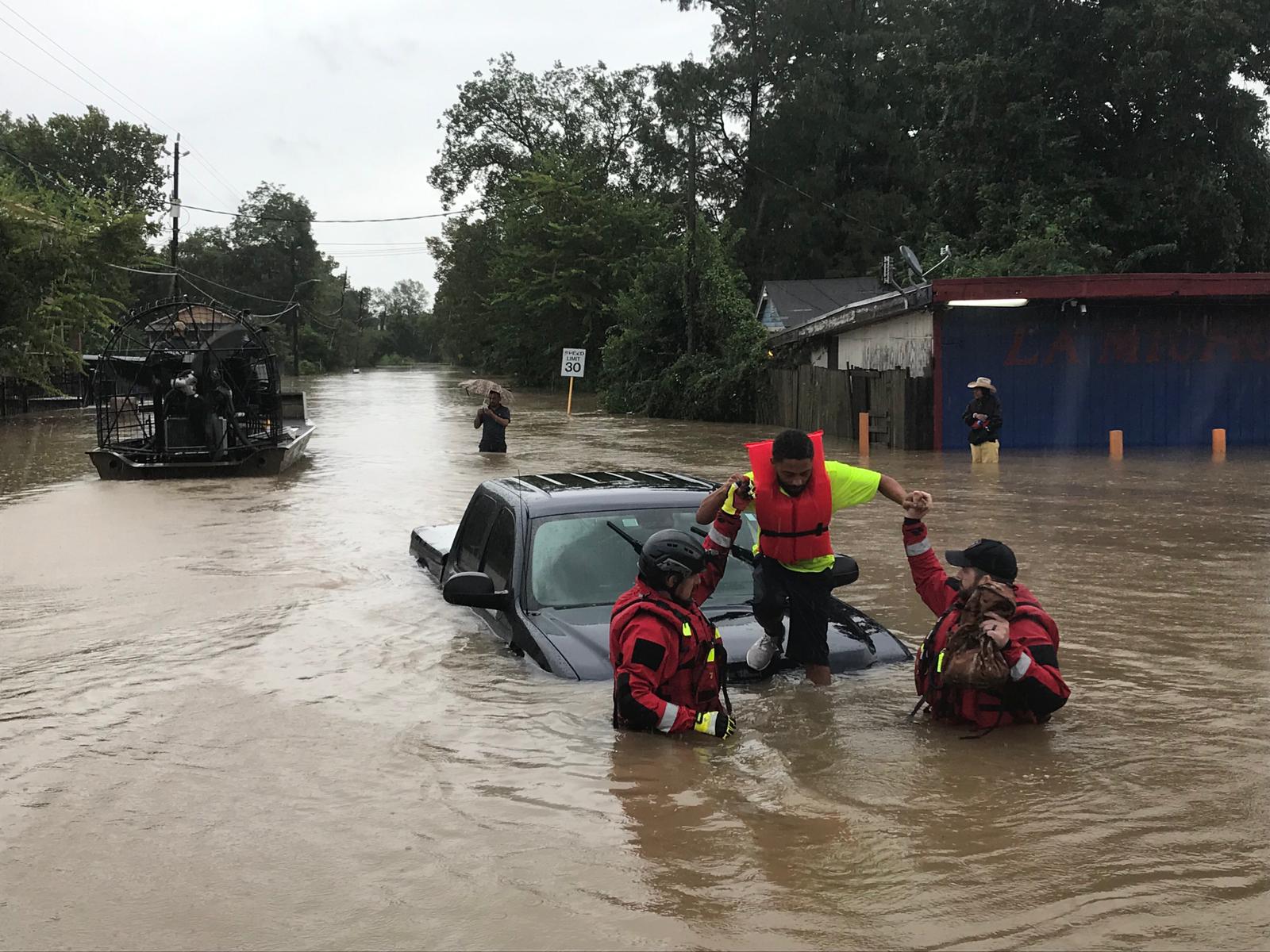 TEXAS
The HARRIS COUNTY Commissioner’s Court allocated $5 million to help mitigate flooding damage caused by Hurricane Imelda’s landfall. County Mayor Lina Hidalgo and Houston Mayor Sylvester Turner have launched an assistance fund that she said will be overseen by a non-profit, similar to what was created in the wake of Harvey, the Houston Chronicle reported. More than 130 homes and businesses were flooded.

News From Across the Nation is compiled by Charlie Ban and Rachel Looker. Do you have an item for us to consider? Contact cban@naco.org or rlooker@naco.org.

The LOS ANGELES COUNTY coroner will now collect data on sexual orientation and gender identity to track suicide rates and hate crimes against LGBTQ individuals. The Board of Supervisors approved a motion to have the county coroner collect the data which can be used to create policies that protect communities at risk, according to the Los Angeles Times.

The Board of Supervisors in SAN DIEGO COUNTY backed a proposal that provides confidential mental health services to first responders, including responders who have retired. The behavioral health program is funded through a realignment of Health and Human Services funding and will cost $450,000 in this fiscal year’s budget, The San Diego Union-Tribune reported. The goal of the proposal is to reduce suicide rates among first responders.

A new program in SANTA BARBARA COUNTY is encouraging county employees to commute to their jobs using mass transit. The Clean Commute Program provides incentives for employees to use other forms of transportation, telework or have alternative schedules, Santa Ynez Valley News reported. The goal of the program is to reduce traffic congestion, demands for parking spaces and greenhouse gas emissions.

A website is telling the story of the opioid epidemic in COOK COUNTY through maps, statistics and narratives that draw attention to the opioid crisis. The website focuses on information about the rise of fentanyl use, prescription disposal locations, treatment centers and naloxone, WTTW reported. Through these resources, the county’s Department of Public Health sees the website as a resource for county residents to access help. The county saw nearly 400 opioid-related deaths in 2017.

VIGO COUNTY school officials introduced a new program to combat vaping and e-cigarette use for high school and middle school students. The “Catch My Breath” program educates students who are caught vaping instead of disciplining them, WTHI-TV reported. Vaping numbers are higher districtwide compared to last year for Vigo County School Corporation. Thirty students have completed or are currently enrolled in the program.

Kentucky is changing its plan to allow state residents to obtain Real ID licenses from local circuit court clerk’s offices, WDRB reported. After Oct. 1, 2020, without a Real ID license, Kentucky residents will need a passport or other valid ID to board domestic flights or enter federal facilities. The Kentucky Transportation Cabinet wants to use regional locations across the state for residents to apply for Real IDs instead of county offices. This change comes after local circuit court clerks and lawmakers commented on the additional workload on offices that manage county courts.

There’s a new buzz in HOWARD COUNTY after officially being declared a bee sanctuary county. The county joined the Bee City USA Coalition and is committed to reducing pesticide use as well as creating sustainable habitats for bees, according to WBAL-TV 11. To help protect bees, the county created a pollinator-friendly meadow habitat on county parkland that encompasses 55 acres. In addition to reducing the use of harmful chemicals such as neonicotinoids, the county will also hold educational events and expand habitats.

A new bill has been introduced in MONTGOMERY COUNTY that requires elected officials to implement a racial equity plan for county government. The Racial Equity and Social Justice Act defines racial equity as “changes in the policy, practice and allocation of county resources so that race does not predict success and opportunities can be improved for all people,” Bethesda Magazine reported. The bill also requires legislative and budget requests to include a racial equity and social justice impact statement.

Commissioners in GRAND TRAVERSE COUNTY launched a program that will hire five part-time court bailiffs to increase jail staffing, reduce overtime costs and provide more security, the Ticker reported. Currently, the Grand Traverse Sheriff’s Office uses corrections officers to serve as bailiffs, leading to staffing shortages at the county jail. A shortage of corrections officers required the county to use neighboring county jails, resulting in boarding fees. The part-time bailiffs will be hired using available funds in the Sheriff’s Office budget with a combination of approved grant funding and Probate, Family and District Court budgets.

The CALLAWAY COUNTY Commission appointed new members to an anti-domestic violence board that has not had new appointees since the 1980s, Fulton Sun reported. The members on the five-person board aim to identify and support unmet needs of domestic violence programs and services in the county. The board allocates $10,000 annually and will meet twice per year.

After all of the uncertainty of who would show up and what they would do when prompted to “Storm Area 51,” the eventual assembly in LINCOLN COUNTY was manageable and peaceful. Though projections indicated upwards of 30,000 people were planning to descend on a few sparsely-supplied rural towns, roughly 5,000 people attended a camping and music festival designed to keep the revelers from trouble. Only two people were cited by the sheriff’s office for trespassing near the boundaries of the large U.S. Air Force facility within the Nevada Test and Training Range, the Los Angeles Times reported.

In hopes of cutting down plastic waste, ALBANY COUNTY Executive Dan McCoy has banned the distribution of plastic straws and stir sticks in county-owned facilities. NEWS10 reported that people with disabilities requiring the use of plastic straws would not be affected, nor would it affect items with plastic straws already attached.

Albany County can use compostable, recyclable or reusable items and vendors who sell products to the county will have to make the switch. McCoy has also submitted legislation requiring all private businesses that sell beverages like coffee and soft drinks to get rid of their plastic straws and stir sticks, too. Medical and dental organizations would be exempt from the legislation.

The DUTCHESS COUNTY Department of Emergency Response is partnering with a local amateur radio club to hold a technician-level amateur-level radio licensing class for HAM radio operators. The class will include FCC license exams.

Pending signature by the county executive, ULSTER COUNTY will soon have a Department of Economic Development, following approval by the County Legislature. The executive will appoint the department’s director, who will be subject to approval by the Legislature. The county already has an Office of Economic Development within the Planning Department, The Daily Freeman reported.

Following an agreement between the ORANGE COUNTY Sheriff’s Office and its commissary contractor, the automated teller machine in the county’s detention center lobby will no longer impose a $3 direct fee on those making cash deposits on behalf of incarcerated individuals.

“It’s really important for families that do have the money to put in there that they are able to do that and not get assessed an excessive fee,” Caitlin Fenhagen, Orange County criminal justice resource director, told the Daily Tar Heel. “We’re really happy that that can happen, and I hope that it will ease the burden for some of the families and loved ones.”

The DICKSON COUNTY Commission approved a contract for an outside business to provide 24-hour medical care to inmates. That change will also include mental health care services, which Sheriff Jeff Bledsoe told The Tennessean would reduce the county’s liability. The new services would also relieve the burden on jail officers who had to do healthcare administrative work.

CLARK COUNTY is narrowing in on a policy for handling homeless encampments on county property, according to The Columbian. The County Council directed staff to move forward with a policy that would ban daytime camping and prevent business entrances from being blocked by tents and people sleeping. The policy would expand the public rights of way where camping would be prohibited.

It would also prescribe how crews should handle personal property and hazardous materials. In 2016, a federal judge found the county violated the constitutional rights of homeless individuals after work crews seized and threw out their property during an encampment sweep.

KING COUNTY Executive Dow Constantine’s budget proposal includes a $300,000 request for measures designed to attract more filmmaking to the county. Of that, $100,000 would go toward grants for film producers who work with traditionally disadvantaged populations and the rest would pay for an industry consultant to coordinate film-friendly policies.

He also requested a $25 fee for filming on county property, reduced from $500, and KUOW reports he has signed an executive order directing the county to focus on short-term real estate deals to support film production.

PARK COUNTY is considering regulations on short-term rental properties in rural parts of the county. Those talks, however, are less driven by concerns over competition with hotels and more so because of nuisance issues. The Powell Tribune reported that complaints about trespassing, parking problems and residences advertised as being able to house more guests than septic systems might be able to handle spurred commissioners to address the issue.