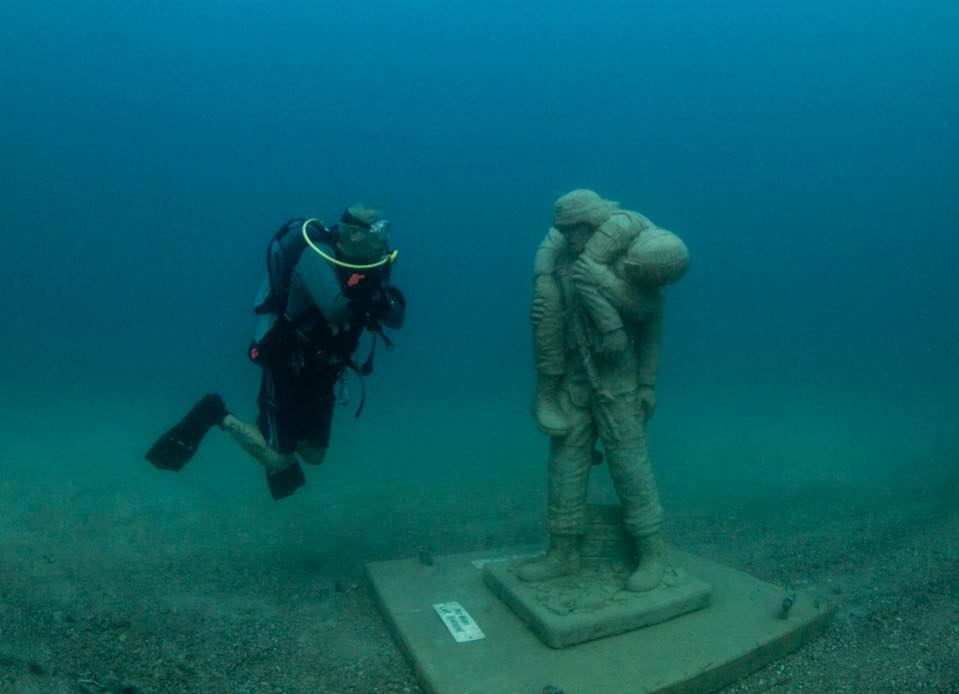 FLORIDA
A new memorial to honor veterans has been placed in an unusual spot in PINELLAS COUNTY. The nation’s first underwater veteran memorial opened off the county’s coast. The Circle of Heroes underwater memorial features a dozen six-foot statues of service members standing in a circle formation, Tampa Bay Times reported. In the center of the circle, a monument includes the bronze emblems of the five military branches. The statues provide unique diving opportunities for visitors.

The WALKER COUNTY Sheriff’s Office has launched an education program for inmates to obtain their high school diplomas. Through a partnership with Bevill State Community College, inmates can obtain their GED diplomas after completing the program, CBS 42 reported. Upon completion, inmates are eligible for a free college course at any Alabama community college.

News From Across the Nation is compiled by Charlie Ban and Rachel Looker. Do you have an item for us to include? Contact us at cban@naco.org and rlooker@naco.org.

Walmart lost an appeal on reducing PULASKI COUNTY tax assessments after a county judge ruled the company’s reports were flawed in what tax accessors view as the first test of the dark-store theory in the state, the Arkansas Democrat Gazette reported. The dark-store theory says that big-box retail stores should be valued for tax purposes as if they are closed and vacant. The county’s 2017 valuation of eight Walmart Supercenters and two Sam’s Club stores was $145 million. Walmart wanted to reduce the value to $74.3 million. Attorneys for Walmart and Pulaski County are preparing for the case to move to the state Supreme Court.

The Board of Supervisors in LOS ANGELES COUNTY voted to cancel a contract for a downtown mental health treatment center to replace the Men’s Central Jail. The contract for the nearly $2 billion project was voted down four to one, the Los Angeles Daily News reported. Four supervisors supported a motion asking for a task force to report on jail reform and replacement of the Men’s Central Jail.

Supervisors in SAN DIEGO COUNTY have launched the County Air Pollution Control District’s “Clean Air for All” campaign to minimize the use of high-polluting vehicles. The program allows businesses, nonprofits and government organizations to replace vehicles that have high emissions with more environmentally friendly options, according to KUSI. The California Air Resources Board will present the county with $28.5 million in state grants for the program.

A universal playground is under construction in PASCO COUNTY, Spectrum Bay News 9 reported. The park provides adaptive equipment for children with special needs. Donations for the universal playground, which will be the first in the county, totaled $125,000. The playground will be built next to an existing playground.

DEKALB COUNTY is launching a new tutoring program to improve children’s literacy skills. The goal of the program, called the AARP Experience Corps, is to enhance the reading skills of children in kindergarten through third grade who are behind in reading by two grade levels. In the county, data shows 74 percent of students are reading below their grade level. Volunteers must be at least 50 years old and have a high school diploma or GED to participate.

The Department of Public Health in LINN COUNTY is working to improve air quality by paying residents to buy new furnaces. County residents who are Alliant Energy customers can receive vouchers to replace wood-burning appliances with EPA-certified appliances, KCRG-TV9 reported. Incentives range from $1,000 to $8,000.

CHARLES COUNTY residents can help deputies solve crimes through the Virtual Crime Watch program. Residents and business owners are encouraged to register their security cameras with the Sheriff’s Office, which adds their name to a private database of those in the county who own buildings with cameras, WTOP reported. Investigators can then reach out to registered individuals if a crime happens in the area to see if it was caught on camera.

An ordinance passed by the ST. LOUIS COUNTY Council will prevent elected officials from receiving county pensions if they are convicted of a felony during their time serving in an official role. The council unanimously voted in favor of the ordinance.

The prospect of a massive gathering around the Air Force base housing Area 51 (examined in the Aug. 19 County News) has prompted two county Boards to pass preemptive emergency declarations. NYE and LINCOLN counties have both “pre-signed” declarations, which will allow for smoother assistance from the state if the need arises. Lincoln County approved events associated with “Alienstock” in two towns in hopes of keeping visitors occupied there and not trying to “storm the gates,” but Nye County denied a permit to organizers of “Peacestock 51.”

Emergency dispatchers in MONMOUTH COUNTY can now pinpoint the location of cell phone callers, thanks to new software that extracts GPS data from calls. Nearly 80 percent of the 911 calls in the county came from cell phones, The Two River Times reported.

Three counties in New Jersey and one in New York have received more than $35 million to house immigration detainees at their jails in 2019. U.S. Immigration and Customs Enforcement has paid BERGEN, ESSEX and HUDSON counties, along with ORANGE COUNTY, N.Y., more than $35 million through eight months so far this year, lohud.com reported. The total in 2018 was more than $87 million. More than 55,000 individuals were held in August in county jails and private detention facilities across the United States.

Considering a drop in fatal crashes and crashes with injuries versus an increase in low-level crashes, the SUFFOLK COUNTY Legislature voted to extend its red-light camera program. The county hired an independent company to assess the effectiveness of the cameras. Because studies found that fatalities and injuries in crashes are down — despite the increase in overall crashes — the company recommended keeping the cameras, News 12 reported.

Roughly 700 Cleveland residents in one of the city’s least-connected neighborhoods will have access to low-cost internet thanks to a newly mounted antenna on the CUYAHOGA COUNTY Juvenile Justice Center. The county’s Board of Control approved a 10-year, $10-per-year license agreement that will allow a private service provider to place the antenna on the building, The Plain Dealer reported. The project is part of a four-neighborhood pilot program, called empowerCLE+, which is aimed at closing the digital divide in some of Cleveland’s low-income areas.

Proposed legislation would allow Attorney General Dave Yost to take over nearly 1,000 lawsuits by Ohio counties and cities that are pending against opioid manufacturers and distributors. The proposed “Consolidate Litigation Act” would give the Ohio attorney general’s office “the sole and exclusive authority” to file certain civil lawsuits. SUMMIT COUNTY Executive Ilene Shapiro told The Plain Dealer that the county’s standing to bring legal action was well-established.

The Summit County Council allowed its attorneys to settle lawsuits with any drug companies with less than 10 percent of the opioid market in the county, which it, along with Cuyahoga County, did with an Irish drugmaker, for a combined $15 million.

GRANT COUNTY recieved a $3.4 million grant from the U.S. Department of Transportation in partnership with the state under the Competitive Highway Bridge Program. The grant will help the county fix and replace 34 bridges. Several other counties across the country also secured funding, which totaled $225 million.

The SHELBY COUNTY Commission has established a $15 minimum wage for county employees, the Daily Memphian reported. The state has no minimum wage and follows the federal guidelines for $7.25 an hour.

ARLINGTON COUNTY thinks the best things in life are free trees. And the county’s Department of Parks and Recreation is giving away 400 native trees, in what has become a twice-annual tradition.

The trees, ranging from 2-4 feet in height, come in two-gallon containers and recipients get counsel from county landscaping staff and a nonprofit, ArlNow reported.

The KING COUNTY Council and Seattle City Council are considering legislation to establish the King County Regional Homelessness Authority. The body would oversee policy, funding, and services for people experiencing homelessness countywide. The legislation includes a proposed interlocal agreement and a charter that authorizes the creation of the new public development authority to administer and oversee regional homelessness efforts.

The authority would focus on unifying and coordinating the homeless response system in the county and city.

WINNEBAGO COUNTY is considering switching to an appointed medical examiner, rather than an elected county coroner. The Post Crescent reported that the change would allow the county more leeway in considering nominations for the position, which is currently appointed by the governor.