News from Across the Nation - Aug. 19 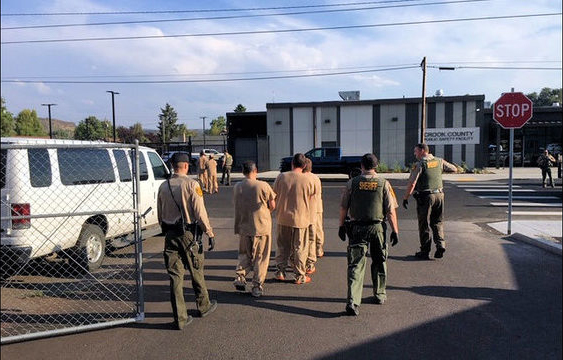 OREGON
Why did the CROOK COUNTY jail inmate cross the road? Because the county finished work on a new jail, a stone’s throw from the old one. Nineteen inmates walked across the street to their new, larger accommodations, accompanied by sheriff’s deputies. The new jail sports 85 beds, much larger than the 16 beds and overflow holding cells of the old facility, KTVZ News reported. In a few weeks, the 26 inmates housed in JEFFERSON COUNTY’s jail will join them, though not likely on foot. Crook County jail deputies accompanied inmates in a walk across the street from the old jail to the new county jail on a recent Monday evening. Photo courtesy of Crook County Sheriff's Office

The Board of Supervisors in ALAMEDA COUNTY agreed to lease a former jail to be used as a homeless shelter to the city of Oakland, according to the San Francisco Chronicle. The county will lease the jail to Oakland for $1 per year to convert the facility into housing for the homeless population. In the last two years, Alameda County’s homeless population has increased by 43 percent. The first jail facility that would be converted into a homeless shelter has plumbing, toilets and facilities to accommodate more than 800 people.

An initiative by health leaders in DOUGHERTY COUNTY is expanding a gardening program to promote healthy eating. The “Pick it! Try it! Like it!” program involves four gardens throughout the county, WALB reported. This year, two additional gardens have been added with one located at the county’s health department. Through the initiative, county residents can harvest their own produce and learn how to prepare foods in healthy ways from an instructor.

MAUI COUNTY has established a program to assist first-time homebuyers, The Maui News reported. The First-Time Home Buyers Down Payment Assistance Program will select applicants through a lottery drawing process. Applicants must submit a credit pre-approval letter from a mortgage lender with their application. The program assistance will be made available in the form of a grant for eligible properties in the county.

Records at the JOHNSON COUNTY recorder’s office are being digitized and archived to make it easier for residents to complete online searches. According to the Daily Journal, more than 400,000 records have not been indexed in the county since its incorporation in 1823. Records include real estate documents, leases and military discharge information. The county has entered an agreement with CrowdForce to index the records.

MARSHALL COUNTY launched a text-to-911 service where 911 dispatchers can send and receive text messages through a program called Texty, WPSD Local 6 reported. The service is helpful in situations where there is no cellular reception to make a phone call, but texts can be sent. The program allows individuals in certain situations to discreetly contact 911 services without making an audible call.

The MONTGOMERY COUNTY Council voted to remove barriers for homeowners to build Accessory Dwelling Units (ADUs). The Zoning Text Amendment makes it easier for homeowners to build ADUs, which are defined as second, separate living units on a lot zoned for single unit development. The amendment allows for the conversion of existing, legally built structures into ADUs and removes the prohibition of ADUs in new construction.

The state's attorney in PRINCE GEORGE’S COUNTY is establishing a juvenile justice reform plan that focuses on sending youth to diversion programs instead of jail for less violent crimes, NBC4 Washington reported. The diversion program involves partnerships with police departments, nonprofits and school systems to decrease arrests within schools.

The clerk’s office in ALLEGAN COUNTY has launched an online document retrieval system to reduce wait times for residents who want to print official records, the Holland Sentinel reported. The program allows residents to search for birth certificates, land deeds and other official documents from their home and is beneficial for residents who live far away from the county clerk’s office.

DAKOTA COUNTY is partnering with Lyft to provide transportation to certain residents on Medicaid waivers, TwinCities Pioneer Press reported. The pilot project focuses on helping those with disabilities find work in areas where public transportation is scarce. Residents who receive home and community-based services are eligible for the free program.

A new program in CHICKASAW COUNTY will provide inmates with iPads at the county’s regional correctional facility. Inmates will be able to rent the iPads for a full month using their “canteen funds,” WCBI reported. The iPads will help inmates stay connected to family members, take college courses, watch movies and video chat. The goal of the program is to provide inmates with tools to help them find jobs when they are released from prison.

The DOUGLAS COUNTY Community Relations and Public Information Department got some star power recently when Miss Nevada 2016 joined the staff, according to The Record-Courier. Bailey Gumm’s talent during the pageant was tap dancing, but the multitasking abilities required to respond to different public requests while rolling out county initiatives uses a lot of the same skills.

ELKO COUNTY is the fourth largest in the contiguous United States, so mobility is a big part of county operations. The county will soon take the keys to a mobile command vehicle from the Department of Emergency Management, which will serve as a satellite communications center, crucial in parts of the vast county that don’t have adequate connectivity. The Nevada Division of Investigation acquired the 2004 Freightliner Major Incident Response Vehicle through a Homeland Security grant, but it was not used much — only about 380 hours, according to the Elko Daily Free Press. “We can provide a unified command center out there instead of just being out in the dirt or out by a sand pile. We could coordinate everything, and we’ll have satellite phone connections,” Emergency Manager Annette Kerr told the paper.

Voters will decide in June 2020 whether WARD COUNTY should continue its weather modification program. The county’s contract with the North Dakota Atmospheric Resource Board for services doesn’t expire until March, and if voters approve continuing those services, funding would be necessary for the rest of the year, according to the Minot Daily News. Most of North Dakota above the Highway 2 corridor, which includes part of Ward County, is suffering from a moderate drought and could benefit from continued cloud seeding.

Overpopulated county jails must alleviate overcrowding by sending inmates to other jails at their own expense, according to a legal opinion issued by Attorney General Dave Yost.

GUERNSEY COUNTY, which was housing more than 120 inmates in its 78-inmate-capacity jail, asked for the opinion. Yost’s opinion also says that inmates must be sent to other counties if that jail doesn’t have “a sufficient jail or staff,” The Plain Dealer reported.

LINCOLN COUNTY’s Public Health Department is teaming up with the Partnership Against Alcohol and Drug Abuse to complete a community assessment about problem gambling.

In a stunning upset, they’re tearing up a parking lot to plant paradise. The PRINCE WILLIAM COUNTY Board of Supervisors voted to abandon an unused 2.5-acre commuter parking lot and replace it with a new park. The county’s parks, recreation and tourism department will build the new park, with a focus on wellness, with amenities for children and adults, Inside NoVa reported.

The venerated, 62-year-old BROWN COUNTY Veterans Memorial Arena has been demolished to make way for a new $93 million expo center featuring about 120,000 square feet of event space, which is expected to open in January 2021. The demolition took place over a long stretch, which gave onlookers a view of the process.

A bankruptcy judge ruled that CAMPBELL and CONVERSE counties do not have first priority when it comes to collecting the unpaid mineral production taxes owed by Cloud Peak Energy. The judge said that debtor-in-possession financing creditors will be first in line to collect what they are owed, the Powell Tribune reported. That might total $30 million for Campbell County for the second half of 2017 and all of 2018 and 2019.  Wyoming law doesn’t allow for counties to attach a priority lien claim on unpaid taxes.

The TETON COUNTY Library Board has passed a video surveillance policy that states why the library has cameras trained on its exterior grounds — to discourage illegal behavior and policy violations, to enhance the opportunity to apprehend offenders and to provide recorded data relevant to the control of Library security and operations — and establishes that the library director and facilities maintenance coordinator will be the only staffers to view the footage, the Jackson Hole News and Guide reported. The video data can be shared with law enforcement if the director approves.

News from Across the Nation is compiled by Charlie Ban and Rachel Looker. Send your news tips to cban@naco.org or rlooker@naco.org.