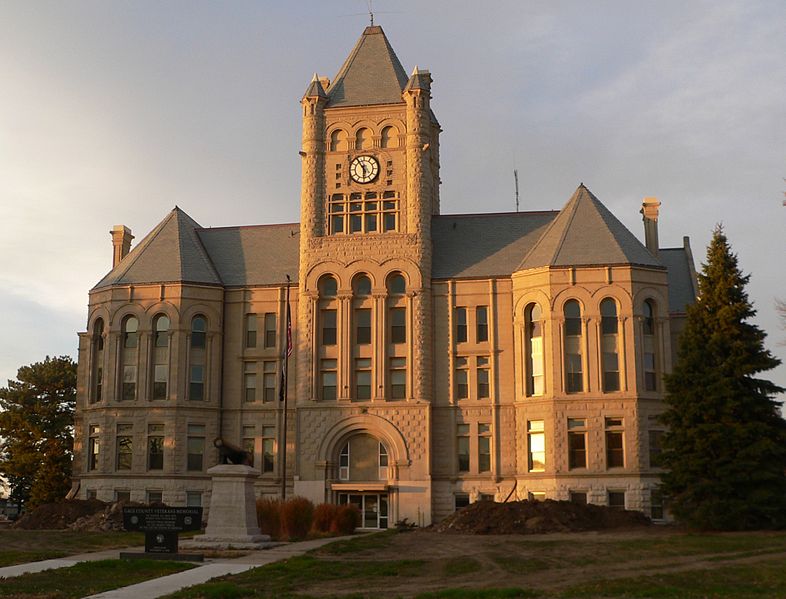 A small rural county in Nebraska, Gage County, is facing bankruptcy after a jury awarded $28.1 million to six people who sued the county. They were exonerated by DNA evidence after being wrongly imprisoned for a crime that took place there in 1985. Collectively, they spent 75 years in prison.

While Gage County waits to see if the verdict gets tossed out on appeal, county supervisors are weighing their options. Two bankruptcy attorneys hired by the county “are working on giving us information on how that [bankruptcy] would proceed and how that would affect the county,” Gage County Board Chair Myron Dorn said.

With a population of a little more than 20,000, the county has an annual budget of $27 million and collects about $8 million in taxes per year. Legal fees totaling more than $3 million have already sucked funds from the county’s operational budget over the past seven years.

Nebraska limits the amount counties can collect from property taxes; the county could increase their property taxes to raise another $4 million annually, before it hit that ceiling, Dorn said. County residents could also vote to raise their own taxes even more, but “we’ve had that discussion,” he said “and our Board agrees that that wouldn’t pass.”

The county could also look to the state legislature to pass a generic bill at a future session that would provide funding for the county, he said.

The specter of bankruptcy is the result of the decades-old crime case that dates to Feb. 6, 1985, when a 68-year-old grandmother was found raped and murdered in her home in Beatrice, the county seat.

The people who served time for the crime, three men and three women, became known as the “Beatrice Six.” They were exonerated by DNA evidence in 2008. By then, they had collectively served 75 years in prison.

The Beatrice Six filed a federal lawsuit against Gage County, as well as a former sheriff’s deputy and reserve deputy, claiming that investigators worked to close the case despite contradictory evidence. Last summer, a federal jury awarded the Beatrice Six $28.1 million, plus additional money for legal fees.

Unless the verdict is tossed out on appeal, the county will need to pay the $28.1 million plus lawyer fees.

Nebraska Intergovernmental Risk Management Association (NIRMA), Nebraska Association of County Officials and the Nebraska Sheriffs’ Association filed friend of the court briefs. The groups did not side with either Gage County or the Beatrice Six, but wanted to weigh in because the outcome could have significant effects upon the state’s counties, law enforcement and all Nebraska residents, Dorn noted.

In 2009, Gage County filed claims with both the risk-sharing pool and a private insurer, Dorn said. The county used the private insurer when the Beatrice Six were arrested and convicted. Both insurers denied the county’s claims.

The county hired two lawyers to dig into the county’s insurance history to leave no stone unturned in hopes of finding something that would help the county pay the judgement, Dorn said.

“They have filed in court on behalf of the county,” Dorn said.  “One suit was filed against our current insurance company since about 1997. The other was against the insurance company the county had before 1997. Both lawsuits are challenging the companies’ claims  of ‘no’ liability or insurance coverage. “If we don’t pursue it, we won’t know if we will get anything [from them],” Dorn said.

“We [the Gage County Board of Supervisors] meet every two weeks and we have closed sessions just about every meeting about this,” he said.

“It has taken on its own personality; it has a life of its own. Whatever the verdict, it will have a profound impact on the county.”

One of the kickers to the story: A DNA test in 1989 that could have cleared things up in the cold case was deemed too expensive. Cost? $350, the Associated Press reported.

Of the 349 people exonerated with DNA evidence nationwide, 254 have been awarded compensation though state statutes, civil suits or private bills, according to the Innocence Project. These 254 people have been awarded a total of $657 million.

Some 144 people have been awarded compensation though state statutes, 119 through civil suits and 26 through private bills, the Innocence Project said.

In a somewhat similar case, New York resident Jeffrey Deskovic served nearly 16 years in prison after he was wrongfully convicted in Westchester County, N.Y., but got separate awards from the City of Peekskill, the county of Westchester, the state of New York and the New York State Police.

Lawyers told the newspaper they believed it was the largest jury award in a wrongful conviction case. Putnam County was expected to pay less than the $40 million -- $10 million -- because of a pretrial settlement that limited damages.

Other jurisdictions that have faced bankruptcy include Jefferson County, Ala., as well as several cities. The Alabama county’s debt escalated after bond issuance deals for upgrading the county’s sewer system soured, Reuters reported. The county filed a $4.23 billion bankruptcy in 2011, the largest ever for a jurisdiction until Detroit’s $18 billion case two years later.

The City of Dallas is facing financial hardships due to unfunded public safety pensions for retired police officers and firefighters and back pay liabilities, and is reported to be $5 billion in the red, The New York Times recently reported.

The Times reports that officials are considering raising property taxes, borrowing money for the pension fund, delaying long-awaited public works or even taking back money from retirees.