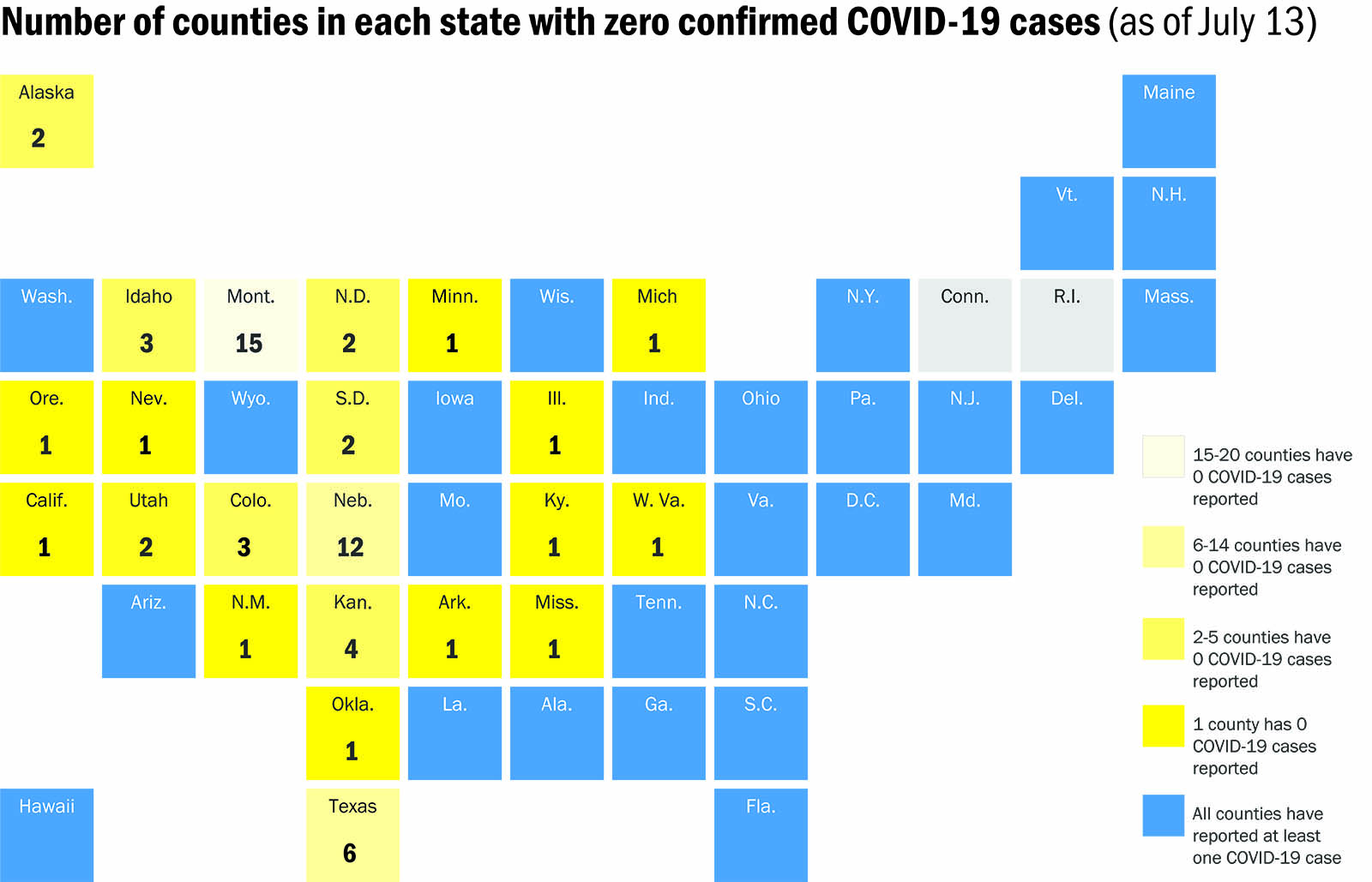 Counties with zero COVID-19 cases are still out there.

The number of counties that have yet to report a case of the coronavirus are declining, yet nearly 60 counties, boroughs and parishes throughout the country have zero confirmed cases of the virus. While untouched by the pandemic, these communities are still feeling the impacts of the public health crisis.

As of July 13, 58 counties reported zero coronavirus cases, according to state departments of public health.

These numbers have significantly trended downward throughout June and July. Over the last month, the number of counties with no COVID-19 cases decreased by nearly 100, from 156 to 58.

Testing is a key component in identifying positive cases and with over 40 million tests reported throughout the country, states vary on the number of tests performed.

Montana, which has 15 counties with zero COVID-19 cases — the state with the highest number of counties unaffected by the virus — has performed over 100,000 tests (9.6 percent of the population.)

Even though some counties have never reported a confirmed case, they are still feeling the effects of the virus in their communities.

Hillary Hanson, who chairs the Association of Montana Public Health Officials and who is also a Flathead County, Mont. public health officer, said she attributes several factors to the low number of cases throughout Montana, including the state’s rural characteristics and the immediate steps taken by counties when the pandemic began.

Prior to the governor’s actions, Hanson said counties took the lead by putting in place health officer orders to look at cancelling events and closing businesses.

“There was some pretty fast action taken from across the state that started at the local level and the larger jurisdictions and then funneled statewide,” she said.

Flathead County had previously gone seven weeks with no cases before a case was confirmed on June 13.

“I think definitely not having cases means that it’s not at the forefront of our communities’ mind,” she said.

Hanson said she cautions residents against the false sense of security that COVID-19 is not present as counties and states reach points where they haven’t had cases for prolonged periods of time.

“I think I would encourage communities to know as cases decrease, [it] does not mean that you should be altering your safety precautions like masking and social distancing,” she said. “If anything, it means what you’re doing is working so continue to do it.”

Larry Dix, executive director of the Nebraska Association of County Officials, said the 12 counties throughout the state with no cases all have significantly low populations and are not located near spots where testing is being offered.

“Most of these folks are farmers or ranchers and so the majority of their day is spent outside and very rarely are they around any groups of people,” he said.

Dix described how counties with zero cases are feeling economic impacts to a small degree from statewide limitations on bars and restaurants opening. However, he said the greater impact for these counties is on rural hospitals.

In Denali Borough, Alaska, Mayor Clay Walker said the borough “has been practicing social distancing since statehood.” There had been zero cases of COVID-19 in the borough until the first case was announced on June 25.

Walker said the borough’s low population and rural environment played a part in having no confirmed cases for a prolonged period of time. The borough has been following mandates and recommendations, even with a large number of residents who are essential workers providing services such as coal mining, power production and defense installation.

Beyond these essential services, Walker said the borough is facing massive economic impacts from COVID-19.

“Granted, the public health emergency has been light here in terms of impacted folks, but the economic crisis has hit us acutely,” he said.

The borough’s economy is strongly tied to the tourist industry, which has collapsed because of the pandemic, impacting small businesses that rely on visitors, he said. The borough is prioritizing small business support in the upcoming months.

Walker explained that the borough previously had one of the lowest testing rates in the state before launching a community testing program, which has significantly increased testing rates throughout June with many visitors and employees screened for the virus.

In Missouri, Hickory County was the only remaining county with zero COVID-19 cases until two individuals tested positive on July 10.

Hickory County Commissioner Keith Mertz said the majority of the county’s population is older than 65 and the county is one of the poorest in the state.

“The statistics show that we should have been hit a long time ago,” he said.

The county, which is centrally located in the state, is a popular tourist destination for the  surrounding cities of Kansas City, St. Louis and Springfield. Mertz said when the cities began implementing stay-at-home orders before the state of Missouri, people flocked to the county, resulting in the sales tax remaining at the same mark as it was at this time last year.

“We’ve had the visitors here and the population has definitely been higher for what it has been from a typical year,” he said. “With the tax revenue the way it is, that tells you everybody’s shopping here and people are coming here because you can’t double the tax rate like that in six months.”

The state of Missouri has performed over 615,000 tests and Mertz said there has been no shortages of tests for anyone in Hickory County who has symptoms.

“It kept us free this long, but I guess it’s ‘wake up and join reality.’ You’re going to get it, it’s just we held out longer than most,” he said.