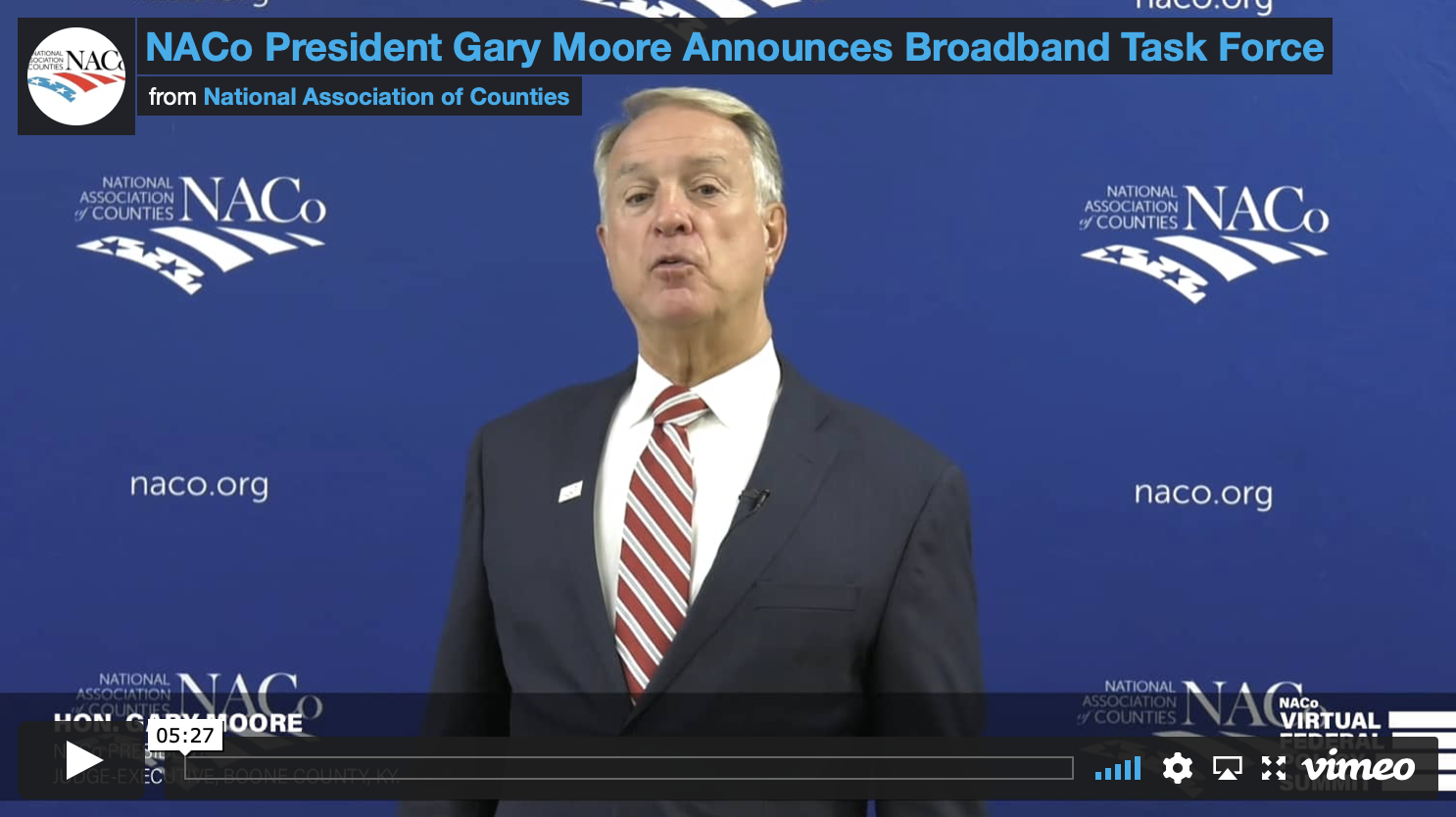 NACo President Gary Moore, Boone County, Ky. judge/county executive has launched the NACo Broadband Task Force in an effort to bring together county government officials from across the country to focus on the challenges and opportunities facing unserved and underserved communities and populations. The task force is starting with the premise that “if you can’t connect…you can’t compete.”

The NACo task force will examine the intersection of public, private and non-profit sector efforts to deploy and sustain advanced, affordable and accessible broadband and other communication technology solutions with the aim of eliminating the digital divide.

In addition to reviewing the current federal and state policy landscape, the group will research and showcase noteworthy practices and innovative solutions involving county governments as essential community partners, as conveners, collaborators, policy makers, regulators, investors and even operators.

At the leadership of the group’s co-chairs, and with the assistance of the NACo Advisory Council, the task force will identify and build on specific policy and practice solutions using the following framework to help draft a blueprint to broadband deployment.  Ultimately, the task force will help develop an overall report as well as other products and resources to assist county officials throughout the various stages of broadband deployment.

The scope of work includes:

A. Preparing for broadband

B. Barriers to buildout

Geography: Cellular vs. fiber vs. satellite vs. emerging technologies

Adoption rates with accessibility, affordability and bandwidth for residential vs. commercial

D. Future-proofing and the “Global” economy

Mid-November: Virtual Convening #1  Task force members will each provide a summary of broadband connectivity challenges and solutions from their respective counties and briefly discuss the scope and mission.  Task force members will also use this session to divide the group into focus areas aligned with the scope and mission.  This meeting with help the task force establish a baseline for the work ahead.

Early January: Virtual Convening #2  Task force members will hear from the Advisory Council representatives on a wide range of topics as it relates to the scope and mission established by the task force. This meeting will help ensure the work of the task force effectively captures the challenges and solutions provided by the private sector and other broadband stakeholders.

Early-February: Virtual Convening #3  Task force members will meet with a variety of federal and state representatives to discuss the unique challenges and solutions to broadband deployment across the country. Guest speakers will include representatives from the Federal Communications Commission, members of Congress and various federal and state agency representatives. Immediately following this meeting, task force members will begin assembling a report and related resources and toolkits to be released during NACo’s 2021 Legislative Conference.

Pre-Legislative Conference: Virtual Convening #4 – Task force members and Advisory Council will meet to make final preparations for the release of the broadband report including key recommendations and findings. This includes sharing noteworthy practices with the federal policy makers, county officials, partners, the general public and media.

The following group of task force members (representing 21 different states) presents a balanced representation of geographic and demographic interests.  As part of the virtual task force meetings, all NACo members will be invited to participate and listen to the task force events through MS Teams Live.

In recognizing the importance of service providers, private industry, academic researchers, and other key stakeholders, the NACo Broadband Task Force will also have access to an advisory council of experts. The Advisory Council will have the opportunity to participate and present during Task Force meetings and other engagement opportunities throughout the course of Task Force efforts.