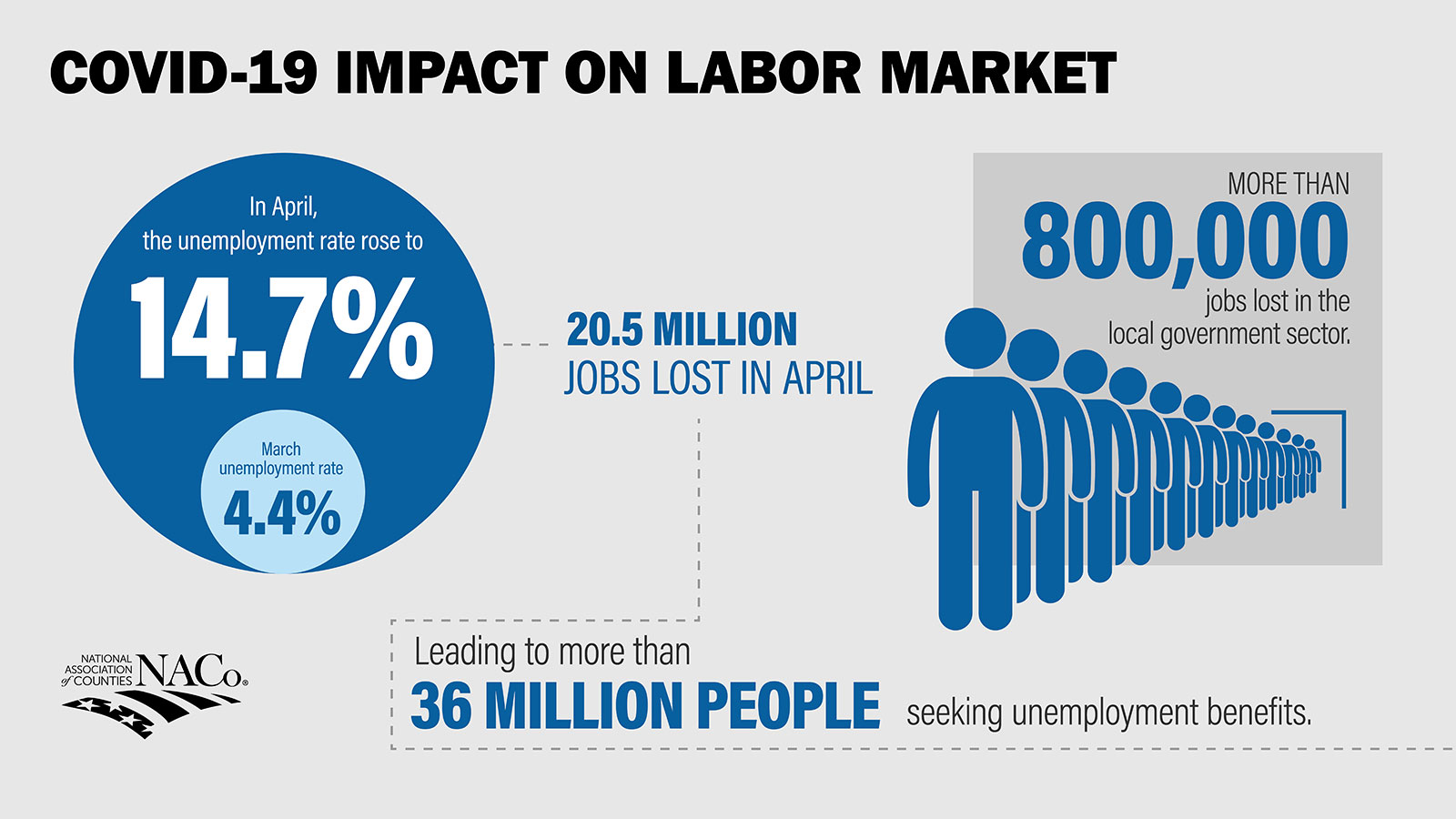 The U.S. Bureau of Labor Statistics (BLS) May 8 released its monthly jobs report for April, revealing a loss of more than 800,000 local government jobs. The COVID-19 pandemic has hit every sector, causing a total loss of 20.5 million jobs and an unemployment rate of 14.7 percent. These economic shocks are impacting county governments with unprecedented challenges. Counties are furloughing workers, pausing nonessential capital projects and reworking devastated budgets while maintaining a commitment to providing key services to residents.

County governments employ more than 3.6 million workers — more than one out of every 100 people living in the United States works for a county. Although not every job in the 800,000 jobs lost in the local government sector was from a county government, this loss represents a major impact to the U.S. labor market and demonstrates the tremendous fiscal impact of COVID-19 on counties.

The 800,000 jobs lost in local government includes 469,000 jobs lost (a 6 percent decrease) from county and city education systems, a natural result of school closings during the pandemic. The other 332,000 non-education jobs lost (a 5 percent decrease) from both county and city governments include anything from law enforcement officers to healthcare practitioners, social workers, maintenance crews, construction workers, administrative support and more. For all government workers (federal, state and local), the unemployment rate rose to 9.4 percent – a massive increase from last April’s (2019) government worker unemployment rate of just 1.6 percent.

Counties anticipate a $144 billion impact to their budgets through the end of FY2021, including $30 billion in increased expenditures and $114 billion in lost revenue. As a result, many counties have already begun furloughing or laying off employees. In fact, over 60 counties — small, medium-sized and large — have been forced to furlough or lay off up to 50 percent of the county workforce due to COVID-19 budget impacts.

The leisure and hospitality industries have been hit hard by the COVID-19 pandemic, with a loss of 7.7 million jobs and an unemployment rate of nearly 40 percent in the sector. Many county economies that rely on tourism, therefore, are especially feeling the impact of the pandemic in terms of shuttered businesses, unemployed residents and lost county revenue. Sales tax revenue has dropped significantly — both what is collected by counties and what is collected by states and shared with local governments.

The unemployment rates for minority groups rose to an especially high level: 16.7 percent for African Americans and 18.9 percent for Hispanics, representing a stronger impact on counties with higher minority populations. Across all groups, except for African Americans, average salaries reached historic highs, a natural result of high unemployment rates in the lower-paid jobs. Average hourly earnings for the private sector increased by $1.34, representing substantial job loss among lower-paid workers and causing concern for counties with particularly high levels of inequality.

Finally, “marginally attached workers” — i.e., those who are willing and able to work, but not actively seeking employment — increased by 855,000 in April, reaching its current level of 2.3 million. This increase reflects a great potential growth in the labor force when the country is ready to return to work and opportunities for employment again become available.

The economic strain of business closures and stay-at-home orders have trickled down to the county level. Counties face revenue shortfalls, rising costs and tough decisions to balance budgets, including adjusting the size of the county workforce while continuing to deliver essential services to residents.

Jonathan Harris is the Associate Research Director with the NACo Counties Futures Lab. He initially joined NACo in January 2015.