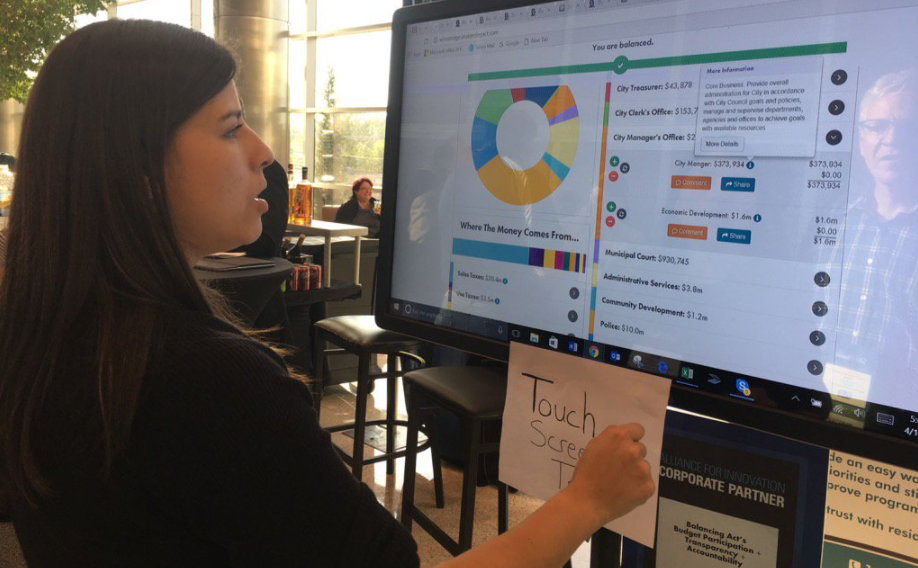 Anyone can try their hand at balancing a county budget using Balancing Act software. Courtesy photo

Looking to show the public how difficult some big budget decisions can be in your county? There’s an app for that.

Facing a $42.1 million deficit, officials in Milwaukee County, Wis., are asking residents to weigh in on budget choices by using an app the county launched June 14 as part of its “Engage Milwaukee” initiative. Amounts to the nearest $100,000 from the county’s budget were loaded into the app — called Balancing Act — with a link to the 2017 adopted budget if the public wants to get into the nitty-gritty details.

“I feel strongly that the community should be heard as we make important decisions about where and how to invest our resources into programs and services that empower more people,” County Executive Chris Abele said.

Of course, there’s nothing new about the general public weighing in on budget matters. Most counties hold meetings, question-and-answer sessions and ask for input from the public. Fairfax County, Va., for example, held two months of public meetings this spring before supervisors recently adopted the budget. The county makes the budget a year-round process, sending out alerts to residents about important updates and Board Chair Sharon Bulova talks about the budget in a YouTube video posted online.

In Maricopa County, Ariz., Allegheny County, Pa., and Converse County, Wyo., officials use OpenGov.com, a site that provides employees and the public with self-service, easy-to-use dashboards to view, filter and analyze financial data for the county.

OpenGov.com and the Balancing Act app are ways to go beyond posting a PDF of your budget online or asking constituents to come to a town hall meeting to speak for three minutes at the microphone.

Using the new software platform, which the county links to on its website, county residents are able to design and share their own budget for Milwaukee County. The tool helps the public more easily visualize and understand the difficulties in balancing the needs of competing priorities with finite resources. The software uses clear language and graphics to describe the county’s revenues and expenses, and then lets users determine their funding priorities. The only catch? They have to balance revenue and spending, just like elected officials do.

A pie chart and list of “Where the money comes from” (property tax, vehicle registration fee, transit fares, etc.), juxtaposed with a “Spending” (transportation, public safety, parks, human services etc.)  list, show constituents where their dollars come from and where they go. When a visitor to the site clicks on one of the listings, it gives them the option of increasing or decreasing dollar amounts. There are also links to more detailed budget figures as well as an email link to the county budget staff.

“We’ve made a lot of progress over the past six years, but Milwaukee County is at a real crossroads,” Abele noted. “With an expected $40 million deficit in the upcoming budget, sustained progress will be difficult, but it’s not impossible. Engage Milwaukee allows the people to make their voices heard as county leaders address our fiscal challenges. I hope to learn from the public and earn their trust as I make decisions about the upcoming budget.”

The county is also inviting the community to continue the conversation on social media using the hashtag #EngageMKE. The goal is to have an “honest, meaningful and sustained conversation” with the community throughout the budget season and beyond. Residents can view and make budget decisions at http://milwaukeecounty.abalancingact.com/.

The app will be open to receive submissions from the public through the end of August. Budget submissions are anonymous and will be received by the county budget office, which will compile all the feedback received over the summer and share it with the community in the fall.

Milwaukee County is only the second county to use the app. The first was Adams County, Colo.

The online budget simulation app gives Joe and Jill Citizen a seat at the table when it comes to budget decisions, either at public meetings or from anywhere using a laptop or phone, said Brenda Morrison, a founder of Engaged Public, a Colorado-based public policy consulting firm that created the app.

One of the recent clients of the app, the City of San Antonio’s Office of Innovation, used the app as part of its campaign to make the city budget process more accessible to the public. That included dividing the budget into category titles that made more sense to the public — instead of applying jargon such as “Department of Public Works,” more understandable titles were often used, like “Streets” and “Community Development.” The city also linked to the app, which was visited by more than 1,200 constituents, on its website and social media sites.