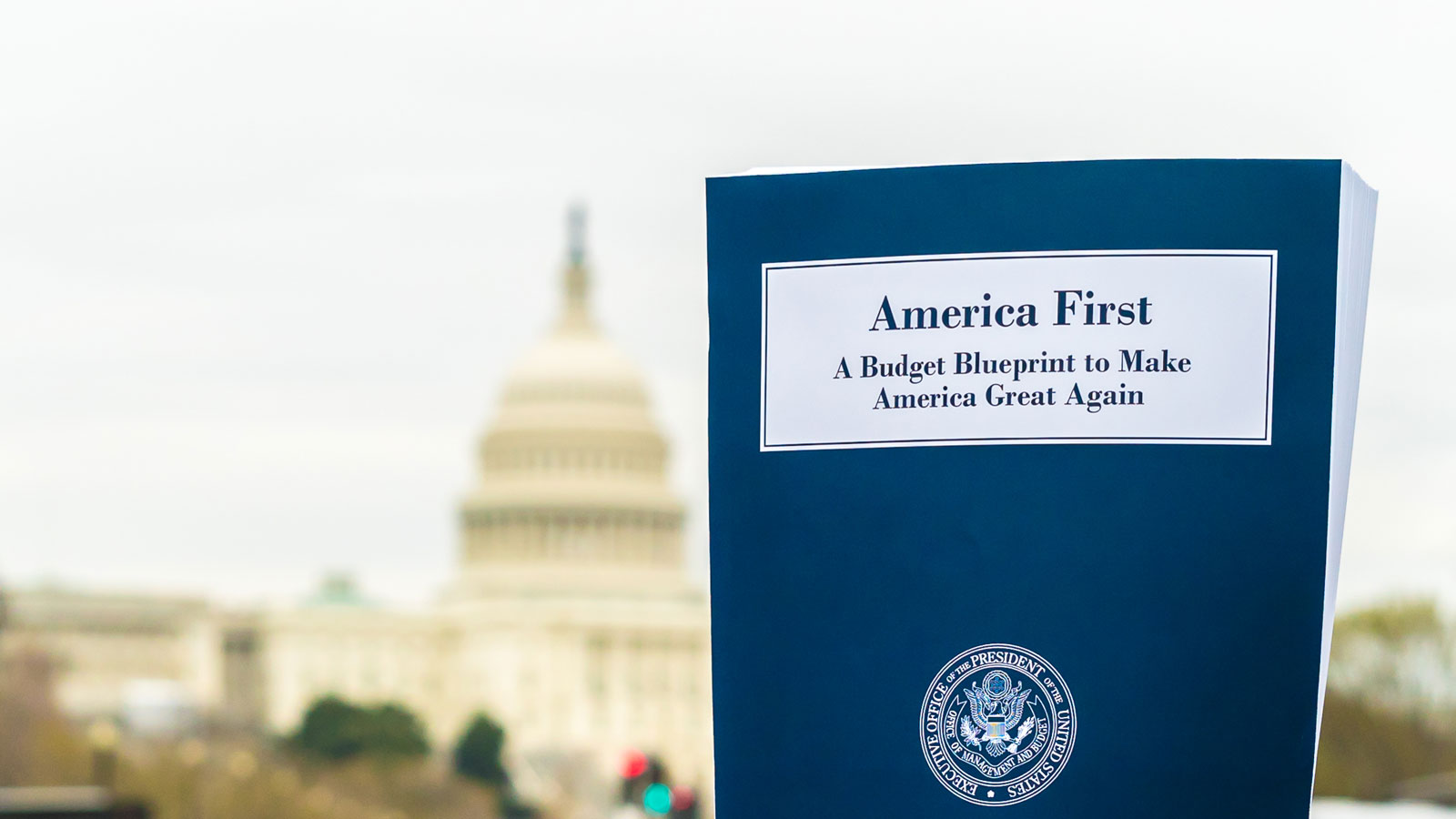 If enacted by Congress, President Donald Trump’s proposed $1.1 trillion FY18 budget would significantly impact the nation’s counties. Trump’s proposal, called the “skinny” budget, follows the tradition of first budgets from newly elected presidents that typically contain fewer details than a normal budget request — thus referred to as a “skinny” budget. It does not include the tax revenue, mandatory spending or economic growth forecasts that make up a normal presidential budget request.

However, the budget does set overall directions for discretionary spending.

Each year, the president submits a comprehensive budget request to Congress in early February which outlines the Administration’s policy and funding priorities and the economic outlook for the coming fiscal year. This budget, which estimates spending, revenue and borrowing levels, is compiled by the White House Office of Management and Budget (OMB) from input by the various federal agencies.

However, newly elected presidents typically submit initial proposals with less details than a normal budget request—thus referred to as a “skinny” budget. The “skinny” budget proposal does not include the tax revenue, mandatory spending or economic growth forecasts that make up a normal presidential budget request. OMB Director Mick Mulvaney said additional budget and revenue details will be released in May and that Cabinet secretaries will be given flexibility in determining how to distribute cuts made to each agency.

President Trump’s “skinny” budget represents the first step in the annual appropriations process. Ultimately, Congress is tasked with the “power of the purse” and must decide whether and how to implement the president’s budget. For the top-line discretionary spending levels in President Trump’s budget to become law, the budget document must pass both the U.S. House of Representatives and U.S. Senate. Both chambers would then set specific spending levels for programs under the various agencies through the annual appropriations process.

OMB Director Mick Mulvaney said additional budget and revenue details will be released in May and that Cabinet secretaries will be given flexibility in determining how to distribute cuts made to each agency.

Following is a summary of President Trump’s proposed changes to federal programs of interest to counties. (Click here for a complete analysis of the impact of the president's proposed budget on counties.)

President Trump’s FY18 budget requests $40.7 billion for the Department of Housing and Urban Development (HUD), a $6.2 billion or 13.2 percent decrease from the FY17 CR level.

CDBG is currently funded at $3 billion in the FY17 Continuing Resolution (CR) and HOME at $950 million. The president’s budget states that community and economic development activities would be devolved to the state and local level, asserting that these governments are better positioned to serve their communities. The CDBG program provides grants to counties throughout the nation, which leverage private and non-profit investment to fund community, infrastructure and economic development projects.

NACo strongly supports adequate funding for both the CDBG and HOME programs.

The budget provides funding for the EPA’s Clean Water (CW) and Drinking Water (DW) State Revolving Fund (SRF) programs to the tune of $2.3 billion, a $4 million increase over FY17. Additionally, $20 million is provided for the Water Infrastructure Finance and Innovation Act (WIFIA) program, the same level as FY17 funding. NACo supports funding for the WIFIA, CWSRF and DWSRF programs.

The budget indicates that the extra funding is intended to help implement the 21st Century Cures Act, which authorized but did not appropriate $1 billion in funding to help states and localities combat the opioid epidemic. Congress already appropriated $500 million of this funding in the FY17 CR. The report by NACo and NLC’s City-County Task Force on the Opioid Epidemic calls for additional federal funding to help communities expand and improve existing efforts to address the opioid epidemic.

Most CSBG funding is distributed to states, which must pass through at least 90 percent of funds to eligible local entities, predominantly community action agencies (CAAs). Since local elected officials must make up one-third of a CAA’s board of directors, counties play an integral role in determining how the block grant is used throughout the country. In fact, CSBG funds reach 99 percent of the nation’s counties. NACo strongly supports CSBG, as it helps counties serve some of the country’s most vulnerable populations, including elderly citizens, people with disabilities and children.

LIHEAP delivers critical short-term aid to the nation’s most vulnerable populations such as the poor, the disabled and elderly, to help them pay for heating and cooling their homes. Previously funded at $3.4 billion in FY16, NACo supports continued LIHEAP funding that aids families during sudden crises, such as significant fluctuations in energy costs, natural disasters and extreme weather conditions.

Although the blueprint does not include details about which FEMA programs would be cut, it targets $667 million in cuts towards FEMA programs that “are either unauthorized by the Congress,” or “that must provide more measurable results to ensure the Federal Government is not supplanting other stakeholders’ responsibilities.” The Pre-Disaster Mitigation Grant Program and the Homeland Security Grant Program are mentioned as examples of the above-mentioned program types.

SCAAP is a grant program that reimburses states and local governments for the cost of incarcerating undocumented immigrants convicted of crimes and receives $210 million annually through the appropriations process. Although immigration enforcement is a federal responsibility, counties incur millions of dollars in un-reimbursed expenses each year in housing undocumented individuals who violate state or local laws. Reimbursing these costs through SCAAP formula-funding helps ensure that counties are not forced to divert funds from other important local programs such as healthcare, social services and public safety, to help carry out a federal responsibility.

Cuts funding for Payments in Lieu of Taxes (PILT).

The budget proposes to reduce funding for PILT by setting the program at its 10-year average funding level. Although specific budget amounts are not available and the FY17 PILT appropriation has not yet been enacted, this proposal could amount to a cut of more than 10 percent for the program in FY18. In 2016, Congress fully funded PILT at $452 million. The program partially offsets the costs over 1,850 counties incur by providing critical services on federal lands.

The budget is silent on the future of the SRS Program. The SRS program provides crucial support to forest counties, schools, transportation infrastructure, law enforcement and other county services in more than 720 counties and 4,000 school districts, impacting nine million students across 41 states. The program’s authorization lapsed on Sept. 30, 2015 and has not yet been reauthorized by Congress. SRS was funded at $278 million in FY15.

The TIGER program awards grants to projects that are generally eligible for funding under existing surface transportation formula programs. The program is currently funded at $499 million through the 2017 annualized CR level. It supports projects such as local safety efforts, including efforts to enhance road safety.

The EAS program is currently funded at $175 million. This elimination of funding would hurt rural counties where EAS services provide a crucial economic lifeline to communities with no airport in their region. NACo supports the EAS program, which assists airlines in serving small communities.