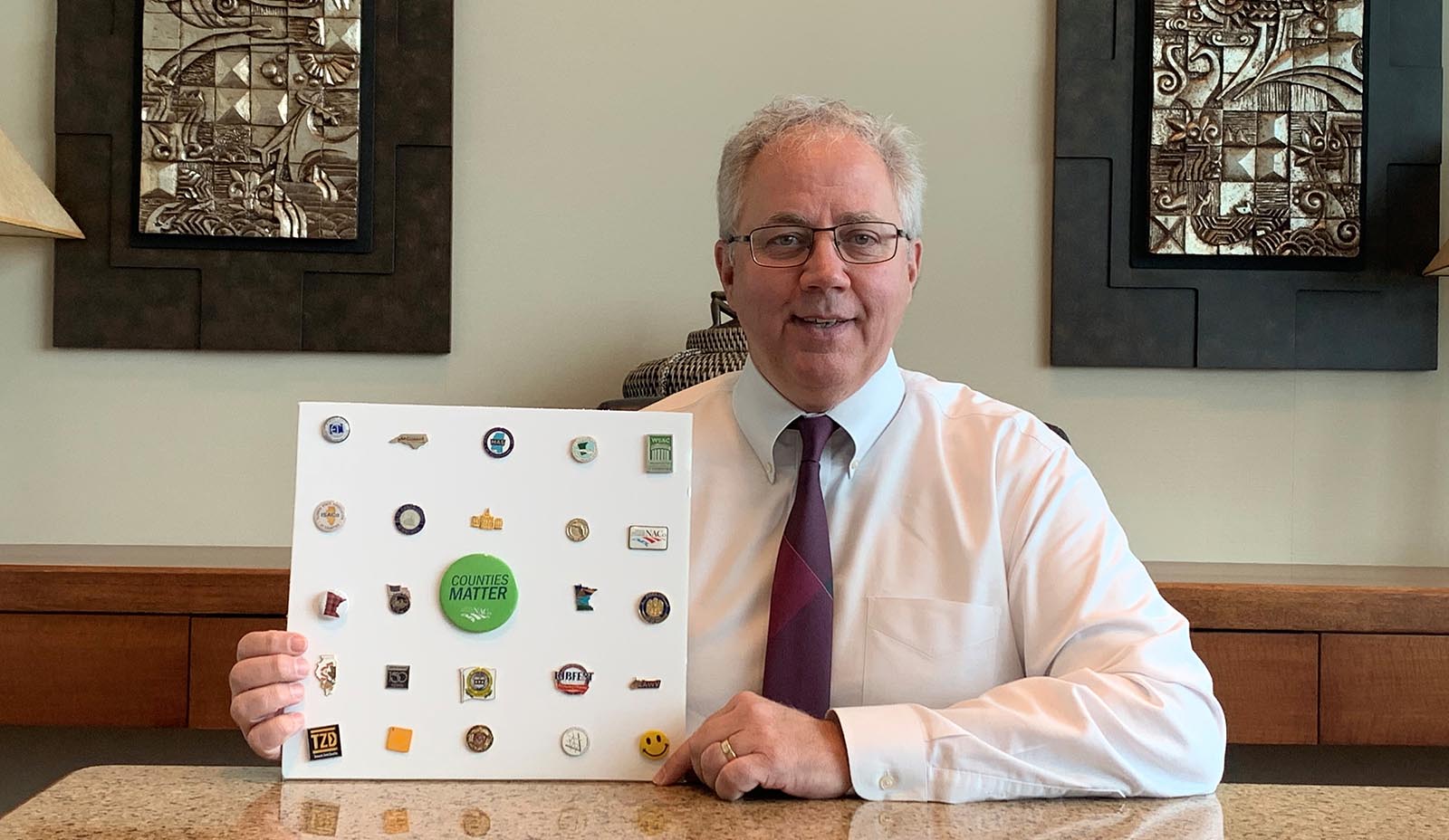 Jim Healy can pinpoint exactly when he knew he wanted to be involved in NACo. Now he is hoping to collect roughly 3,100 other pin points.

“My first year on the (DuPage County, Ill.) Board, I went to the Annual Conference and knew this was something I wanted to be involved in,” he said. “It was obvious it was a great organization and one my county should do more with.”

Healy, who is retiring from the DuPage County Board of Commissioners next fall, is putting the word out for counties across the country to send him their lapel pins that bear the county names and seals. State associations, too. He would like to give that collection to NACo as a way of demonstrating, in physical form, how important the organization has been to him.

“I’ve always collected the pins, I like to trade mine for other people’s,” he said. “There are a lot of fabulous looking pins out there, it’s been fun. I figured I would tie that to my leaving. It might take me a year or two after I leave to get them all.”

Those interactions that would lead to pin exchanges have been central to his time with NACo, which has spanned various committee memberships, including chairmanship of the Transportation Steering Committee.

“I’ve been chairman of every steering committee there is in transportation,” he said. “That’s been my interest since Day One.”

Healy is a real estate attorney who was appointed to the DuPage County Board in 1998 and elected outright in 2000. Between earning an undergraduate degree in urban planning and starting law school, he worked for the Illinois Secretary of State. While with NACo, he has also been a member of the Defined Contribution and Retirement Advisory Committee, Resilient Counties Advisory Board, NACo Board of Directors, Membership Standing Committee and Large Urban County Caucus.

“It’s a place where county officials can get together to get things done,” he said. One of Healy’s proudest accomplishments is the increased cooperation between counties and freight railroad operators.

“A few decades ago, there was no relationship,” he said. “Over the last 10 years, the two sides have gotten incredibly close and work together for their shared benefit. Freight is big in my county,” which is due west of Chicago’s Cook County.

“If a car is derailed or has a fire, the fire chiefs and disaster response personnel can zoom in with a drone to see that number of the rail car and the cars near it, to see exactly what they’ll be dealing with when they try to put it out,” Healy said.

That information shows up in a database and smartphone app available to first responders that allows them to look up the contents of rail cars for the purpose of emergency response planning.

“We know what’s in the cars around it in case the fire spreads. It’s all important information for counties to know because hazardous materials come through on trains all the time.

“It’s the culmination of a lot of relationship-building between the industry and NACo that has paid off for counties and shown what we’re capable of doing when we work together,” Healy noted.

“It’s an ability to do something really powerful,” he said. “It’s not until you’re at a Legislative Conference, sitting in those committees and going through the details that you see how we can affect change like this for all counties. Knowing that work goes somewhere motivates you.”

Healy’s NACo involvement has helped him on the state level. DuPage County is heavily urbanized, but friendships he made with NACo members helped him get to know rural counties’ challenges.

“My family spent four days at (former Commissioner) Jamie Dockett’s ranch in Meagher County, Mont. and I learned more in those four days about rural county challenges than I can count,” he said. “Her county is five times the size of DuPage, but I have more people living in my subdivision.

“Now when I work with counties in Illinois with 20,000 people, I feel like I understand them a lot better.”

Healy also put his stamp on the Transportation Steering Committee. While serving as chairman, he allowed members from the National Association of County Engineers to serve on the committee and he facilitated bonding among committee members. He would encourage them to show up for conferences a day early for a dinner followed by karaoke singing.

“There are times we took over bars,” he said. “We had about 250 people in Kansas City, so many that people had to hang out on the sidewalk. It was wall-to-wall NACo people. Joan Murphy (Murphy, who died in 2016, served on the NACo Transportation Committee and was a Cook County Board member) sang, and she has a beautiful voice, so (former NACo associate legislative director) Bob Fogel and I got up to show people you could do it even if you couldn’t sing to save your life.”

Had Healy known he was going to start collecting pins, he would have taken those opportunities to get started. In lieu of that, counties may send their pins to: Jim Healy
835 McClintock Drive, Burr Ridge, IL 60527.