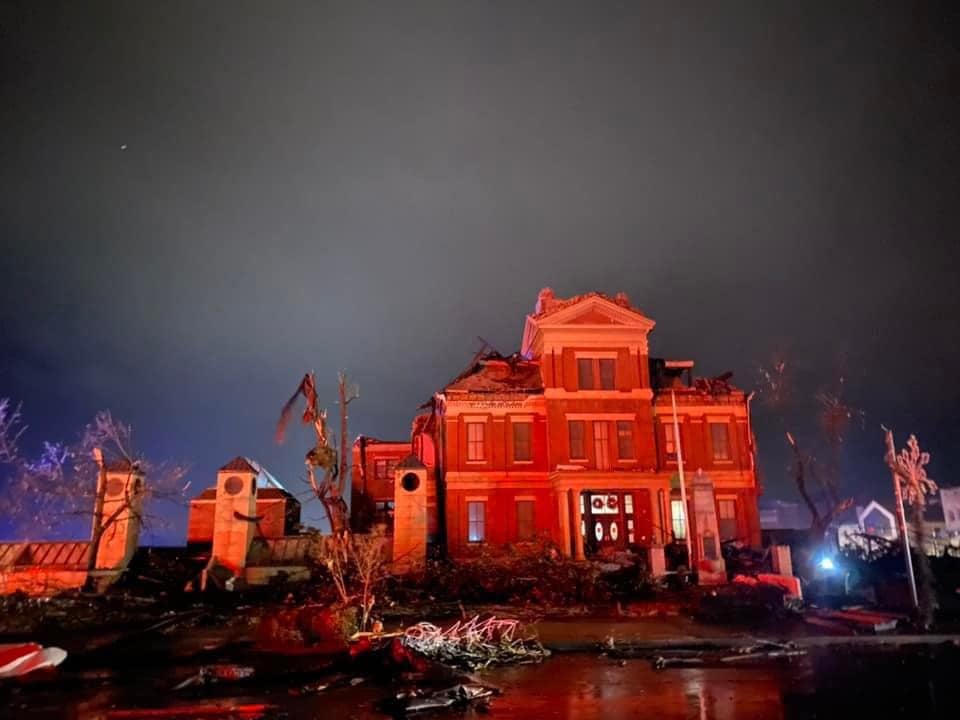 The Graves County, Ky. courthouse lights remain on after midnight Dec. 11 despite significant damage from a tornado the day before. Photo courtesy of the Evansville / Vanderburgh County, Ind. Emergency Management Agency

In order to filter by the "in queue" property, you need to add the Entityqueue: Queue relationship.
A series of tornadoes killed dozens and caused massive damage in Kentucky, Illinois, Tennessee, Arkansas, Mississippi and Missouri

Graves County, Ky. is one of many in the middle-South facing an uphill battle Monday after a severe storm Dec. 10 spawned what the National Weather Service called the worst winter outbreak of tornadoes on record, with at least 30 different funnel clouds.

In counties in Arkansas, Illinois, Kentucky, Mississippi, Missouri and Tennessee, residents have faced below-freezing temperatures over the weekend with little access to utilities. Graves County so far has recorded 20 of the storms’ 74 fatalities — in addition to more than 100 people still missing in the six states — mostly in a candle factory that collapsed. The county’s courthouse in the seat of Mayfield suffered severe damage, as did the county jail. Corrections officer Robert Daniels was killed when a tornado destroyed the building where he was supervising a work crew, WAVE-TV reported. Half of the population of the Graces County jail was moved to the neighboring McCracken County, Ky. Jail.

“Now we're just going through as we are putting together volunteer groups and assessing the situation,” Judge/Executive Jesse Perry said on NPR’s Morning Edition Dec. 11. “We just got an uphill battle at this point. Some things that we’re up against is there’s no power. Food and water [are] being brought in, which — that’s a blessing for our communities. But we’re still having lots of volunteers and EMS and folks going door-to-door making sure to see that folks are OK in the path of the tornado, where the path went through.”

Indiana Taskforce 1 Urban Search and Rescue unit has been deployed to Kentucky to assist the community. They are deploying firefighters as well as search and rescue dogs and other equipment. In addition, 300 National Guardsmen have been deployed.

Perry mentioned on Morning Edition that Mayfield High School, which was serving as a shelter, had a water outage, making relief efforts even more complicated.

“Right now, we’re in transition for those folks that are in the shelter to get them more of a permanent location,” he said.

Perry reflected on the challenge during a Dec. 11 news conference with Gov. Andy Beshear (D), calling it the toughest day of his life.

“The only thing that I could say to you all at this time... what we need from everyone, is we need your prayers, we need your help.”

GoFundMe
GoFundMe trust and safety specialists have certified the fundraisers on a centralized hub for fundraising efforts in all six states affected by the tornadoes.

Salvation Army
You can designate donations for either Illinois and Missouri or Arkansas, Kentucky and Tennessee.