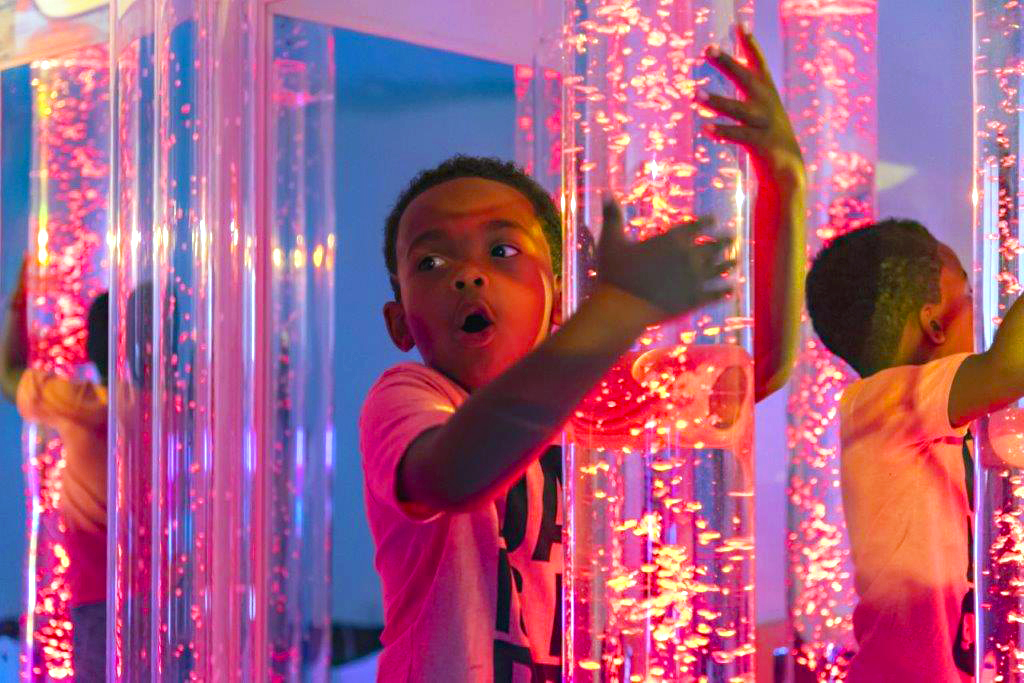 “It was the third day of work,” she said of her former position at the library. “I don’t know what my job duties are, I don’t know what I’m supposed to be doing, so I said ‘Sure, why not?’”

The interaction with the man and his caregiver led to a series of weekly programs held by Alverson and a group of some­times up to 100 adults, children and teens with disabilities.

When Alverson was promot­ed to community engagement administrator and asked for grant ideas, she knew just what was needed: A special needs coordinator.

The grant ended up incorpo­rating more than just that posi­tion.

The Practicing Inclusivity Initiative officially launched in 2018 to create a more wel­coming and accessible space for individuals with a variety of special needs at the Durham County Library system.

Supported by grant funds from the Institute of Museum and Library Services under the provisions of the federal Li­brary Services and Technology Act and administered by the State Library of North Caroli­na, Alverson managed the ini­tiative’s three-prong approach focusing on staff training, in­clusive spaces and inclusive programming.

Alverson said there was a need for staff training within the county libraries to increase employee awareness and hear about the personal experiences from guest speakers who have special needs.

“Through our staff training, we’ve learned it’s never going to be enough, no matter what we do, we can always do more,” Alverson said.

A key aspect of the initiative involved the addition of senso­ry items and inclusive spaces to all county libraries including “bubble walls” and other sen­sory elements.

Faith Phillips, who formerly served as manager of the main library and as the co-project manager for the initiative, said the main library was under­going a complete renovation and transformation during this time, providing a unique opportunity to improve the space’s inclusivity.

The main library now fea­tures three sensory spaces, providing a multi-sensory en­vironment with immersive in­teractive spaces that include color-controlled fiber optic ca­bles that appear like a waterfall to a Vibroacoustic waterbed where individuals can feel vi­brations from music when ly­ing down to a LiteZilla, which resembles a giant LiteBrite.

Renovations included a sensory calming room on the first floor which serves as a multi-sensory environment and includes bubble walls, tac­tile toys and special seating.

“The idea is if somebody comes into the library space and just needs a minute, they’re overwhelmed, there’s too much going on, overstim­ulated, that’s what that room is for,” Alverson said.

Alverson and Phillips worked together to design the sensory spaces, research different sen­sory tools and even modeled spaces after a concept from the Netherlands.

The library held a weeklong, pop-up event while renova­tions were happening to create a temporary multi-sensory en­vironment with bubble tubes, fiber optics and other sensory items.

Over 770 people visited the pop-up space in six days.

“We did outreach events and that combination proved to be very, very valuable, because people who had never heard of the library before were sud­denly going, ‘Oh, we did this here at our place and we can come to the library and have that same program,’” Alverson said.

Phillips said feedback about the initiative was overwhelm­ingly positive.

“The overwhelming re­sponse was ‘the library is for me now,’” Phillips said.

She explained how many families were hesitant to come to the library if they didn’t bring their own sensory ele­ments a loved one needed, but now feel comfortable coming to the space knowing they have access to a variety of tools.