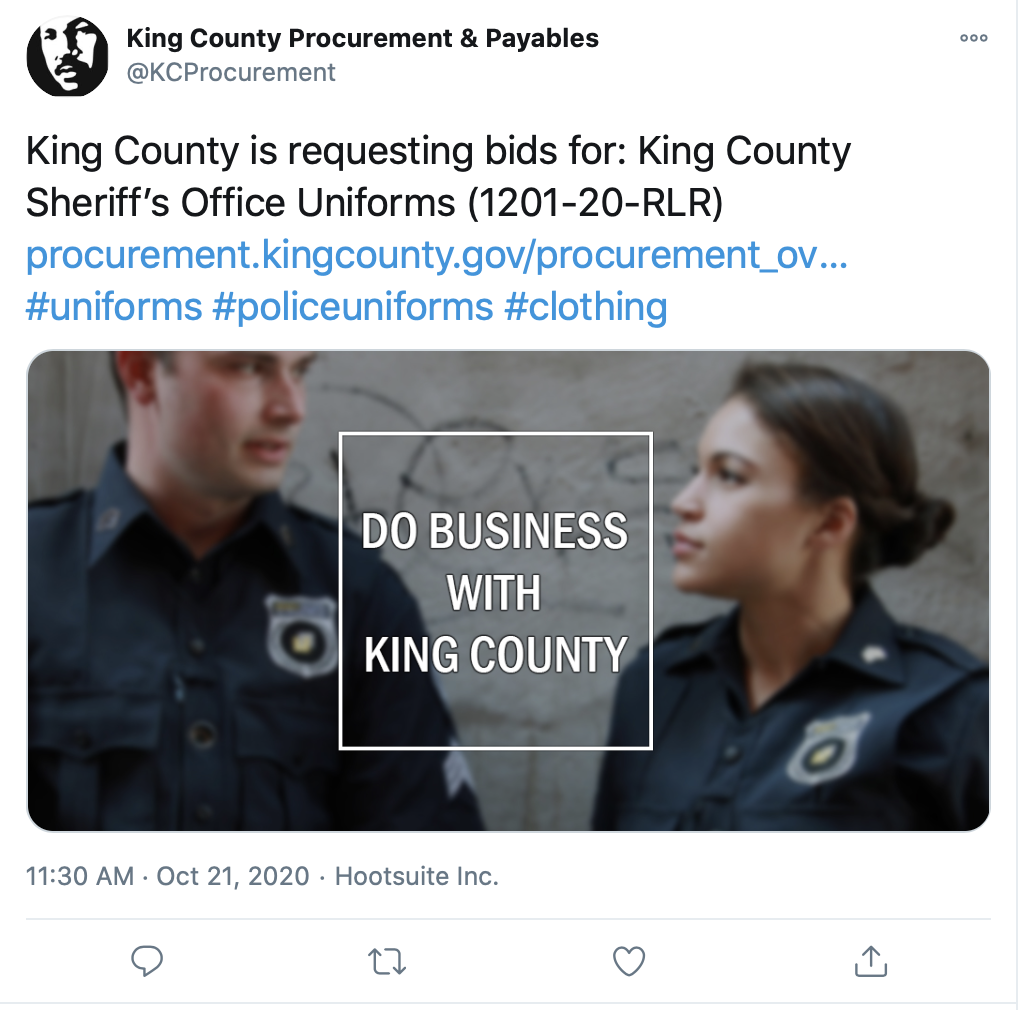 King County, Wash. has found a new use for social media.

The county launched a program in 2019 to improve competition for public procurements and engage diverse business communities by promoting contracting opportunities through social media posts.

The goal of the program is to increase the number of bids received and target suppliers that are underutilized, such as small businesses or women and minority-owned businesses.

King County’s Engaging Diverse Business Communities in Public Procurements program is the recipient of a best in category 2020 NACo Achievement Award in the Community and Economic Development category.

Communications and Training Lead for King County Procurement and Payables Lindsay Pryor said there is a focus on diversity and inclusion throughout the county and for procurement, that is often focused on contracting with smaller businesses.

“Our initial goal was to flat up get more interest in our contract opportunities, but then we realized that it may also be a great opportunity to target those community groups, those suppliers that maybe weren’t getting the message through traditional newspaper advertising,” she said.

Washington has a state requirement that counties must place procurement opportunities in the newspaper of record for the community.

Pryor said they were noticing how expensive it was to place advertisements.

While they are required to place ads, they were spending a lot of money by choice to reach out to other community groups.

“We were finding that there was no large readership for some of those papers that we were spending money on,” King County Procurement and Payables Communications and Systems Specialist Jeremy Zimmerman said.

The social media program uses a mix of free posts and inexpensive ads to promote contracting opportunities. The county started by creating accounts for King County Procurement on LinkedIn and Twitter and then branched out to posting through the King County Facebook page.

The department created templates for each advertisement which includes a short description of the contract, procurement ID number and a link to view the full contract opportunity.

Zimmerman created a small library of images with King County branding to incorporate into each post.

“You get a lot more visibility with anything that has an image and so it just works to try and find images as best as possible that tell folks something about the contract that we’re putting out,” he said.

The department created internal guidelines to describe what posts would look like and reassure county leadership there wouldn’t be any violations of procurement rules.

Pryor emphasized the importance of establishing standards and advised counties looking to create a similar program to be clear with leadership about handling feedback on posts.

“That level of transparency produces trust in government and produces more bidders per contract,” she said.

The department uses Hootsuite, a social media management platform, to schedule posts weeks in advance that are then posted simultaneously on multiple platforms.

Pryor said the department hired a translation firm to create standard posts in seven different languages to post translated phrases into the beginning of each ad. By using social media, Pryor and Zimmerman do not have to track down every community news bulletin to target different languages.

The program has proven to be successful with the number of bidders increasing from 7 to 37 percentage points based on the contract type advertised on social media.

Interest in the posts is driven by what is being solicited, according to Pryor.

“There are some very specialized industries that only have a few people that might ever be interested,” she said. “The number of views we got really depended more on what we were procuring than whether or not it was free or paid.”

Zimmerman said he likes the transparency of using social media to see data metrics and measure how people engage with ads for contracts.

“We can cross reference that onto what impact that has on our number of bids or proposals we get for a contract we advertised,” he said.

“I like the inclusion aspect of it. I think it’s the right message to send that anyone is welcome to come and do business with us,” Pryor said.