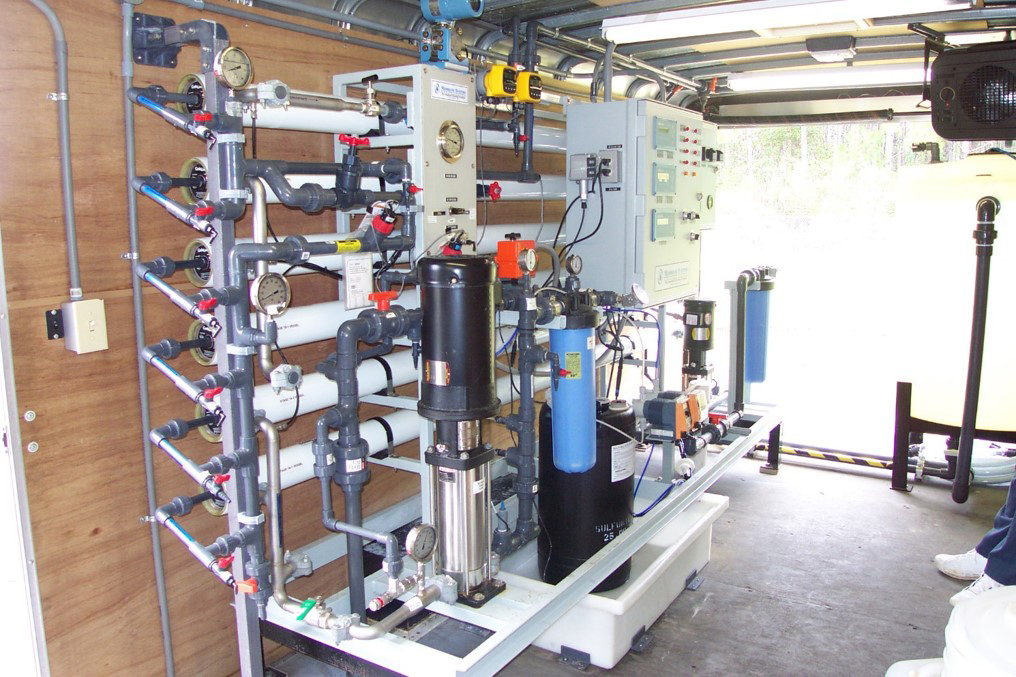 Brunswick County, N.C. is using a low-pressure reverse osmosis system to filter PFAS chemicals from the Cape Fear River. This scaled-down model was tested in 2018. Photo courtesy of Brunswick County

In order to filter by the "in queue" property, you need to add the Entityqueue: Queue relationship.
PFAS, chemical byproducts of some consumer goods and firefighting foam are contaminating drinking water, with hazardous but unknown consequences

Chemicals that are harder to understand than they are to pronounce have found their way into drinking water and are leaving states and local governments wondering how to protect against them and how dangerous they can be.

Per-and Polyfluoroalkyl Substances, known as PFAS, have been used in the production of Teflon, Scotchgard, cardboard packaging and other products since the 1960s. Manufacturers stopped using the chemicals in 2006, but because they don’t deteriorate, these potentially harmful chemicals pose a long-term risk. In addition the U.S. Department of Defense has long mandated use of a particular firefighting foam that contains chemicals in the PFAS family.

These contaminants  have been showing up near military bases, industrial sites and some firefighting testing facilities.

The county responsibility varies among states, with some best positioned to educate the public about this newfound risk, or in some cases, they assume financial burdens to fulfill their obligations.

“Counties in New York are responsible for water quality and enforcement,” said Steve Acquario, executive director of the New York State Association of Counties. “I believe that this is the number one environmental contaminant facing the United States today. The use of these chemicals is so widespread that it will be an issue in every almost state at some point.”

PFAS have been detected in 44 states, according to a Northeastern University study, with the heaviest concentrations in the mid-Atlantic, Rust Belt, southern Appalachians, eastern North Carolina, Florida and California. New Jersey, Delaware and New York’s Long Island have seen particularly heavy concentrations.

Although the EPA has not established a federal drinking water standard for PFAS, it has issued a lifetime health advisory to 70 parts per trillion.

“That’s a couple of eye drops in 55 gallons of water,” Acquario said.

That level was much higher — 400 parts per trillion — before a survey in  Rensselaer County, N.Y. found dozens of cases of cancer, hundreds of cases of thyroid disease and other illnesses in areas of high PFAS contamination.

“It was a big wakeup call. Nobody had thought that the chemical was that destructive,” Acquario said.

New Jersey’s Department of Environmental Protection has proposed limits for different PFAS that could be as low at 13 parts per trillion and a rule that would require all public water systems to begin quarterly monitoring for PFOA and PFOS within the first quarter of 2021.

Brunswick County, N.C. is already moving to address PFAS contamination in the drinking water it draws from the Cape Fear River. GenX, a PFAS produced by a spinoff of DuPont, has been found in the river.

“When you say there’s this new chemical and we don’t know much about it, residents get concerned,” said Ann Hardy, county manager. “At the same time there are reports that these chemicals have been in the water for years, how dangerous are they?”

Brunswick County is in the process of designing and building a $100 million low-pressure reverse osmosis system to filter GenX from the drinking water, to the tune of 12 million gallons a day. The design phase is halfway complete and due to start operating in December 2021.

The equipment will cost roughly $3 million a year to maintain, and the total cost will end up adding roughly $7 more per month for water customers.

“GenX is not well regulated and there’s limited amount of information about it,” Hardy said. “There are some targeted goals around it.”

The EPA has not yet classified PFAS as hazardous, but a group of 30 U.S. senators are hoping to change that with the PFAS Action Act.

U.S. Sen. Tom Carper (D-Del.) told community leaders from Bucks and Montgomery counties in Pennsylvania at an April 8 meeting that attaching the act to the Defense Authorization Act would help ensure its passage.

The classification would make contaminated sites eligible for Superfund remediation and force polluters to take charge of remediation efforts, and ultimately pick up the tab.

Several states have classified PFAS as hazardous and others are pursuing that designation.

In February, the EPA announced a two-year action plan to deal with PFAS contamination. That plan includes: