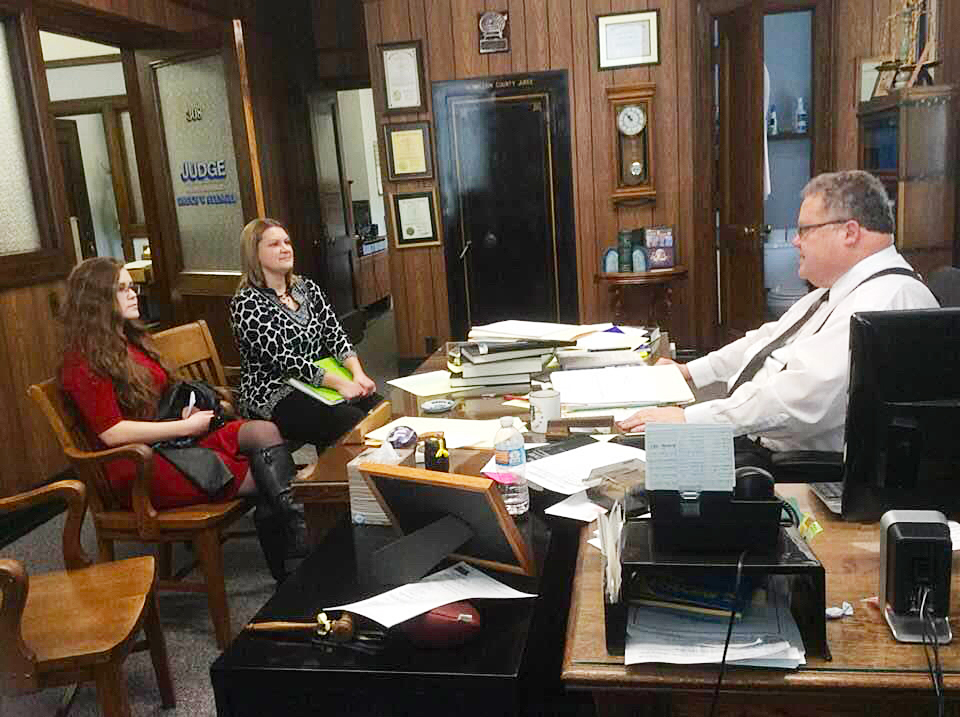 In order to filter by the "in queue" property, you need to add the Entityqueue: Queue relationship.
Vermilion County's mentoring program gives students an up-close look at county operations, including honorary duties during a commissioners’ meeting

The sheriff in Vermillion County, Ind., picks up a high school senior at 7:45 a.m. and heads to the county courthouse. The student enters the courthouse and goes before a judge — but they aren’t in trouble with the law.

These students aren’t being punished. Instead, they are receiving an honor by being selected to participate in the Commissioners’ Mentorship Program.

“I always tell the kids this is the only time I ever want to see you ride in a police car or stand before a judge,” said Vermillion County Commissioner Tim Yocum.

Through the mentorship program, students visit the county courthouse and are assigned honorary duties during a commissioners’ meeting. They gavel the commissioners’ morning meeting and take role.

Yocum emails courthouse employees and asks them to take time out of their day to explain their duties to the students. After speaking with the different county officials, they talk with the judge. If permissible, they may also sit in on a court hearing.

“I thought, ‘How can I get a student to have a firsthand view of government on a county level and also be educated on what every officeholder does?’” Yocum said.

“Politics has a bad name for people who don’t do anything and if I can find young people who have a passion to make the difference for the future of our county, then the county will have a bright, bright future,” he said.

Yocum said he has always worked to get youth involved in the political process by holding voter registration drives and encouraging young people to become poll workers. He said when a Boy Scout asked him to attend a commissioners’ meeting, the idea for the Commissioners’ Mentorship Program was born.

“Every time I see one of those young high school students come through, I think, ‘This could be the next leader of the county or state or maybe the nation,’” Yocum said.

Yocum’s hope for the program is to fill any gaps in school curriculum that doesn’t cover local government, he added.

Many high school seniors who turn 18 take advantage of their trip to the courthouse and meet with the county clerk to register to vote, according to Yocum. Each student who registers gets their photo taken to remember the milestone.

He advises other counties interested in starting a similar program to find passionate teachers in local schools to encourage students to be more civically engaged. Yocum refers to one passionate teacher, Trevor Smith, who teaches social studies at North Vermillion High School. Smith set a goal to register 100 percent of eligible high schoolers to vote. He’s been close to his 100 percent goal for the last few years.

To reach this goal, Smith obtains students’ birth dates and identifies when they will be eligible to register. Then, in his classes of juniors and seniors, he gets students to register with a few taps on an iPad.

“Our real goal is finding young people who are willing to take on the responsibilities of citizenship as well and it’s really been fulfilling for me,” Smith said.

For the mentorship program, social studies teachers from the two high schools in the county alternate selecting a senior to participate in the program each month. Smith said he specifically selects students who have an inclination toward politics or those who he sees as future leaders.

He added that the program makes high school seniors more aware of issues at the local level.

“I’m just eager to see, as the years go by, young people grow into leadership positions, because that’s exciting to watch,” Smith said.

“I’m looking for that potential to maybe be the future leaders; that I can, one of these days when I retire, look back and see the county is in good hands. That’s been my goal,” Yocum added.