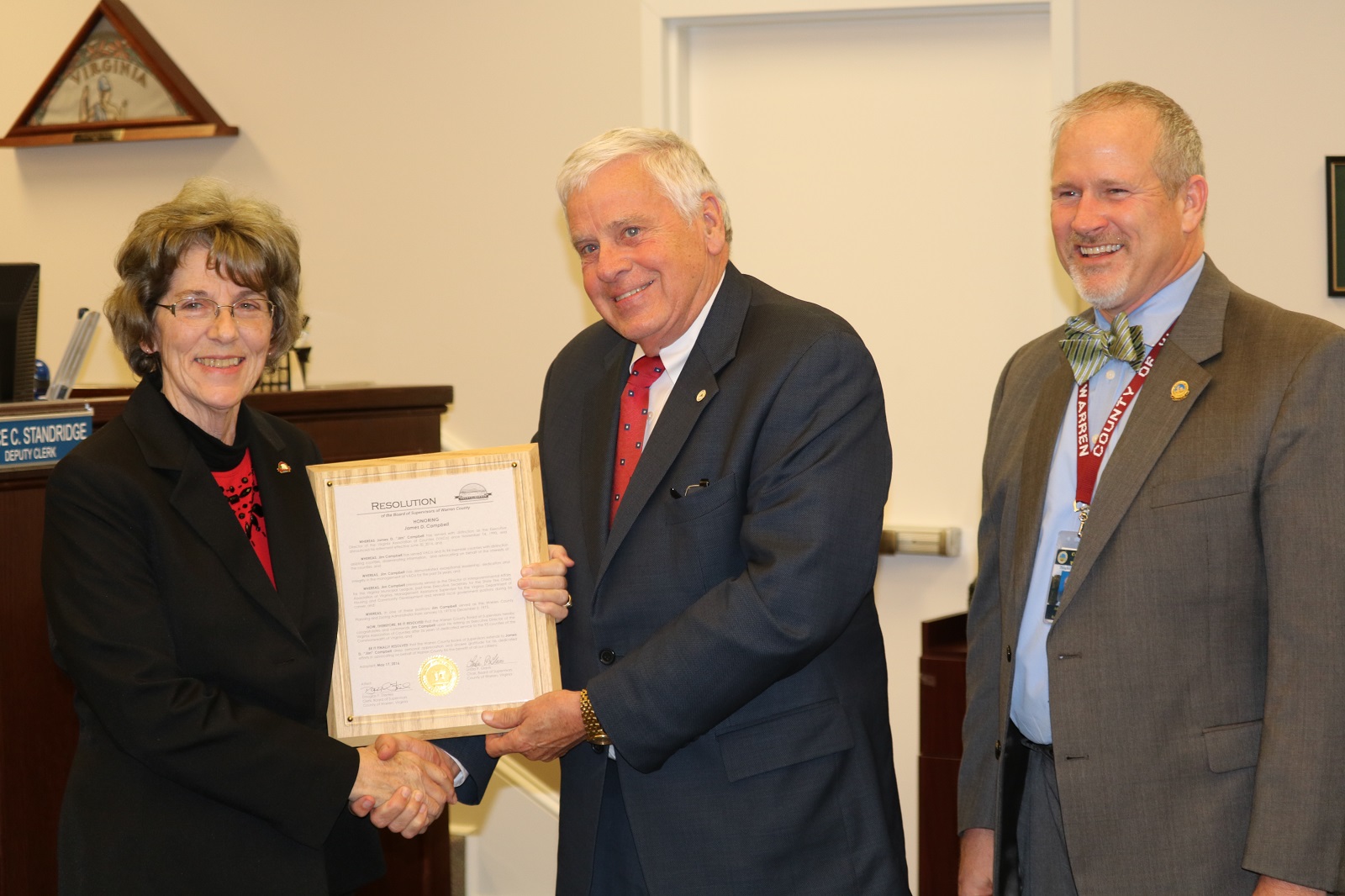 Jim Campbell (center) receives a proclamation from the Warren County, Va. Board of Supervisors honoring his 25-year tenure at the Virginia Association of Counties. At left is then-Board Chair Linda Glavis and to his right is then-Board Clerk Doug Stanley. Campbell served as Warren County's planning and zoning administrator for most of 1975. Photo courtesy of Warren County and VACo.

Jim Campbell, the retired executive director who lead the Virginia Association of Counties for 25 years, died Aug. 17 at age 73 after a long illness.

He was the longest serving executive director in the association's history and when he was hired in late 1990, VACo was suffering financially. Campbell had been intergovernmental affairs director for the Virginia Municipal League, the Fluvanna County administrator and worked for both Henrico and Warren counties.

“Jim took VACo from a small, sort of parochial organization to a very robust, statewide advocacy organization on behalf of all 95 counties,” Fairfax County Supervisor Penny Gross said in 2015, upon Campbell's retirement announcement. At the time, she was VA­Co’s immediate past president.

“I am proud of what we’ve accomplished during my tenure,” Campbell said then, “and believe the association is primed to launch to greater heights in the coming years,”

Lyttle described Campbell as “a visionary in professional associa­tion matters,” adding that through his leadership, “counties have saved millions of dollars.”

In 2008, recognizing counties’ liabilities to account for Other Post-Employment Benefits, he helped form an OPEB Trust that pools funds to earn a higher rate of return on investments. The OPEB Trust currently comprises almost 50 counties, cities and towns investing nearly $1 billion. It’s believed to be the nation’s largest pool of its kind, according to VACo.

He also helped establish the Virginia Investment Pool (VIP). Local governments use the invest­ment program to enhance their return on reserve funds.

Campbell was a bridge-builder, according to Gerry Hyland, a fomer Fairfax County supervisor and VACo’s president in 2002–2003. The interests of Northern Virginia’s bustling Washington, D.C. suburbs are a far cry from those of the peaceful Shenandoah Valley or the coalfields of Southwest Virginia. The Richmond Times-Dispatch, upon his hiring, noted the schism among urban, suburban and rural counties.

“Through his efforts, rural counties and large urban-suburban counties have been brought togeth­er to speak with one voice,” Hyland said, “whereas when he started, I think there was a division among the large and the small that was not a situation in the best interests of all counties in Virginia.”

To many, perhaps Campbell’s crowning achievement was over­seeing the purchase and renovation of 1207 East Main St. in Rich­mond for VACo’s headquarters, a stone’s throw from the Capitol. When Campbell took the job, the association was leasing space in Richmond’s old City Hall.

Under his leadership, the 1866 building was updated with an eye toward preserving its historical significance while developing an environment-friendly LEED-certified “green” building.

Before his illness, Campbell capitalized on his retirement by spending time with his family and traveling with his wife, Christine.

“Certainly I’ll miss the many friends that I’ve made,” he said, “not only in Virginia but across the country — county officials I’ve worked with over the past 25 years and made some great friends. I’ll miss that a lot.”

Gross, who has served on VACo’s board for 26 years, called Campbell’s retirement “the end of an era.”

“But Jim has put together a fine young staff that will continue to pursue the goals of VACo just as VACo has always done under Jim’s tutelage,” she said in 2015.