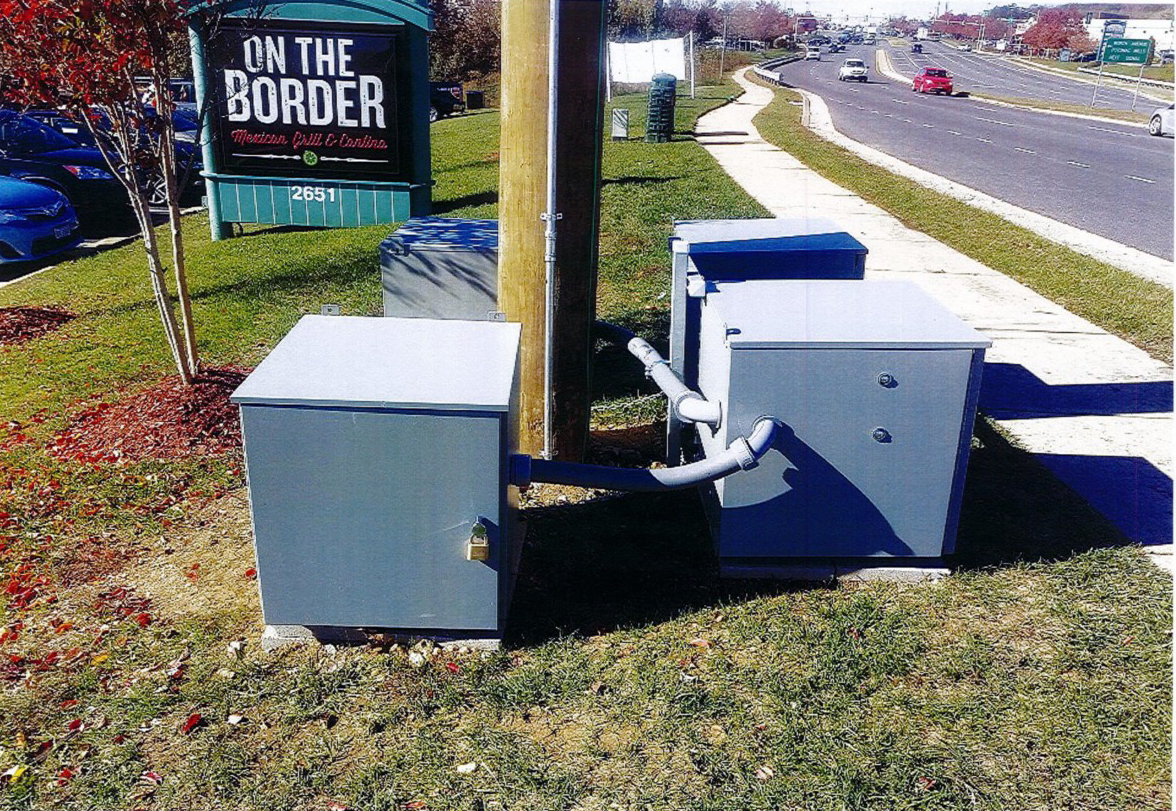 Equipment enclosures for a “small cell” sit in the public right of way in Prince William County, Va. Photo courtesy of Omar Masry

Some members of an FCC-appointed committee looking at how to speed deployment of 5G telecommunications services say the makeup of their group is “going to go nowhere” without more input from local government.

The FCC’s Broadband Deployment Advisory Committee was formed to make recommendations, due in November, on how to streamline local government rules for siting small cell nodes and towers to accelerate the rollout of next-generation telecom services.

While there are no standards yet for 5G mobile networks, members of the telecom industry say to expect speeds 10 times faster than current 4G networks.

The committee, which has met publically two times, is mainly composed of telecom industry executives and members of conservative think tanks, according to the Center for Public Integrity. More than 60 local government officials applied to be on the 30-member committee, only two were initially chosen by the FCC, with two more added later.

The committee’s scant local government representation has drawn criticism from within its ranks.

“This is a serious risk right now — we have a lot of groups who are concerned that they’re not at the table, and if they don’t feel included…it’s those groups we want to adopt model codes,” said committee member David Don, vice president of regulatory policy for Comcast, at the committee’s second public meeting. “I think, just at the end, if we present a model code…and they feel they’ve had an insufficient amount of input, it’s going to go nowhere…One way or another, we’re going to need their buy-in.”

“If [local governments] don’t buy in, this is going to fail and we’ve all wasted our time,” University of Pennsylvania Law School professor and committee member, Christopher Yoo said at the meeting.

The FCC committee has identified 189 local government “barriers” to deployment of broadband but an FCC spokesman said the information could not be shared until the group’s report is made public in November.

Shireen Santosham, chief innovation officer for San Jose, Calif., told the group that local governments have several concerns, including caps on fees that are redeployed to help bring telecom services to areas that are underserved.

Montgomery County, Md. Councilmember Hans Riemer said he applied to be on the BDAC committee and although he was not accepted, he was invited to a closed-door meeting Aug. 29 of the committee’s Model Code for Municipalities Working Group; the FCC said the group is working to “develop fair and reasonable guidelines for the use of public assets to ensure the best overall outcome for all residents.” It is charged with drafting a model code for municipalities to accelerate broadband deployment to be voted on by all members of the committee at a public meeting in October or November.

“I really tried to convey to them that we need a collaborative approach to siting,” Riemer said. “If we get steamrolled, the whole effort is going to get bogged down.”

“There is no one who agrees more than local government that we want to help deliver better services to our residents,” he said. “But getting government out of the way is not part of the solution.”

Paralleling the group’s work, the FCC announced two rulemaking procedures in the spring that look into the 5G rollout issue; but the agency has told the committee that its recommendations may or may not have any bearing on the rulemakings, which “aim to do things like speed decisions by state or local governments on tower siting applications and ease access to utility poles,” FCC Commissioner Michael O’Rielly told an audience in Virginia last month.

Meanwhile in state capitals, local zoning and licensing regulations are under siege.

The Maricopa County Department of Transportation must now allow “small wireless facilities” to be installed on its traffic-signal poles, MCDOT spokesperson Nicole Moon recently told the North Phoenix News. The units are not to exceed roughly the size of an end table. Small equipment boxes will typically be mounted on the poles or nearby.

California: Counties are urging Gov. Jerry Brown not to sign SB 649, which passed Sept. 14. The California State Association of Counties estimated a loss of $100 million a year due to decreased fees. CSAC said “… locals wouldn’t be able to require in-kind public services (such as Wi-Fi access or connecting civic amenities to fiber) in exchange for the use of these publicly-owned structures. Evidence that the bill is even needed is lacking, as jurisdictions around the state have already worked collaboratively with providers to install similar antennas on publicly owned poles.”

In a column published in The Sacramento Bee, CSAC called the then-proposed legislation “a triple rip-off: Neighborhoods lose flexibility to address visual blight, taxpayers get shorted by limits on lease revenues and residents still pay the same high prices for their wireless services. At the same time, these providers still won’t serve many of California’s disadvantaged communities.”

Florida: New law HB 687 signed June 23 by Gov. Rick Scott (R) caps attachment fees at $150; Florida counties stand to lose as much as $145 million in fees annually, according to some estimates. Six counties had issued moratoriums on the placement of the equipment. “It really takes away our ability to regulate cellphone facilities on our right of way,” Seminole County, Fla. Commission Chairman John Horan recently told the Orlando Sentinel. “These are in the right of way. They belong to the public, and these are private cellphone companies using the right of way.” Counties have until Jan.1, 2018 or three months from their first application to create local ordinances that adhere to the new law.