In doing so, the former mayor of South Bend, Ind. acquiesced that counties were probably the most influential component of the local and state government equation for bills that will benefit them dramatically.

“You have so many more highway miles and road miles under your responsibility than mayors who usually get the first phone call,” he said. “You have public health responsibilities that very few people thought much about until everything depended on it. You have so many functions that the public does not understand and are less likely to get attention for, except when something goes wrong.”

The infrastructure agreement, representing the largest federal investment in virtually every mode, serves a variety of constituencies in every situation, including high-speed internet, transit, roads, bridges, ports and more.

“That means better and more extensive service, yes in our biggest cities but also in rural communities that depend on transit, that depend on paratransit in so many ways,” Buttigieg said, noting that advocacy by county officials will be necessary to ensure the bipartisan agreement on the bill extends beyond the group of 10 senators who negotiated it.

“Everyone in the National Association of Counties is in a position of power, but even more important, a position of trust and credibility to help bring the bipartisan infrastructure framework across the finish line. We’re looking at you to do just that,” he said. “It’s amazing how challenging it sometimes is to get Congress to agree to something that overwhelming bipartisan majorities of Americans and local officials already overwhelmingly want.

“This is a bipartisan moment around a shared priority.”

Buttigieg pointed out that game-changing American infrastructure projects, including the transcontinental railroad, New Deal and the interstate highway system, involved ferocious debate and compromise and went beyond being foundations for job growth and economic success and helped unite Americans by connecting them.

“If you believe that the bipartisan infrastructure plan will help the country, this is the time to make your voices heard,” he said.

The plan would put Americans in a position to capitalize on technology as workers and as consumers, he said. The half-million electric vehicle-charging stations, for examples, would be located in communities large and small.

“There are so many Americans who would benefit so much from the fuel savings that are available if we can move into that electric vehicle future,” Buttigieg said. “And make no mistake, it’s coming either way. The question will be whether it will be made in America — we’re going to work to make sure that actually happens.

“When we talk about these jobs, they sound so futuristic that it’s hard to imagine them,” he said. “But we’re talking about jobs that exist right now.”

The broadband expansion that would bring high-speed internet to previously underserved communities would serve not only as an economic equalizer, but help rural areas reverse their population loss, allowing them to compete for remote workers.

“These investments will create a generation of good-paying jobs, the majority of which will be available to workers whether they have a college degree or not,” he said.

Buttigieg made two promises to great applause from the gathered county officials.

“State and local funding from the American Rescue Plan will not be clawed back as a ‘payfor’ for the bipartisan infrastructure package,” he said, addressing fears that had been circulating for weeks.

“The Department of Transportation will work with you to be as user-friendly as a  federal agency has ever been, because you shouldn’t need a full-time staff of federal relations professionals to figure out how to get support from an agency in Washington." 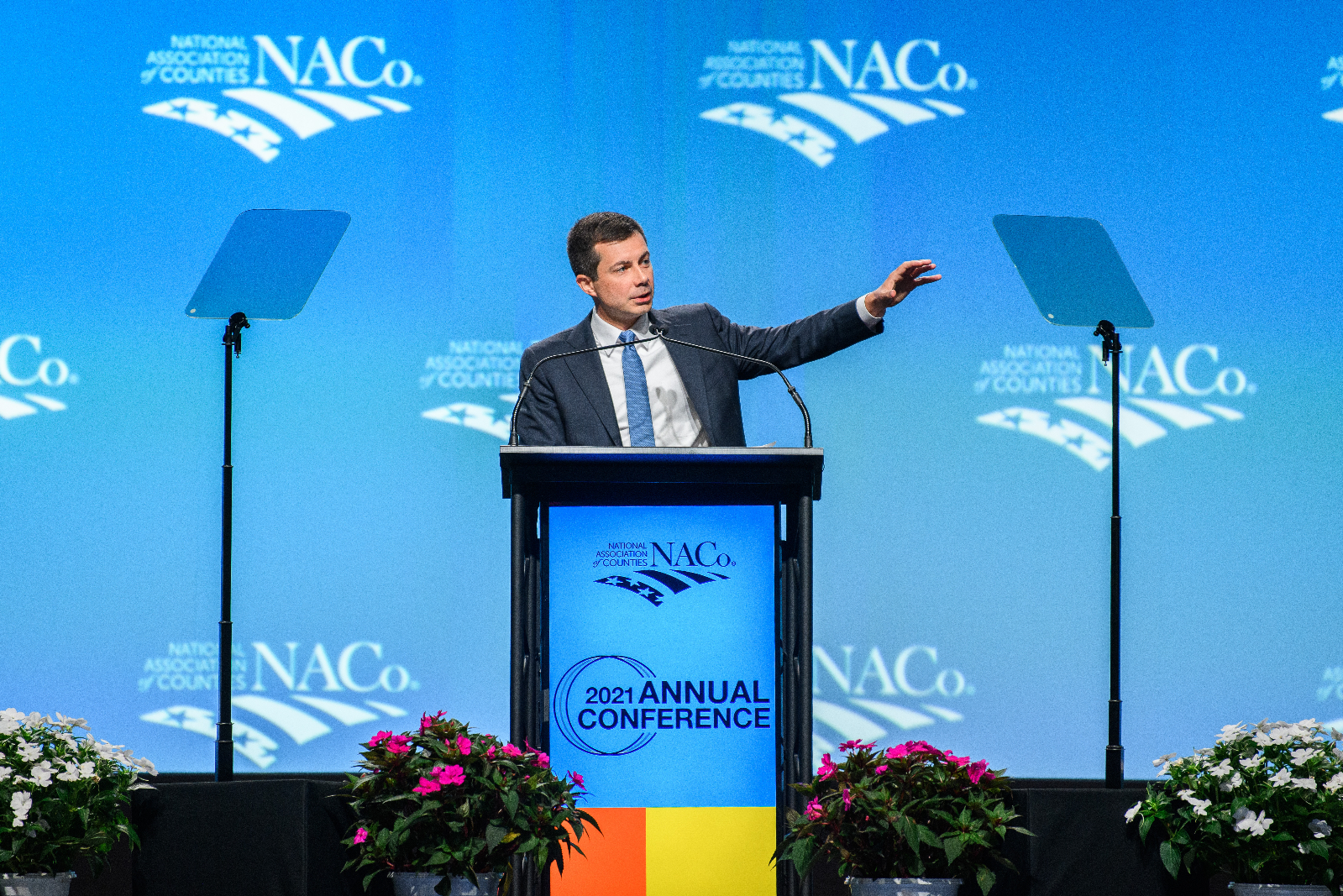