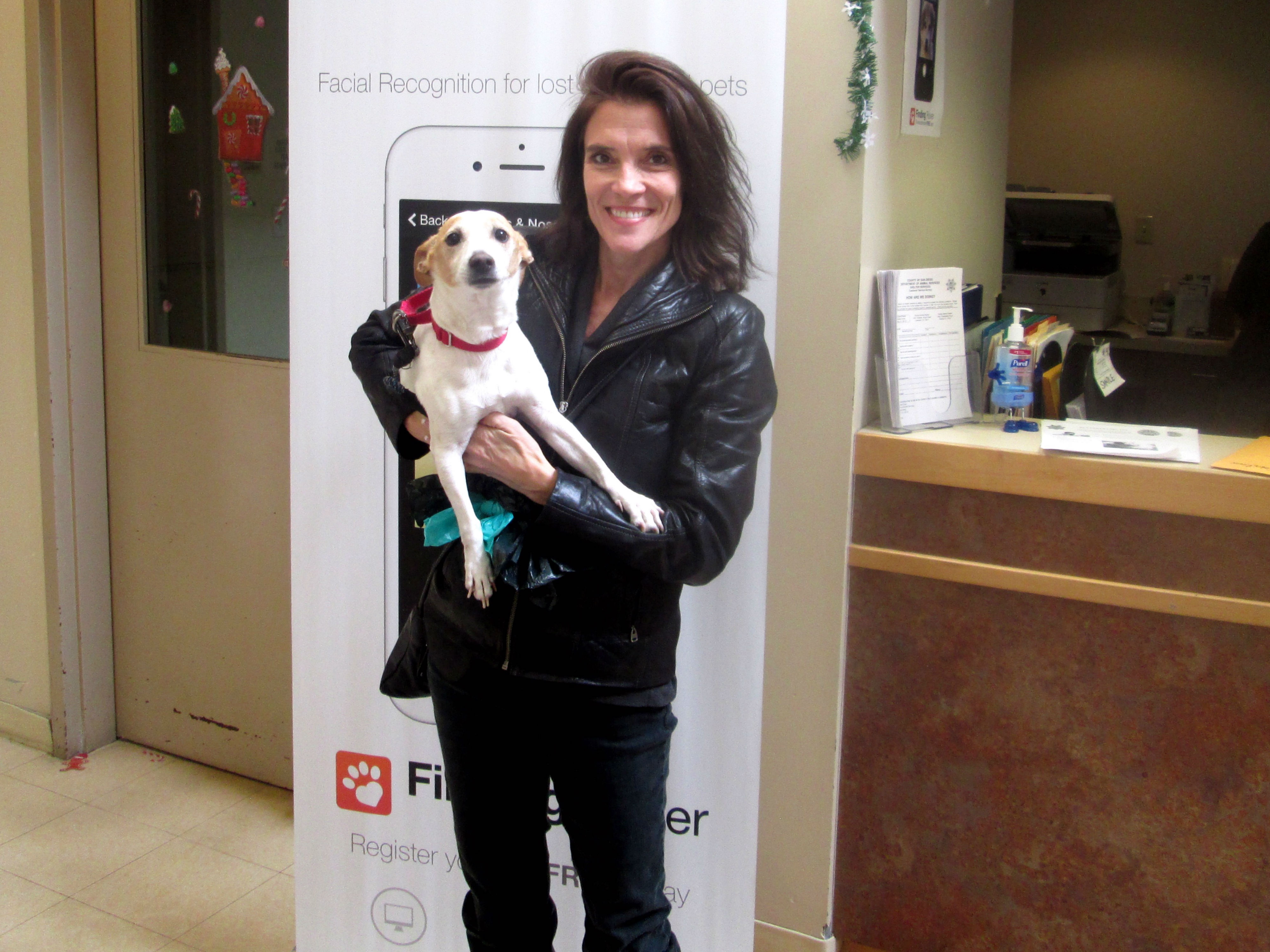 County animal shelters across the nation are finding that Finding Rover when he’s lost is a little easier these days.

Montgomery County, Ohio, San Diego County, Calif. and Washoe County, Nev. are among those that are using the Finding Rover smartphone app, to help reunite lost dogs with their two-legged best friends. One shelter director says it’s saving money because lost dogs are spending less time in their kennels.

The free app uses facial recognition that’s so good — 98 percent accurate, according to Finding Rover — that it helped San Diego County Department of Animal Services match a lost Shiba Inu dog named Roxy with a photo of her wearing sunglasses. Less than four hours after she was taken in, her owners found her by using the app.

Roxy was the shelter’s first success in 2014, when it became the first sheltering organization in the United States to partner with Finding Rover, the app’s creator confirmed. Since then, the shelter has reunited at least 15 dogs with their owners, an official said.

Finding Rover works like this: dog owners or shelter operators download the app, Android or Apple, and set up an account; this can also be done on the web. The pet’s owner must upload a full-face picture of the dog (there’s no Finding Kitty app for cats…yet).

To recognize the face, the user lines up three circles the app superimposes on the photo with eyes and nose, making a triangle. And voila, you’re in the system. Shelters that are Finding Rover partners must also upload photos of all the lost dogs they’re keeping.

“It saves us money,” explained Mark Kumpf, shelter director for Montgomery County, Ohio. “We figure the average cost per dog that comes into a shelter depending on the system and the number of days it has to stay can be anywhere between $160 and $225 dollars. Imagine how much money you save when the dog never has to go to the shelter.”

Pet owners save, too. “They don’t have to come and pay an impoundment fee and a board charge,” he added. “It’s a great way to put people in touch with their lost pets.”

Dan DeSousa, deputy director of San Diego’s shelters, said there are no concerns about data security. “Your information is locked away. The only time it actively does any matching is when the computer says this picture matches that picture.”

When Montgomery County’s Animal Resources Center got involved, Kumpf said, the county signed a memorandum of understanding with Finding Rover.

“The M.O.U. simply says that we’re going to provide the information to Finding Rover, and we’re both going to keep that information private. We’re not going to market to people based on the information,” he said. There are no ads or in-app purchases.

Even for shelters that don’t maintain a photo database of impounded canines, Finding Rover can be helpful, Kumpf said. “If you are an individual officer or individual employee — and you don’t have a policy that says no — you can download Finding Rover on your own smartphone, tablet or what have you, and when you pick up a dog, you, the individual officer, simply take a picture and say ‘Hey, I found this dog and it’s going to be at the shelter.’”

Kumpf’s is the Dayton area’s largest animal shelter, taking in over 7,000 dogs and 3,500 cats per year. DeSousa’s shelters take in, on average, about 12,000 dogs annually.

“It’s your pet’s lifeline,” Kumpf said. “You can lose tags; people can scan for microchips and not find them. But you know what? That picture, with … almost 100 percent accuracy, if someone else finds your dog, Finding Rover is going help you find its way home, and it’s free. Why wouldn’t you do it?”

Finding Rover’s founder and CEO, John Polimeno, is a retired California construction company owner. He first got the idea for the app and website when he saw a lost-dog flyer on a telephone pole while dining out, said DeSousa, who has spoken with him. Polimeno said it reminded him of when he lost a dog as a kid.

“He reached out to the big-name IT companies that do facial recognition for humans… and they all kind of laughed and said it can’t be done, one dog looks like another dog,” DeSousa said. But Polimeno wasn’t dissuaded. He took his idea to the University of Utah’s Software Development Center and said “Can you guys help me do this?”

It took them two years to develop proprietary facial recognition technology that could do the job, according to Finding Rover’s website.

DeSousa said it was a no-brainer for San Diego to get involved; his shelters were already photographing strays they took in, although they did have to switch from taking side profile shots to face shots.

In Northern California, the Solano County Sheriff’s Office joined Finding Rover last month. The Animal Care Division registers every dog that enters the county’s shelter with Finding Rover, and it also uses the service to show off dogs that are available for adoption.

“Discovering your dog is missing can be heartbreaking for a family,” Solano County Sheriff Thomas Ferrara said in a statement. “We want to do everything we can to reunite you with your beloved dog as soon as possible, and Finding Rover is an innovative tool to help us do that.”