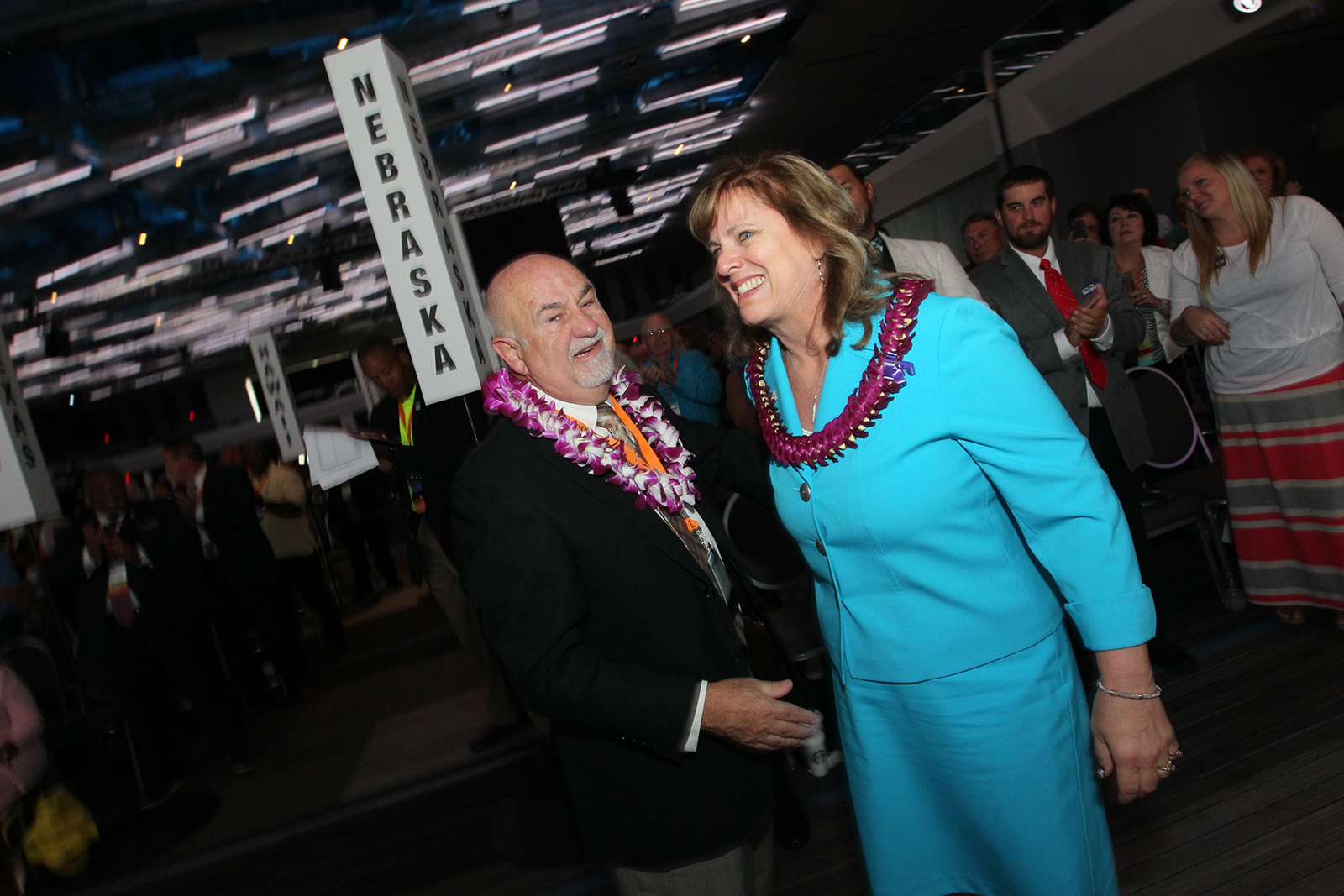 Douglas County, Neb. Commissioner Mary Ann Borgeson heads to the stage to give her acceptance speech after her election as NACo second vice president. Larry Dix, executive director, Nebraska Association of Counties, cheers her on.

At the closing general session, attendees heard from Fox News host Lou Dobbs, who has drawn praise from President Trump for his commentary, and record-breaking mountaineer Ed Viesturs, who  has successfully reached the summits of all of the world’s 8000-meter peaks without supplemental oxygen.

Conservative commentator Lou Dobbs praised the Trump administration Monday afternoon in his speech to NACo members, saying he’s more optimistic than ever about the U.S. economy.

Trump is working to wipe out drug cartels, improve schools and renegotiate NAFTA, Dobbs pointed out. But Dobbs said “you won’t hear that” from news outlets like The Washington Post or “Bezos’ Blog,” as he called the newspaper, which is owned by Jeff Bezos, founder of Amazon.com.

Dobbs, who also took swipes at Presidents Bill Clinton, George W. Bush and Barack Obama, made his remarks during the General Session that closed out the association’s Annual Conference in Franklin County, Ohio.

The host of “Lou Dobbs Tonight” on the Fox Business Network repeatedly touted the president and his policies despite Trump’s low approval ratings.

Dobbs signed copies of his book Putin’s Gambit: A Novel, which he co-authored with James O. Born, after his remarks.

Ed Viesturs, the only American to climb all 14 of the world’s 8,000-foot mountains, said even with all of the support from his teams, sherpas and sponsors, he could not have done it without something internal — passion.

“If you love what you do, it doesn’t matter how long it takes or how hard it is,” he told the General Session audience.

He drew several other universal truths from his life as a mountaineer. For instance, properly framing every goal.

“People think you get to the summit and you’ve achieved your goal, you celebrate,” he said. “I got to the summit and I had to get down. Lots of people don’t budget (their supplies) for the round trip and that’s a huge mistake in mountaineering.”

In any pursuit, you have to be comfortable being uncomfortable. During his first of six successful Everest ascents, he was taking 15 breaths for every step. “Imagine that’s all you do for 12 hours,” he said. “That’s the price you pay, if you’re willing to push through those barriers.”

He stressed recognizing the value of hard work and avoiding taking shortcuts — because in his experience the consequences could be deadly on a climb.

“I saw lot of my peers who step over the edge, break the rules,” he said. “We call this complacency; just when you think you’ve got it figured out, you don’t. I don’t want to break those rules I’ve been living by because those rules kept me alive.

At the same time, you have to properly give credit where it is deserved.

“The sherpas do most of the work,” he admitted.

And ultimately, along with passion, internal motivation and goal setting is the purest driver.

“When I got to the top of Annapurna (the last eight-thousander), it was my dream come true,” he said. “ESPN isn’t up there to interview you, there’s no medal, no trophy, no bonus check. It’s all very personal.”

What your county can do to battle ‘fake news’

During a Q&A at a “County Communications and the Challenge of Fighting Fake News” session Monday morning, Robert Wilson, county administrator for Cass County, N.D., had some advice for his fellow county officials.

Wilson, a former TV journalist, said that counties willing to make the effort to help reporters on a regular basis will be paid back with better coverage. He made his comments at NACo’s Annual Conference in Franklin County, Ohio.

“Most of the time those are probably folks fresh out of school, they probably have five or six stories that need to be done that day, and if there’s anything we’re most likely combating, it’s their lack of knowledge and their lack of time to put into the story,” he said.

“I would say if there’s anything that on a 95 percent or 90 percent basis that you can do to make that story, that end product better, is just work with them,” he said. “Take a little time, slow down, answer some of the questions that you think may be the baseline knowledge that you and your staff and your commissioners have been working on for months. They probably don’t know it. That’s what their reality is, and what they’re dealing with.”

Donnell Preskey Hushka, government relations/public relations specialist with the North Dakota Association of Counties, talked about her experience stepping in to help with communications during the protests over a controversial pipeline project in Morton County, N.D.

An economist, a construction executive and a social engineer walk into a workshop, and update county officials on trends in labor and workforce.

Brian Schaitkin, senior economist at the Conference Board, explained the components of the Labor Shortage Index, which measures risk, over 10 years, that a given occupation will experience labor shortages compared to other occupations.

“The most likely fields to experience labor shortages are the skilled trades,” he said. “Not many young people doing into the field, but automation in construction is much more challenging,” so such jobs seems to have a strong future.

He said immigration could be one of the key ways to address labor shortages, particularly in healthcare and science, technology, engineering and math fields.

“Our mantra is to take tax users and turn them into taxpayers,” he said. “Training is hands-on,  and last day of training with us is just like the first day on the job with their new employer.”

At the same time, although it is vocational training, Courson saw more than that.
“I look at us as the liberal arts,” he said. “Yes, we train students and place them in jobs, but we want them to explore the career paths beyond being in the trades themselves.”

Terry Green, CEO of Think Make Live, described his organization’s approach to leadership development for at-risk youth 16-24, which has participants alternate between a week of classroom instruction to finish high school or earn a GED with a week of learning skilled trades.

“Just because I was incarcerated doesn’t define my life, my future, who I’m going to be tomorrow,” he said.