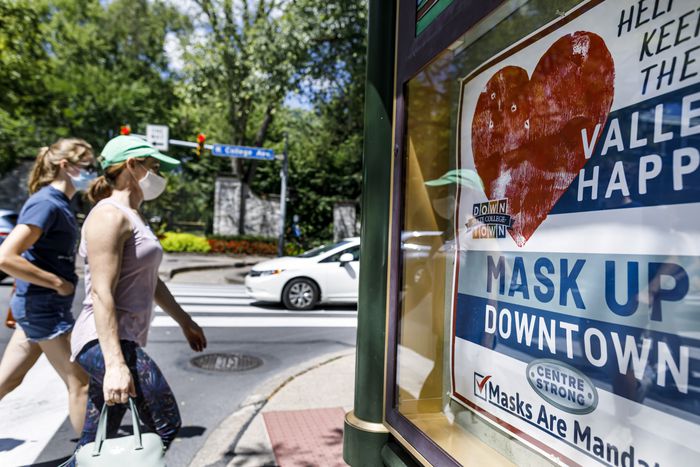 Students walk by a sign on the corner of College and Allen streets on Penn State University’s campus in Centre County, Pa., reminding individuals to wear masks as part of the Centre Strong campaign. Photo by Dan Gleiter/PennLive.com

In 203 counties where students make up at least 10 percent of the population, approximately 50 percent experienced their worst weeks of the pandemic since Aug. 1, according to a review by The New York Times.

Many counties are juggling COVID-19 cases among students while working to protect county residents outside of the student community.

The city of East Lansing, where the university is located, saw a 315 percent increase in total case counts since Sept. 1. An outbreak among students at the university drove the case count and comprises 80 percent of all new cases, according to a release from the county.

“I do not take this lightly, but there is an outbreak centered on Michigan State University and it is quickly becoming a crisis,” said Ingham County Health Officer Linda Vail in a statement.

Cases within the student community at the University of Arizona in Pima County also continued to increase throughout early September leading to similar self-quarantine recommendations for students.

“We felt fairly strongly, especially when we looked at our census track data and the longitudinal tracking, that we were having significant escalation,” Cullen said.

“Our concern — and it’s still a concern —  is we can use the term ‘leakage’ to describe leakage of the pandemic into the surrounding neighborhoods,” Cullen said.

Centre County Commission Chair Mike Pipe said the county is working with the university, the state department of health and other stakeholders to launch the COVID-19 Response for Emergency Assistance to Counties Team (C-REACT), a task force to reduce positive cases on campus and in the surrounding community.

“That C-REACT team is basically going to be coming in and working specifically on actionable things that can occur — crunching data, looking at tests and it’s going to be a focus group and reduce approval times,” he said.

Pipe said the county has also been involved in an initiative created by the chamber of commerce and the university called Centre Strong, which created procedures for students moving back to campus and helps relay information regarding university cancellations.

“I think our challenge right now is to stop the spike and get to the plateau. Then if we are plateauing or just even decreasing, just really hammer that home and make sure we are not seeing continued spread,” Pipe said.

In Albany County, N.Y., officials traced the vast majority of new cases back to the University at Albany, part of the State University of New York school system. Over a recent five-day span, the county reported 105 new positive cases with 75 of those associated with the university.

“One of the things we saw over the summer and more recently once the fall semester started at the University at Albany, is that large gatherings can easily become disastrous with just a few people carrying the virus,” McCoy said.

In Illinois, McLean County Health Administrator Jessica McKnight said the county saw a 2 to 3 percent positivity rate throughout the summer, but when students returned to Illinois State University in early August, the rolling seven-day positivity rate increased to 11 to 12 percent.

The Illinois State Department of Health offers a mobile testing program available to counties upon request which McKnight said the county asked for to bring increased testing to the university’s campus. The county has also been working closely with the university in regard to contact tracing efforts.

“The need obviously is showing to be a little bit greater than we anticipated with the number of cases that came in at the beginning,” she said of the contact tracing efforts.

McLean County has worked with the university, the town of Normal and the City of Bloomington to institute ordinances related to bars and large gatherings of over 10 within a certain geographical area near the campus.

“My message for students is that they’re members of our community as well, and we look to them to be the future and help us,” McKnight said. “It’s going to take all of us working together to help our community move forward.”