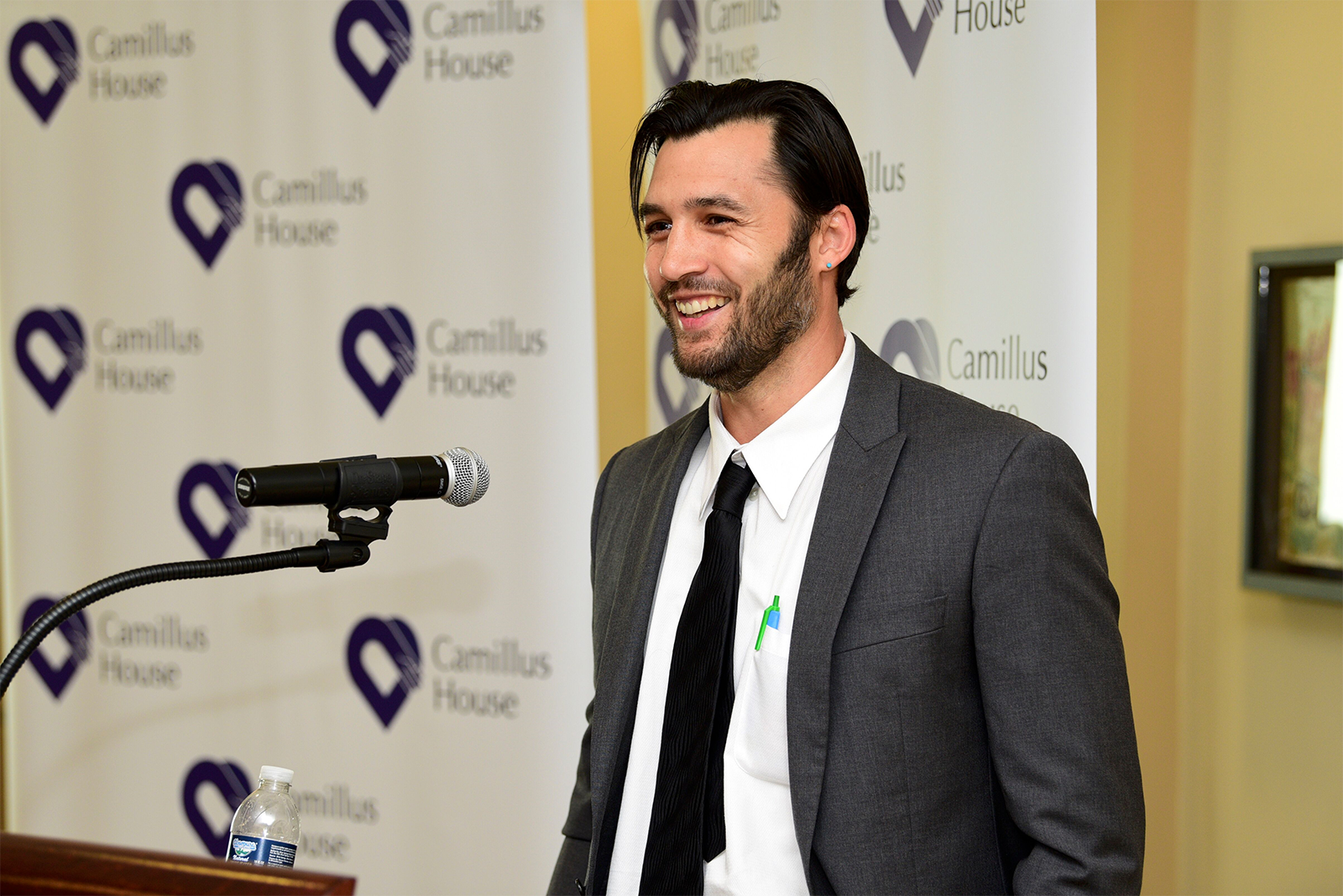 Justin Volpe didn’t know how he was doing.

He was used to a little more noise when he spoke in front of groups, he knew how to handle those little distractions. But at the Florida Association of Counties’ Annual Conference in Orlando in June, he heard only intermittent clinks of silverware.

“I’m not used to that, usually people keep talking,” he said. “I guess they were listening.”

Miami-Dade County Commissioner Sally Heyman called it for what it was.

“They were captivated,” she said. “Nobody got their food and left, everyone stayed. He definitely had their attention.”

What Volpe told the crowd of roughly 300 was a story, his story, that serves as the model for Miami-Dade County’s efforts to divert mentally ill inmates to programs that can help them get better, the underpinning of NACo’s four-year-old Stepping Up Initiative.

Once a mentally ill and drug-addicted restaurant and bar worker, just getting by, Volpe has since become a peer support specialist, having worked for Miami-Dade County for six years in that role before moving to work for an independent contractor.

In 2003, Volpe’s brother prompted him to move to Miami when he was 19, to make a clean break from a difficult home life in New Jersey.

“It was a chance for a fresh start, but the problems just followed me here,” he said. In fact, his problems got worse as he entered his 20s.

“I had unstable relationships with a lot of people in my life, but my mental health problems didn’t start coming out until 2006,” he said.

From 2003-2007, he moved 10 times and held 20 different jobs. He was proud, despite of his addiction and schizophrenia, to always have kept his rent paid. But while he kept that winning streak going, he was losing elsewhere, the combination of methamphetamine use and paranoid delusions trimmed his 6 foot 1 inch body down to 130 pounds; he is 200 pounds now.

“I’d just walk the alleys of Miami Beach at night,” he said.

But his continued drug use wasn’t for lack of effort. He reached out to his family for help, and they went one further and staged an intervention, with his divorced mother and father and his brother all coming together to try to talk sense into him.

“For the most part, people are trying, I know people who’d like to have their own lives under control, but they just can’t do it,” he said. “Given the right tools, people want to do better for themselves.”

He didn’t want to do inpatient care, but he went to rehab, where withdrawal took its toll.

His delusions continued, and he left New Jersey to return to Miami, where he picked up day labor jobs.

“I wasn’t clinging to too much, but I wanted to go back,” he said. “I took the meds, I lived a normal life.”

Then he got bored, overconfident he was under control. He started using again.

“I thought I was better, but at 22 years old you just don’t have the perspective to know,” he said.

In April 2007, he faced a felony theft charge and wound up on the psychiatric care floor of the Miami-Dade County Jail, since shuttered.

“I feared for my life,” Volpe said. “They wouldn’t let me sleep, and I heard people being beaten a few doors down. I heard guys pleading for their lives. I was in a constant state of fear.”

Simply put, if he didn’t have mental and emotional stress before, he certainly did during his confinement.

All the while, over a month and a half, his family was trying to get him released and placed in the county’s Criminal Mental Health Project.

Leifman started and leads the project, which eventually got Volpe out of the county jail, his charge reduced to a misdemeanor and into community-based treatment, plus a stay at a halfway house.

Volpe wasn’t entirely pleased — a psychiatrist told him within a few minutes of meeting him that he would never work or live a functional life.

“I was upset, but I agreed to treatment,” he said. Soon after, treatment ended up being more of a networking opportunity for his addiction.

“I met up with more people to use and absconded from the house to use.”

He found a place to live with a mother of six in the Liberty City neighborhood. One day, she left to buy drugs and never came back, and when a boyfriend came looking for her, Volpe decided to walk 12 miles back to the house. He passed people waiting for the light rail, and he could hear their reactions to how bad he smelled. That was his moment of clarity.

He returned to the halfway house, dutifully underwent treatment, and prepared to figure out what his next move was when he was offered a job as a peer support specialist.

“She said, ‘How would you like to work with severely mentally ill people,’” Volpe said. “I told her, ‘Lady, I’m mentally ill, I have a criminal record.’”

But that actually worked in his favor. It both made him an excellent candidate for the job and the job itself would serve as a deterrent to relapse.

“I had to walk in the doors of the courthouse every day around cops — corrections officers, judges, lawyers,” he said. “I was paranoid to begin with. There’s no way in hell I was going to get high and walk into this building.”

He was the contact person for people in recovery through the Criminal Mental Health Project and helped train law enforcement in crisis intervention. He worked for the county for six years before working in a similar capacity for a nonprofit.

At the nonprofit, he meets people when they’re released from jail, he helps them get their medicine, delivers them to their treatment provider, gets them clothes and takes them to where they’ll be living.

He follows up on a regular basis, takes them to appointments and support groups. He shares his own story, but most importantly, he listens.

“People tell me they feel more comfortable talking to me, they can trust me, because I’ve been where they are,” Volpe said.

“He’s a remarkable employee,” Leifman said. “He’s helped thousands of people get help and stay out of the criminal justice system. The secret sauce of our success is our peer support system.

“There was one man he was taking to McDonald’s and buying him breakfast every day. To them, he was less of a part of the system and more someone they could trust.”

That long walk that led to his moment of clarity became part of his daily life outside, though.

“If you don’t have your own car, you have to take the bus, and the bus doesn’t come all the time. I was averaging eight miles a day walking, so I’d run through a pair of shoes every three months.

“I’d show up when people got out of jail and they’d see how sweaty I was and that I would just be getting on the bus with them.”

While that reality continued to ingratiate him to his clients, Heyman saw a problem that needed some help.

Later, that car was upgraded to a Ford C-Max hybrid. Now he can see 10 clients in a day. All after he left the county’s employ.

“He’s smart, he has a great personality and he’s been through the system,” Leifman said.

“A lot of people look at him, not realizing that he’s been ill, in recovery and been in the criminal justice system. When they see how far he’s come, that helps. He’s aspirational.”

Volpe knows he has excelled, which gives him more empathy for his clients.

“I started at the bottom, and I’ve made it, I have a wife and son and get to work where I can help people, but I know this doesn’t happen a lot, a lot of people fail,” he said.