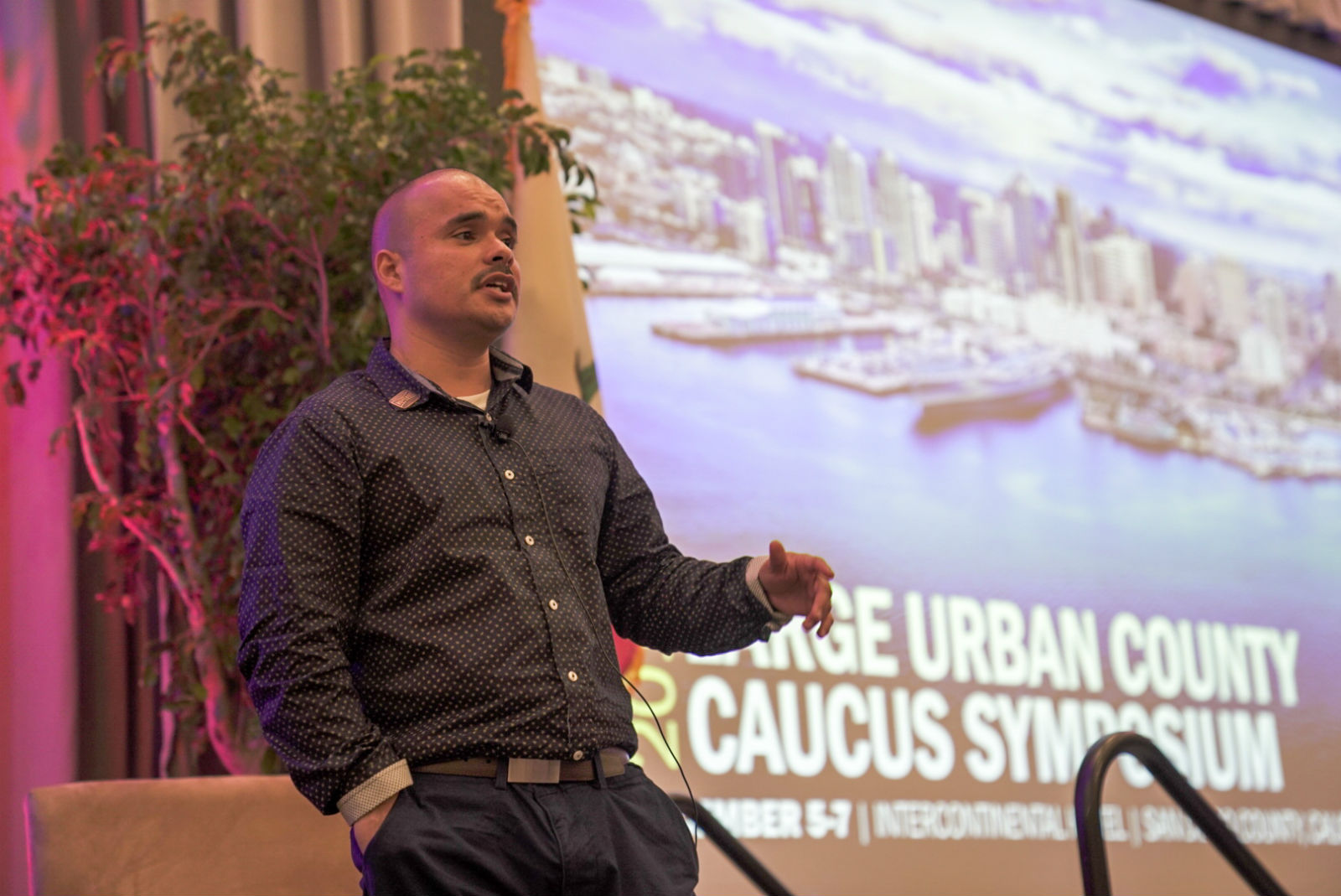 Hugo Gonzalez, an alumnus of Homeboy Industries, talks to LUCC Symposium attendees about his life as a gang member. Photo by Hugh Clarke

In order to filter by the "in queue" property, you need to add the Entityqueue: Queue relationship.
For many young people, joining a gang “is like the family that they don’t have"

For many young people, joining a gang “is like the family that they don’t have,” said Suffolk County, N.Y. Sheriff Errol Toulon, especially if a “father is incarcerated, the mother is working two jobs and they’re being raised with their siblings by their grandparents.”

“They’re losing their way through social media, intimidation and a lack of a home environment,” he said. “These young kids don’t have guidance.”

Toulon was part of a panel discussion, moderated by LUCC Chair Larry Johnson, a commissioner from DeKalb County, Ga., Thursday morning on Curbing Youth Violence Through Connections to Opportunity, which was followed later in the afternoon with a roundtable discussion.

“The good news is, we know what works to stem youth violence, and there’s evidence to back that up,” said panelist Sandra McBrayer, chief executive officer of The Children’s Initiative, based in San Diego. The organization “works to bring ‘the village’ together to raise all children and youth in San Diego County.”

McBrayer said it’s important to not “front end our detention facilities — we are front-ending our prevention and intervention efforts” and not just “lock them up and throw away the key.”

“I’m so grateful for being here,” said Gonzalez, who went to prison at age 16 for more than 18 years. “If I learned anything in prison, is that we forget logical things. What is really happening? Instead of just jobs, and funding, we have disconnected youth.”

“What they’re looking for is love, compassion and assurance,” he said. “The issues are so deep.”

Toulon noted that his jail conducts a psycho-social screening process and that some of his officers are trained as counselors.

McBrayer noted that it’s important to build a relationship with those who are incarcerated and call them by their names. “We have to identify the trauma and work to heal it,” she said.

“We have to look at each other as human beings,” Gonzalez said. “Let’s focus on the root problems. Ask ‘Why?’ It’s only then that we’ll truly understand and find solutions.”