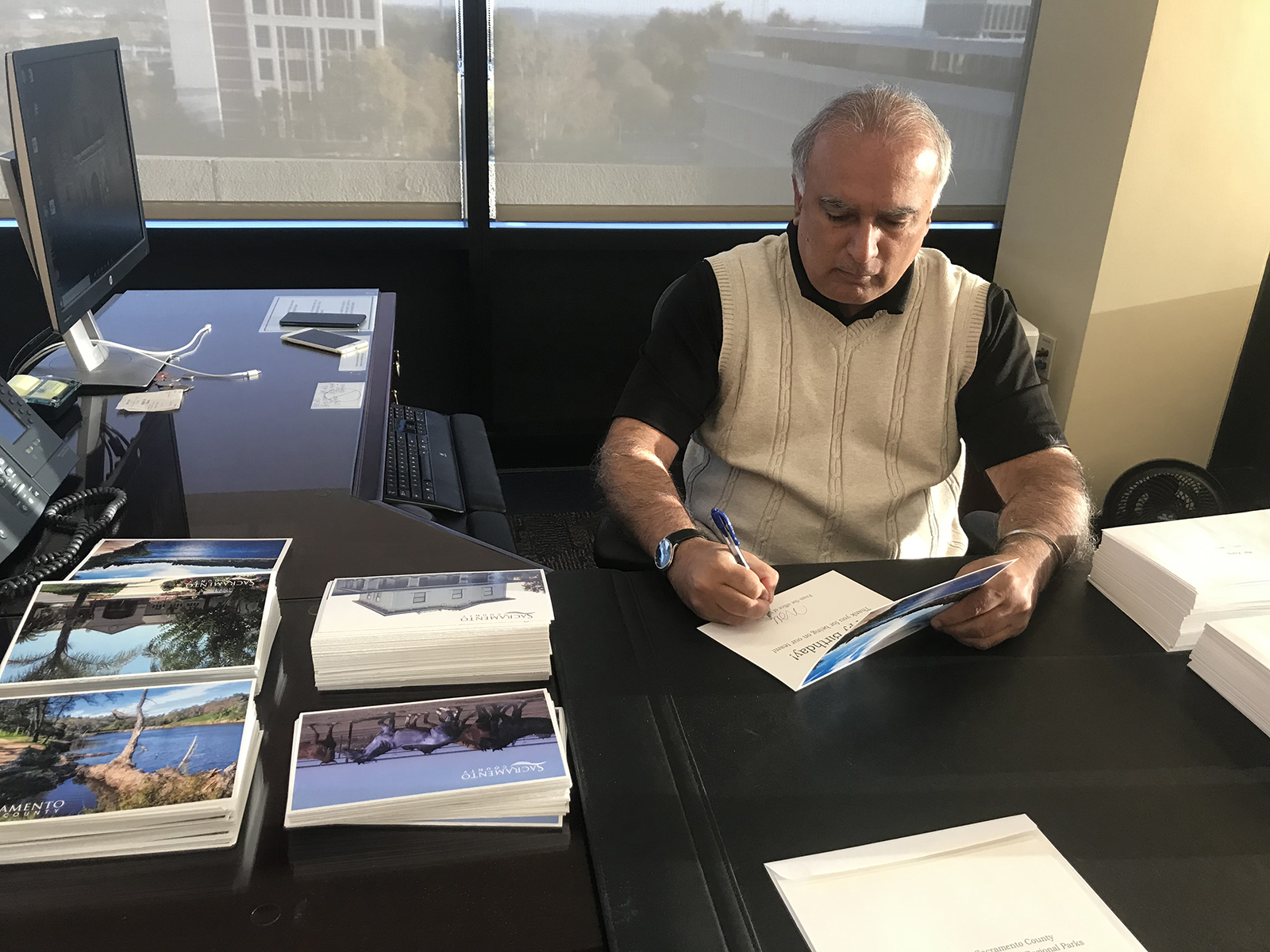 In order to filter by the "in queue" property, you need to add the Entityqueue: Queue relationship.
Every year, each of the 12,500 Sacramento County employees will get a birthday card signed by County Executive Nav Gill - something he swore early in his career that he'd do if he got to a leadership position.

His right wrist and hand have managed to withstand the repetitive motion of signing birthday cards to each of the county’s 12,500 employees, which Gill has been doing each year since 2017.

“This was something I saw the city manager do when I worked in Durham, and it’s really stuck with me,” Gill said. “I knew that when I got to be an executive or manager of some sort, I wanted to do that.”

A year after being appointed county executive, he followed the example of that city manager, Orville Powell, and started writing to each county employee.

The cards, produced and printed by the county, bear photographs of scenes that represent the county’s beauty and variety on the front of the cards, with more information on the back. By rotating the four different photos by season, Gill ensures he has another year to go until employees would be in danger of getting a repeat.

He comes in early on Friday mornings and gets to work, signing roughly 250 cards over an hour and a half.

“Usually I write their name and then sign my name, but if I know them personally, I’ll add a personal message,” Gill said. “For a while, I had managers see me in the office early and stop by to chat, but I let them know I have to focus on this.”

In what is otherwise a hectic and busy schedule, the ritual allows Gill a chance to be present in the task and consider each name he writes by hand. For most of the employees who have, and expect, no daily interaction with Gill, it’s a notice that at least once a year, Gill not only sees their name, but writes it by hand.

The county maintains other employee recognition programs, particularly gifts and awards for years of service, but the birthday cards are different, and personal.

The county’s largest departments include the sheriff’s office, human assistance and health services, and whenever Gill visits those offices, his meetings with rank-and-file employees invariably include someone recognizing his name from the card and showing him that they’ve saved them.

“That’s a real connection that you can make,” Gill said. “I had skeptics who thought it would be tedious, but when they read the emails, it wins them over. I get responses back from people who say nobody else sent them a card and they felt like someone remembered them.”

The cards themselves have also sent a message. One of the cards includes a photo of kite surfers on the Sacramento River delta, and sure enough the card identifies it as being in Sacramento County.

“A lot of times, the delta is so close to the Bay Area that people just assume that’s in another county,” Gill said.

“This is a chance go show off another county asset to our employees and add to some county pride.”

The county communications staff is scouring the county for more photos to include on the cards, because Gill has about a year left to add new cards to the rotation. It’s a ritual he plans to continue, particularly because he hasn’t reached a point where his right hand is on a “pitch county,” nor has he had to put it on ice, either.

“It’s good to be ambidextrous,” he said.