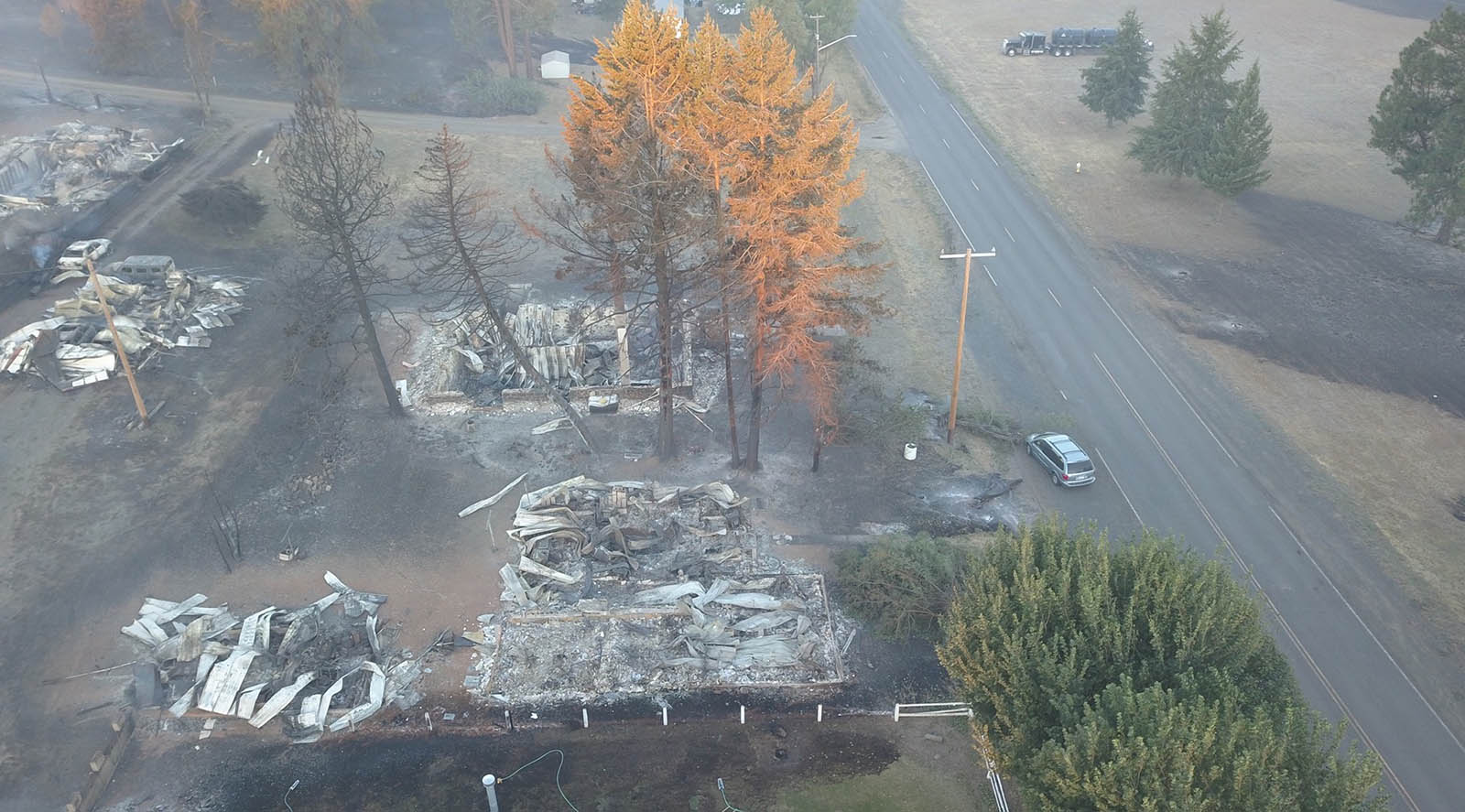 A drone photo shows the damage from the wildfire that destroyed 80 percent of the town of Malden in Whitman County, Wash. Wildfires have destroyed thousands of acres in counties across several Western states. Photo courtesy of the Whitman County Sheriff’s Office

A combination of strong winds and dry conditions created a perfect storm for a trio of wildfires that simultaneously burned in Whitman County, Wash. on Labor Day.

The first fire started in the county seat of Colfax.

“Colfax is in a valley with a steep hillside,” Whitman County Sheriff Brett Myers said. “It was fast enough and big enough that the local fire departments called in for as many volunteers in the county as available to come help.”

Alerts came for a second fire about five miles west of the county seat. The two separate fires required responses from all local fire departments and volunteers.

One hour later, a third fire started north of Whitman County in Spokane County, Wash. This fire, fueled by high winds, headed toward the small town of Malden.

“That fire just took off, so the wind speed and direction basically put that fire on a collision course with the town of Malden,” Myers said.

Malden has a population of around 200 and is surrounded by wooded areas, dry grass and fields used for farming. When the sheriff’s office learned of the severity of the fire, Myers diverted all resources to evacuate the town’s residents.

The rural county is largely staffed by volunteers who were already battling outbreaks in the two other locations in the county when the Malden Fire began to spread.

“With resources tied up in Colfax on two fires because this fire didn’t exist at the time, response times were delayed,” Myers said. “But even had response times not been delayed, this was a big enough fire that had you been there waiting for it, there was very little you could have done.”

The fire destroyed 80 percent of the homes and structures in Malden including the post office, city hall, library and fire station. It reduced many homes to piles of rubble.

“You have this almost monochromatic waste field — is what the feeling is there,” he said.

It remains unclear what started the fires.

“It was the perfect storm,” Myers said. “The truth is rarely do you have this kind of perfect storm and everything was set up for this to be basically a disaster.”

The Whitman County Board of Commissioners issued a countywide emergency declaration following the fires to aid in expediting recovery efforts.

Commission Chair Michael Largent said the immediate impact of the fire was a severe strain on firefighting resources. Now, the county’s efforts will go toward rebuilding.

“The struggle right now is long-term recovery for the communities and we’re still trying to put together,” he said.

Largent and Myers both credited a good working relationship with county agencies and departments as well as neighboring counties that sent resources to help fight the fires in Whitman County.

As Malden works to rebuild, Largent said there are significant challenges that come with cleaning up and disposing of the debris, including the county’s budget which cannot handle the cost of debris disposal.

“We’ll really need help either from the federal government if we get a FEMA declaration or other sources to clean up the area so people can begin again,” he said.

Gov. Jay Inslee (D-Wash.) visited Malden after the fires and said the state is assessing the damage to see if Malden qualifies for federal aid.

“If we don’t have some sort of a broader relief, this community cannot recover because the resources are not there,” Largent said.

There have been no reported fatalities or serious injuries from the fires. Despite all the damage, Myers said the county is lucky because the disaster could have been worse.

“I’d like to think a lot of it was getting there in time, having the resources to get there and people heeding the call and a lot of luck and maybe a little help from the big guy upstairs, too,” Myers said.

The three fires are now contained. The Red Cross provided Malden evacuees with hotel rooms and Whitman County has received donations from across the country as residents return to assess the damage on their homes.

“We have our neighbors and our friends in this small community that are standing by ready to help,” Largent said. “There is hope at the end of this no matter how dire it looks at the moment.”

As this year’s wildfires force people out of their homes who have a potential need for shelter, the counties that are taking care of them are painfully aware that even as the air outside gets increasingly smoky, the air indoors can be even more dangerous. The added element of the COVID-19 pandemic is complicating emergency responses and density is quickly becoming an issue.

For most counties, that has meant partnering with the American Red Cross, which has provided hotel vouchers to evacuees in hopes of keeping families together and apart from other residents, in an attempt to prevent cross-contamination.

“We were fortunate with the timing of our Jones Fire (in early August) because it was one of the first and we weren’t going to tax the Red Cross’ system too much,” Jacobs said. “It’s circulating some money back into the local economy, because we haven’t had too many people staying in our hotels this summer.”

Preparing to take in some of the 3,000 residents from the mandatory evacuation area and another 1,000 leaving their homes voluntarily, the county had plenty of notice from its most vulnerable residents.

“We have a process where people can self-register if they have mobility issues or they can’t self-evacuate and we have been able to reach out and check in and see if they need help,” said Lori Hodges, Larimer County’s director of emergency management. “We’ve had some people say they’re immunocompromised or they’re homebound because of the coronavirus, so that was something that helped us not take them to the evacuation center. We got them directly into housing.”

When Larimer County played host to 800 firefighters during the summer, the county housed them at its fairgrounds, where the Army Corps of Engineers had built an alternative care site for use if local hospitals were overcrowded.

“It was a really good fit, especially at the beginning,” Hodges said. “If we had another major evacuation, we’d know we have that option. We’re also planning that if we need to, we can operate congregate sheltering in a way to prevent too much cross-contamination among groups.”

Uncertainty reigns, when a single lightning strike in a dried forest can set off a fire that could grow to thousands of acres.

“We want to let people know that we have a plan and we still can support them in this environment, so they don’t have the fear of going to a shelter and not knowing what the outcome is going to be,” Hodges said.

Nevada County’s Jones Fire evacuation order came early in the day, and the timing allowed most evacuees to avoid having to stay overnight in shelters. The county turned instead to temporary evacuation points — well-advertised locations where county staff could triage the situation and help residents figure out what to do next.

It’s also an opportunity to check in and establish understanding of the pandemic.

“We have public health specialists at the evacuation center to check on people to make sure they don’t have symptoms and they have information about COVID and how it spreads,” Hodges said.

And some counties with a significant homeless population are planning for their needs too. Clackamas County, Ore. has provided two indoor locations where people without housing could seek shelter from the smoke.

Whether or not residents have to be evacuated, first responders are also part of the equation.

“We are also ensuring the people responding to the wildfires remain safe and limit their exposure to COVID-19,” said Dylan Blaylock, spokesman for the Clackamas County, Ore. Board of Commissioners. “First responders are expected to check their symptoms every day before reporting to duty. If they have COVID-19 symptoms, they cannot report to duty and need to contact their medical provider. We are ensuring physical distancing during any briefings or unavoidable group work.

“We also provide masks, hand sanitizers and other personal protective equipment,” he noted. “As much as possible, first responders are working staggered shifts to limit exposure.”

Fortunate to get through its wildfire without too much need for shelter, Jacobs said Nevada County is refining its strategies in case another fire drives up demand for shelter.

Beyond that, Hodges is hoping to replenish resources for evacuees.

“If people can donate, we ask them to donate to the Red Cross because they’re putting up a lot of money for it,” she said.