County clerks ‘pull back the curtain’ on elections 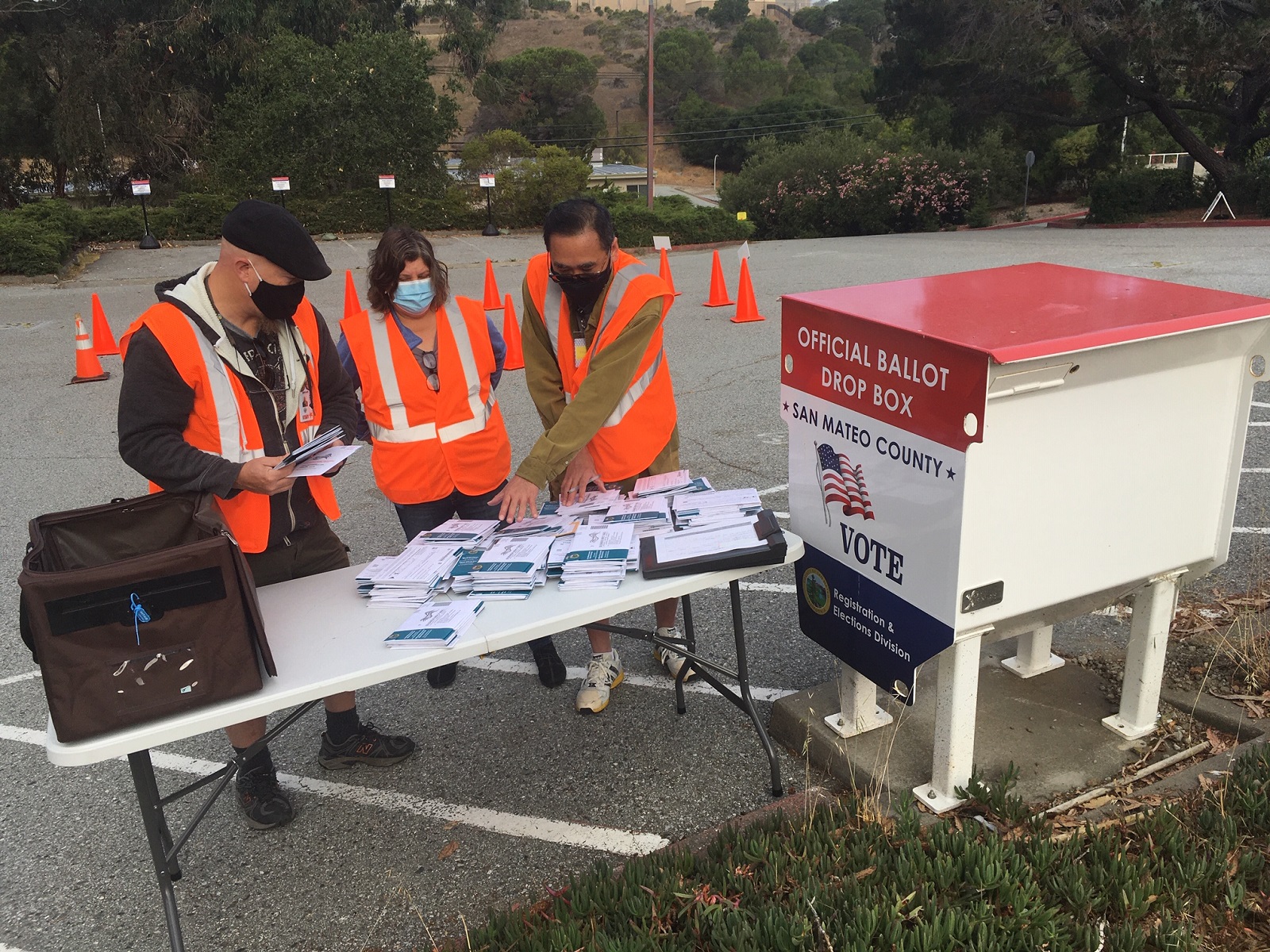 Elections staff in San Mateo County, Calif. stand next to an official ballot drop box. The ballots are regularly collected by staff with two-person integrity and custody logs rechecked at each stage of the process. Photo courtesy of San Mateo County Office of the Assessor-County Clerk-Recorder and Chief Elections Officer

After receiving an unprecedented level of interest and scrutiny in elections and election administration following the 2020 presidential election, Utah County, Utah, Clerk Josh Daniels decided to open his doors.

Daniels hosted a first-of-its-kind event in the county: An election open house.

The event allowed the public to see what goes into running an election and find out about the technical details behind election administration.

“It became clear that in order to improve public faith and confidence in the election system, we needed to become more transparent and more proactive in communicating to the public,” Daniels said.

Daniels brought out samples of equipment and mixed the night with hands-on demonstrations, a question-and-answer portion and a presentation on the steps that go into running an election for the event’s 40 participants.

The event helped inform the public about the security of elections, he said.

“If we’re going to be effective public servants, we need the trust and faith of the public,” he said.

According to Daniels, his office is planning on holding similar online events in a webinar format in the future.

“Just given the degree of scrutiny in the wake of the 2020 election, it’s really important that we get ahead of it and be proactive, ‘open up’ so to speak and give the public a peek into what we do,” he said.

Francisco Diaz, the assistant county clerk-recorder in San Benito County, Calif., said the county has also seen an increase in the number of people who have voiced concerns about how the election process works.

“I think more than anything it is about trying to understand how the entire process works, from the beginning to end and that’s part of the outreach efforts I’m working on,” he said.

Diaz said his office has increased their outreach efforts since March 2020.

The office performs social media outreach and live broadcasts the arrival of ballots, the counting of ballots, running ballots through machines and troubleshooting any errors, he said.

“I think people are appreciative of the fact that they can see what’s going on, who’s working in the elections office,” he said.

He also holds presentations that walk residents through the entire elections facility and shows off the room where ballots are located. The groups can range from one person to 60.

Diaz said he thinks the tours take away the mystery behind the election process.

“We highly encourage those individuals who come into our facilities to become volunteers for the next election and some of them have taken us up on that offer,” he said.

The committees’ goals are to increase voter participation and engagement, Irizarry said.

Irizarry, who is also the assistant assessor-county clerk-recorder, said the county was the first in the state to conduct all mail ballot vote-center elections as a pilot project in 2015.

This led to the passage of the California Voters Choice Act of 2018 that establishes a new election model and requires counties that opt into it to establish a voter education and outreach component.

“Everyone is invited to the table,” he said.

Irizarry said he has seen an increased interest in voting integrity and transparency during the last election by elections integrity projects and other groups ensuring the electoral process is transparent.

“But that’s in our DNA, way before the heightened interest that’s here now,” he said.

He described how the county has had an “open-door” policy and encourages residents to observe the elections process to walk through different units and stations to see the vote by mail, signature verification and adjudication process.

“The foundation of elections is trust and transparency and of course professionalism and applying the very best technologies and the very best people to ensuring that you have an open and fair, honest, transparent and of utmost importance, an accurate process,” he added.