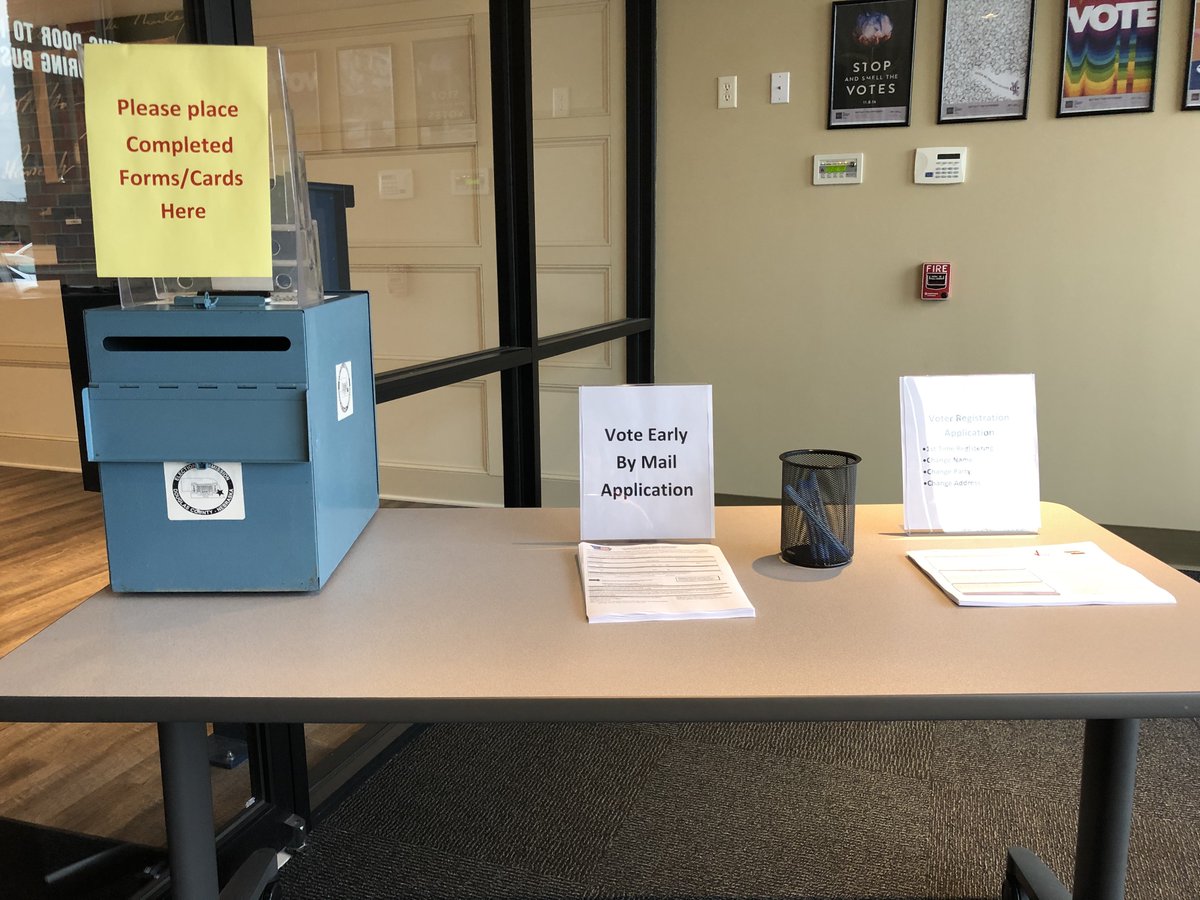 In Douglas County, Neb., a self-service station in the lobby of the elections commission office allows voters to complete early voting applications and drop off forms in a secure box without coming into contact with any county employees.

Administering an election during a global pandemic is likely a first for most county officials.

With the uncertainty of COVID-19’s long-term impact throughout the country, counties are grappling with election-related challenges ranging from shortages of poll workers to providing additional voting options and keeping polling locations clean.

Georgia, Kentucky, Louisiana, Maryland, Connecticut and Indiana have already rescheduled their primaries because of the coronavirus pandemic, according to The New York Times.

On Tuesday, March 17, despite the COVID-19 outbreak, four states were set to hold elections. Voters in Arizona, Illinois and Florida cast their ballots, but officials in Ohio made the last-minute decision to postpone the election until June 2.

In Shelby County, Ill., County Clerk and Recorder Jessica Fox said all locations on Election Day had signage posted suggesting curbside voting, especially for those who were sick.

The county was short on election judges in some precincts, she said, but all of the polling locations remained opened as originally scheduled.

“We were able to cover the majority of the vacancies that we had come about,” Fox said. “We had a positive experience here all things considered.”

“We had low turnout, but we had every polling place open and opened on time,” he said.

Tirio said close to 100 poll workers called out sick leading up to the election, but resources were moved around to keep locations open.

“We had the remaining judges who really just saw this as a nearly military-type commitment to their community and they were going to be out to make sure that the vote happened,” he said.

A week before the election, Tirio said he discussed moving polling locations that were based in senior communities to ensure the safety of high-risk individuals. He suggested other counties do the same to ensure communities that house those who are more susceptible to catching the virus stay safe.

Prior to holding any election during the coronavirus pandemic, the Centers for Disease Control (CDC) recommends election officials encourage voters to use voting methods that minimize direct contact with others and reduce crowd size by using such methods as mail-in voting, early voting and drive-up voting.

Additionally, poll workers should ensure bathrooms are supplied with soap, water and drying materials and provide alcohol-based hand sanitizer to use before and after touching a voting machine, according to the CDC. Election officials should utilize social distancing strategies by increasing the distance between voting booths and reminding voters to leave space between themselves and others.

Douglas County, Neb. Election Commissioner Brian Kruse is taking these precautions ahead of Nebraska’s May 12 primaries.

Kruse said the elections office is still open to serve the public, but the election commission established a self-service station in the lobby vestibule before entering the office. The county has early voting applications for voter registration and a secure box where voters can drop off forms and other items. The office also established a drive-up drop box in the parking lot.

“So far, it’s been working quite well,” he said.

Kruse said they are encouraging early voting and will be sending out early voting request postcards to all voters in the county — which is not typically done for primary elections. Voters who sign and return the postcard will get a ballot by mail.

In Nebraska, state law requires voters to request a ballot. In a county the size of Douglas County, voters cannot automatically mail ballots or have a by-mail election, according to Kruse. As of March 20, Douglas County had twice as many early voting requests than in the 2016 and 2018 statewide primaries, he said.

“We have an early vote request list and so we try to utilize that, but in these extraordinary times, voters who are not on that list will now get this postcard,” he said.

Kruse said currently, the biggest challenge he is facing is the unknown with poll worker shortages and changing of polling locations. The county has moved away from in-person training for poll workers with all poll workers completing training online.

“We have faith. Our poll workers and polling places have been excellent community partners through all the years and we’re hoping that they will come through again,” he said.

If necessary, Kruse said they may have to utilize smaller staffs at some of the county’s 222 polling locations and 237 precincts.

“Our preference in Douglas County would be five [poll workers],” Kruse said. “The good news is we have about two months before the elections, so we’re brainstorming on possible other ways to attract poll workers.”

The question remains if the coronavirus pandemic will affect voter turnout in Douglas County.

“It could be lower because of the pandemic, but on the other hand it could be higher because there’s so much awareness about a by-mail election and sending voters an early voting request card and all of the media and social media,” he said.

Kruse said anyone in Nebraska is able to request an absentee ballot to vote.

“We would just highly, highly encourage everyone to consider voting that way,” he said.