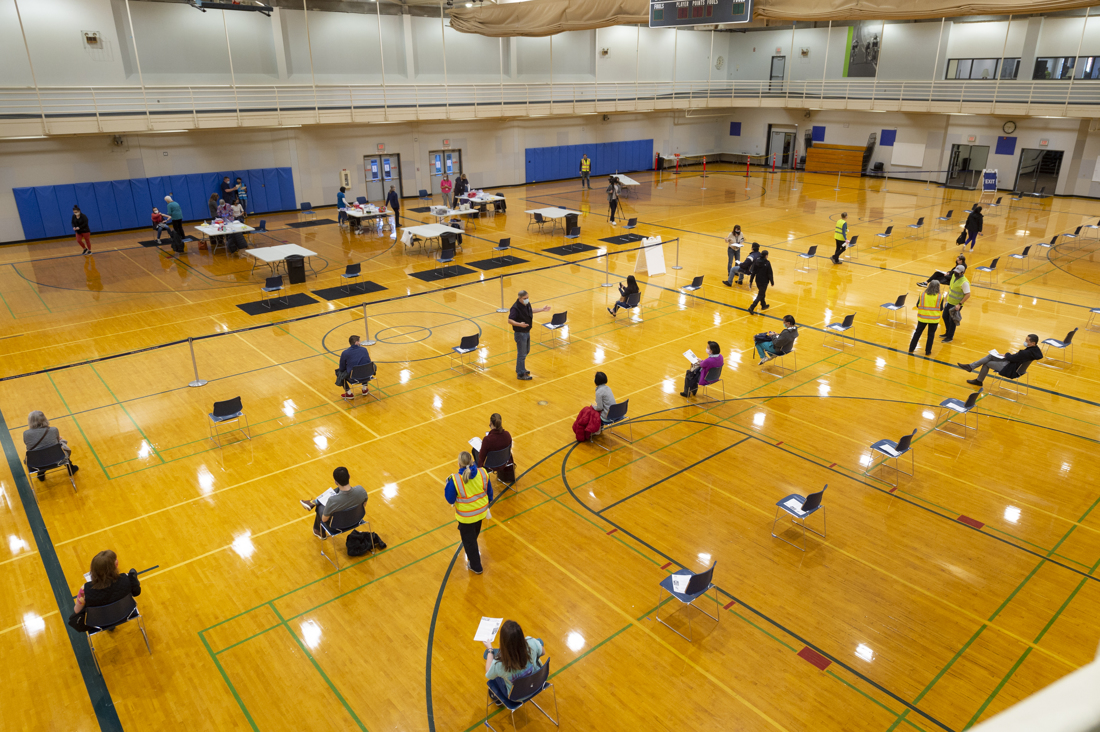 The Snohomish County, Wash. Vaccination Task Force launched the Everett Activity Center mass vaccination site in partnership with Boeing. The site has the capability to administer 10,000 vaccines per week. Photo by Marian Lockhart/Boeing

In order to filter by the "in queue" property, you need to add the Entityqueue: Queue relationship.
From Disneyland in Orange County, Calif., to Six Flags in Prince George’s County, Md., and even to the Texas Motor Speedway in Denton County, Texas, mass vaccination sites are popping up across the country.

From Disneyland in Orange County, Calif., to Six Flags in Prince George’s County, Md., and even to the Texas Motor Speedway in Denton County, Texas, mass vaccination sites are popping up across the country for vaccinating large numbers of people as more doses become available.

Gwinnett County Chairwoman Nicole Hendrickson said Gwinnett’s health department, which is a state agency, approached the county about finding a potential location for a mass vaccination site. The health department was administering vaccines at its building, which did not offer enough space for social distancing or monitoring patients.

While the county had already purchased the mall, the former Sears anchor store was not part of the purchase. Hendrickson said they got a deal from the property owner to purchase the building for the vaccination site.

“We really felt like we were making a difference here in leveraging all of our resources that were available to us, in addition to CARES Act dollars, that we’ve invested in getting this site up and running from start to finish,” Hendrickson said.

In a short three weeks, the county collaborated with its planning and development team and fire departments to set up the site, which can administer doses to 3,000 people per day. As of Feb. 11, more than 5,200 vaccines had been administered.

“It really was a team effort with a lot of our county staff just stepping up to the plate to plan and manage that site just to make sure that it was ready to open,” Hendrickson said.

The plan is for the site to be a one-stop shop offering both vaccines and testing as well as a drive-through for vaccinations.

Hendrickson said she also anticipates non-county residents from throughout the metro area traveling to the site.

“We want as many people who are eligible to be able to receive the vaccine,” she said.

The county partnered with its bi-county health district and a local incident management team that typically responds to natural disasters such as wildfires and floods.

Rasmussen, whose role is to coordinate the site, worked with various contractors to obtain resources needed to get it running.

The site opened on Jan. 25 and has administered 9,000 doses in its first two weeks. Rasmussen said it can process 200 to 300 cars per hour if needed, but they are facing the same challenges as many other counties across the country and do not have enough vaccines to administer.

Individuals can call or make an appointment online.

“Especially in the group that we’re vaccinating now here in Washington, which is the over 65 and people with underlying health conditions, they seem to be much more comfortable driving up and getting a shot without having to get out of their car,” he said.

Rasmussen credits the collaboration with local fire departments to successfully establishing the site.

“The biggest thing was engaging those people early and getting their help and building a really good team that was willing to work together,” he said.

In the first few days, the site vaccinated 1,800 people from Snohomish County and has the capability to administer 10,000 shots per week.

“It’s just a great site for getting lots of people through at one time,” said Chris Spitter, Snohomish Health District health officer.

In Texas, the Department of State Health Services selected Washington County to be a rural regional vaccination sub hub for COVID-19 vaccines.

Washington County Commissioner Joy Fuchs said city and county departments selected the county’s Expo Center and Fairgrounds as the vaccination site where over 11,600 individuals have been vaccinated in a four-week period.

As a regional sub hub, the site has also provided vaccines to individuals from over 54 counties throughout Texas.

“This has been great for our county as well as other counties in Texas,” Fuchs said.

“I see this regional sub hub as a success as we fight the COVID-19 virus.”