Counties grapple with symbols of the Confederacy 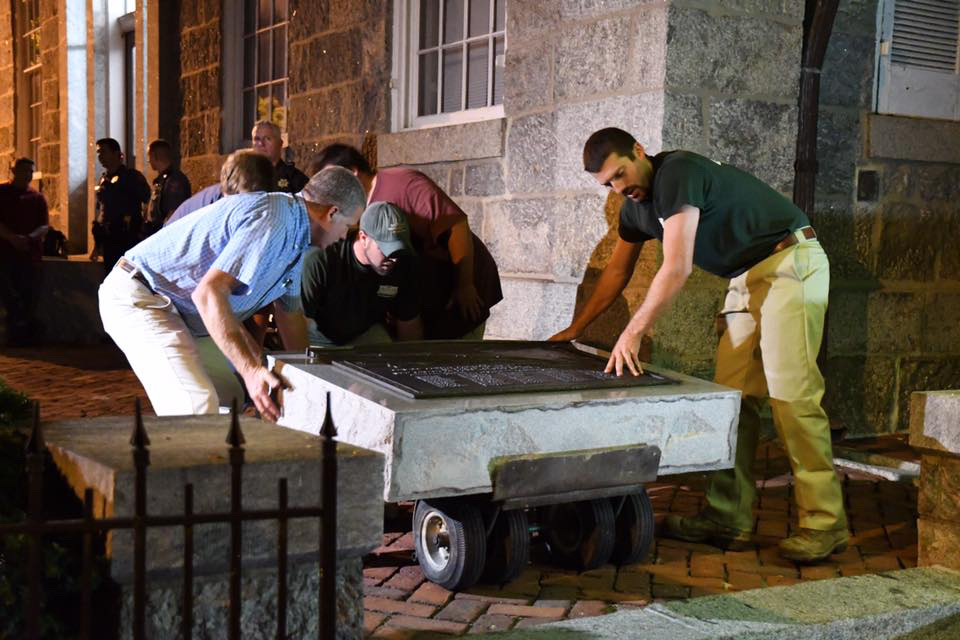 A Confederate memorial is removed Aug. 21 from the grounds of the Howard County, Md. Circuit Court Building. Photo courtesy of Howard County

After the violence in August in Charlottesville, Va., where one person died during white supremacist rallies protesting the city’s plan to remove a statue of Confederate Gen. Robert E. Lee, counties around the country are coming face to face with what to do about symbols of the Confederacy in their own hometowns.

There are more than 1,500 such monuments in public spaces, according to the Southern Poverty Law Center. In all, there are 718 monuments and statues, mostly in the South but scattered across 31 states, as well as 109 public schools named for Confederate war heroes.

In some states, county officials do not have any say over what happens to war memorials due to state laws designed to preserve them. In some states, they do.

In Loudoun County, Va., a motion to ask the General Assembly to give local government authority over war memorials was met with a tie vote Sept. 20, with one member abstaining. Twenty residents spoke out on the issue in a meeting that went on past midnight. Some residents are calling for the removal of a statue of a Confederate soldier that stands on the county courthouse grounds there, while others say it should stay. The statue was spray-painted with graffiti Aug. 17.

“I think it should be up to the locality to decide,” said Phyllis Randall, chair of the Loudoun County Board of Supervisors, who introduced the measure that was voted down.

If given local authority, “I’d hope to have an open community dialogue,” she said. “And at the end of that process, then we could decide.”

As for a suggestion by a fellow supervisor that other statues be added to the lawn? That would be up to residents to decide, she said. But Randall, the first African American elected to the Loudoun County Board of Supervisors, said she “personally” would find it offensive to have a statue of a slave next to the statue of a Confederate soldier.

For now, Randall said there is talk among state lawmakers that an amendment will be introduced to give local control to counties. But after the supervisors’ tie vote Sept. 20, it won’t be on the Loudoun County legislative agenda.

In other states, including West Virginia and Maryland, local government has greater discretion over its war monuments.

In West Virginia, Jefferson County commissioners voted unanimously Sept. 7 to keep a bronze plaque installed near the entrance of the county courthouse honoring Confederate soldiers of the county who served in the War Between the States. The commissioners heard from about a dozen residents — who spoke both pro and con on the issue — before voting.

“More history needs to be told,” Commissioner Patsy Noland said, according to the Herald-Mail Media. “The people coming after us have to learn what we learned. If we forget what happens, history will repeat itself.”

In Maryland, Howard County Executive Alan Kittleman took a different route. He filed a request Aug. 16, four days after the violence in Charlottesville, with the Howard County Historic Preservation Commission to remove a small Confederate memorial that sat on the county courthouse grounds.

Kittleman had discussed the issue frequently with Councilman Jon Weinstein. The two had talked about moving the memorial to a local history museum, which they believed to be a more appropriate spot for it.

“Certainly, Charlottesville expedited things,” Kittleman said. After the violence there, the county heard again from residents who wanted the memorial taken down immediately, “but we explained there was a process. We certainly had people who didn’t want us to take it down as well.”

But “leadership requires you to do what you think is right,” Kittleman said. After a required five-day waiting period from the time the request was made, the county moved the memorial on the evening of Aug. 21.

Why move it at night?  “During the day, we have a courthouse to run,” Kittleman said. “Also, you don’t want to cause a conflict, so for public safety, it made sense.” The cost to move the small monument “about 50 feet” to the museum was “very minor.”

“It actually made great sense to be a part of a museum exhibit,” he said. “It was good for our community, preserves our history and we didn’t want anyone to feel uncomfortable [about the memorial being on government grounds].”

He posted an explanation for the move, as well as videos and photos of the move, on his Facebook page; the two posts received hundreds of comments, both pro and con.

Kittleman’s advice to other county officials facing a similar dilemma: “Consider how it affects your community. Don’t be defensive about what you feel is right. Be honest and stand up for what you believe in.”

Nearly 100 residents came to a three-hour town hall meeting about the Confederate memorials issue Sept. 25 in Newton County, Ga., where a 101-year old Confederate statue stands in the town square. The Q&A with the Newton County Board of Commissioners was a chance for people on both sides of the issue to air their opinions. The county, located less than an hour east of Atlanta, has a population of more than 100,000.

Newton County Commissioner Nancy Schulz said they had plenty of security on hand, including undercover police, as there were threats of violence posted online before the meeting. As people entered, they were asked if they planned to ask a question and if so, they were given a number.

“The way he [Board Chair Marcello Banes] set the stage for the meeting was important,” Schulz said. “You direct how it goes, it can’t just be a free for all.” The meeting featured a historian who was there to discuss the county’s Confederate statue and answer questions.

“The fact that she was from Alabama gave her some credibility to those hard-liners from the Deep South,” said Schulz. The historian advised that the statue needed to be preserved in a way that was mutually agreed upon by all residents. “There weren’t too many groans,” Schulz said.

There was time after the historian spoke for people to ask questions. The audience was told there would be “no booing, or they’d be escorted out.” If anyone “stood up to give a soliloquy or rambled,” Banes steered them back to the topic at hand and asked them if they had a question. “The chairman was very gracious,” Schulz said.

“It became an educational experience for all of us,” she said. “The tone was set by the chairman. He was committed to people staying on point and did not allow division. It turned out to be a great meeting.”

Georgia Gov. Nathan Deal (R) has said he expects a pretty “in depth look into whether or not we should continue to restrict local jurisdictions — counties and cities — in terms of what they may want to consider in their areas,” he told the Atlanta Journal-Constitution newspaper. “It’s an issue I’m sure is going to be before the General Assembly in January.”

Schulz said Newton’s county attorney has interpreted the law to mean that a county can move a monument but it must be preserved. “Those that don’t want to make the decision can say it’s in the state’s hands,” Schulz said.

The next step for the county would be to answer questions about what to do with the statue, she said: If left where it is, should signs be added for context? If the decision is to move the statue where would the county get the estimated $100,000 to move it? Or would the City of Covington take it into its Confederate cemetery?

In South Carolina, the state South Carolina Heritage Act protects Confederate monuments unless the General Assembly takes action. The County Council in Union County, S.C., recently heard from a resident who requested that a Confederate monument on the county courthouse grounds be removed. County supervisors offered to put the constituent in touch with state lawmakers who represent the county.

At the South Carolina Association of Counties, members have been largely silent on the political hot-button issue when it comes to contacting the association about it, said Anna Berger, director of research and training. Over the past six weeks, she said she has seen four to five news stories involving counties and Confederate monuments there.

Although there is no mention of Confederate monuments, state law in North Carolina forbids local action on “objects of remembrance on public property.” State Sen. Terry Van Duyn (D-Buncombe), has said she plans to introduce legislation giving control over relocation or removal of monuments on local public property to local governments.

In Shelby County, Tenn., which has a majority minority population of 54 percent black Americans, “we’re seeing a real coming together along racial and political lines on this,” said Shelby County Mayor Mark Luttrell.

Like Virginia, Tennessee counties don’t have the authority to decide the fate of war memorials. In Shelby County, two Confederate statues within Memphis’ city limits are being scrutinized.

The resolution and meetings with the faith community held before the vote on the resolution brought the community together, Luttrell said. But the actions taken by the county and the city are more symbolic because of state law passed two years ago.

“That to me is the frustrating part,” Luttrell said. “Why shouldn’t Shelby countians be able to make a decision about monuments in their park? Why should we have to get permission to move them? These are decisions that should be made at the local level.”

But even without that authority, coming together to talk out the issue has its rewards, Luttrell said.

“We’re seeing a bipartisan and biracial coalition around this,” he noted. “And we haven’t had any violence; we’ve had some protests. I take great pride in that. You can work through these tough, sensitive issues.”