Counties give voice to their stories via podcasts 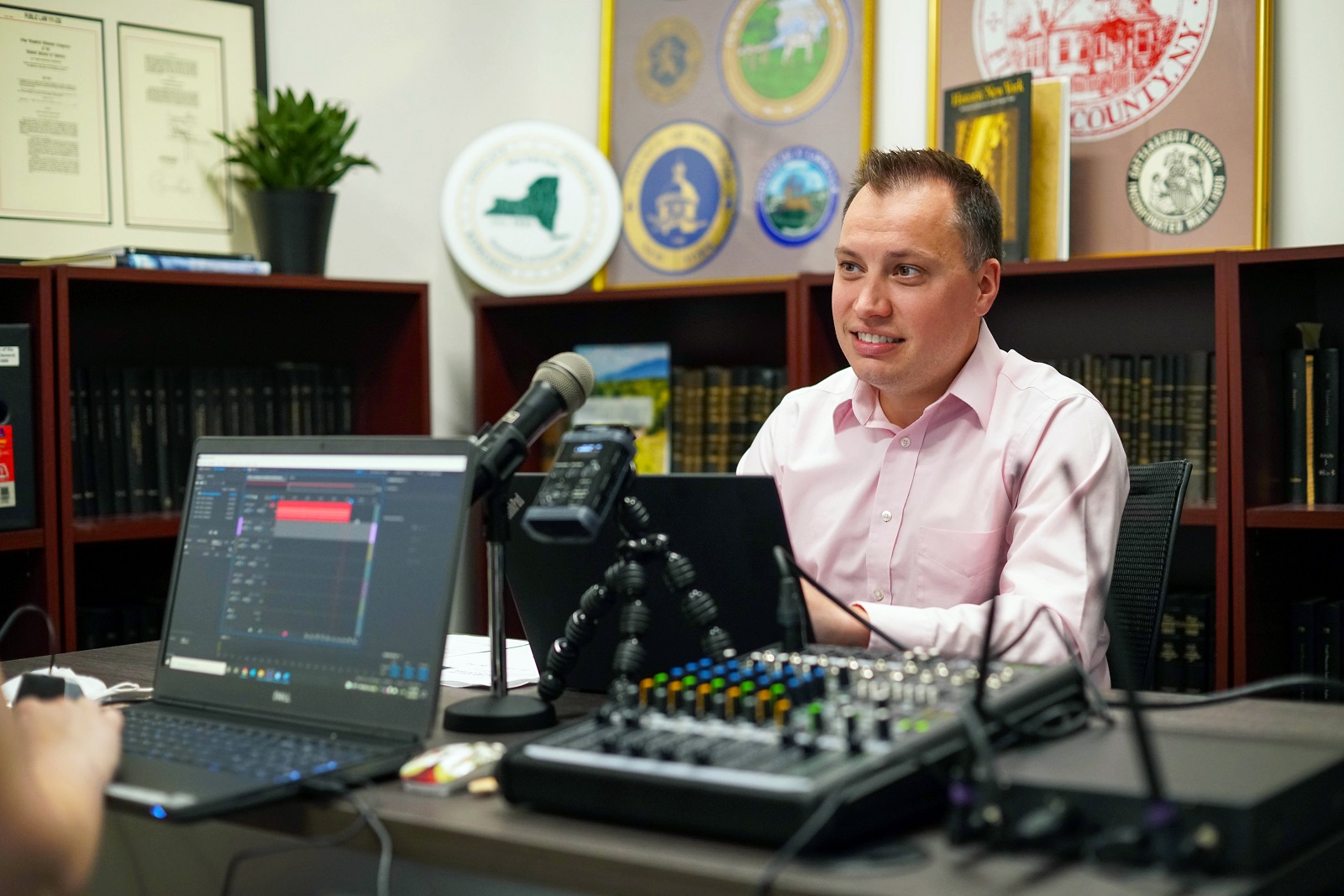 Podcasts have an ardent following — with an estimated 80 million people across the country tuning into them weekly — and are affordable to produce, making them a growing asset for county governments and associations looking to keep their constituents updated and broaden their audience.

If you’re not quite sure what a podcast is, it’s like a radio show, told in a series and streamed online. People don’t have to tune in live; they can listen to them whenever they have time.

In the past five years, podcast consumption has nearly doubled. Early to the craze, Fairfax County, Va. launched its program in 2007 and has since created eight county-focused podcasts, ranging from “Scam Slam,” which warns residents of current scams circulating the community, to “EnviroPod,” a show the county’s public works and environmental services department runs. The episodes include “Alternative Uses for Holiday Waste” and the “Coming Cicada Invasion.”

“Podcasting for the past several years has been just on fire and it’s a great way to get information out to the residents, because it’s free or very minimal cost to get into it,” said Jim Person, Fairfax County’s emergency information officer.

Renee Dallman, the host of Virginia’s “This Week in James City County,” echoed the affordability of creating a podcast, saying that all she needed to launch the show was a microphone, a computer and a Pro SoundCloud account for listeners to stream episodes, which costs the county $144 a year.

“Our local media have a lot that’s being asked of them right now, so this is an opportunity for us to get that information out there straight from the county’s voice,” Dallman said. “We really moved into social media around 2016, but because they have all become more monetized, the information that we’re putting out isn’t necessarily reaching everybody that we want it to reach, so the podcast is something that we have control over, and we can guarantee that that message is going to get to whatever eyes or ears want to hear it.”

Person runs Fairfax County’s podcast program and is the host for “The County Conversation,” in which he discusses different programs, services and happenings in Fairfax County with county employees and subject matter experts. At the time it was launched, the county only had scripted podcasts, so Person created “The County Conversation” to help fill what he considered a gap.

“It wasn’t just having the ability to provide a timely update about a program or service or whatever, but I really wanted that podcast to humanize county government and give people a chance to get to know the person behind the program,” Person said.

Person said he’s found people are much more willing to be a guest on the show because he focuses on having a more casual conversation style and doesn’t release a video form of the podcast.

“It’s much easier to get people to talk on the podcast because there’s not a TV camera there,” he said. “When you’re trying to line up guests, they’ll go, ‘Oh, there’s a TV,’ and I’m like, ‘No, we’re audio only,’ and that’s always an easy sell to get people to come talk. That’s what I’ve built the county conversation podcast as — it’s not an interview show, it’s just a conversation.”

Kate Pierce, the New York State Association of Counties’ multimedia specialist, said the structure of a podcast makes it easier to speak to a wide variety of people. Being a state association, creating a podcast allowed NYSAC to highlight its legislative advocacy and interesting initiatives at the county level while still being convenient for the county officials who are featured, she noted.

“County officials are so busy, so it’s hard to sit down and watch an hour-long webinar on a specific topic,” she said. “NYSAC has a lot of educational webinars, and that’s a big-time commitment and it’s also difficult to travel across the state for different workshops. Podcasts are an engaging format and you can be working on something else in your office or on your commute.

“It’s a really flexible and dynamic medium of accessing information and they’re just available on demand, so you don’t have to wait for a specific live event — you have it pinged up ahead of time, and you can listen to the topics that interest you and skip the ones that don’t.”

NYSAC’s “County Conversations” podcast addresses local and regional issues as well as the impact of national issues at the county and state level.

“Our mission at NYSAC is to foster excellence in county government and unite the voice of New York county leaders, so our guests really represent that range of voices that come from the public and private sector, from the state and federal level,” Pierce said. “…for example, one of our most recent episodes, we talked with the head of fraud prevention at KeyBank, and she’s based in Georgia with a bit of a nationwide focus, but the content of the conversation was tailored to local county officials.

“We can cast that wide net of a topic of nationwide concern, or certain topics in the legislative process that are similar across different state associations.”

Podcasts have created a platform to share information to even wider audiences than intended and keep counties informed on successful initiatives across the country, Pierce said. The Maryland Association of Counties’ podcast, “Conduit Street,” has cross-published NYSAC episodes, including its interview with three+one CEO Joseph Rulison on the 2022 economic forecast, and has also featured NYSAC Executive Director Stephen Acquario as a guest.

NYSAC is always open to collaborating with other state associations on the podcast, Pierce noted. “County Conversations” launched in 2018, but wasn’t streamed on a regular schedule until the pandemic, when the association started to release episodes weekly, Pierce said.

Fairfax County’s “The County Conversation” is released bi-weekly, but Person’s advice to any counties looking to launch a podcast is to upload as often as possible.

“Consistency is key,” Person said. “I think if you really want to get any traction and have any real value to it and make it a valuable asset for the community, you need to do it at least every other week — if I were starting over again, I would go for weekly.”

The podcast has been a great resource for James City County and she thinks any county that is considering creating one should not be daunted by the process. “We’re really filling a void — there’s nobody else that’s talking about James City County news on a radio or podcast show, so it was just starting it, stepping off the curb, giving it a shot and getting feedback from our listeners and adjusting as we go along,” Dallman said.

“That would be my biggest tip for counties — to not hesitate for too long if it’s something that you’re interested in.”