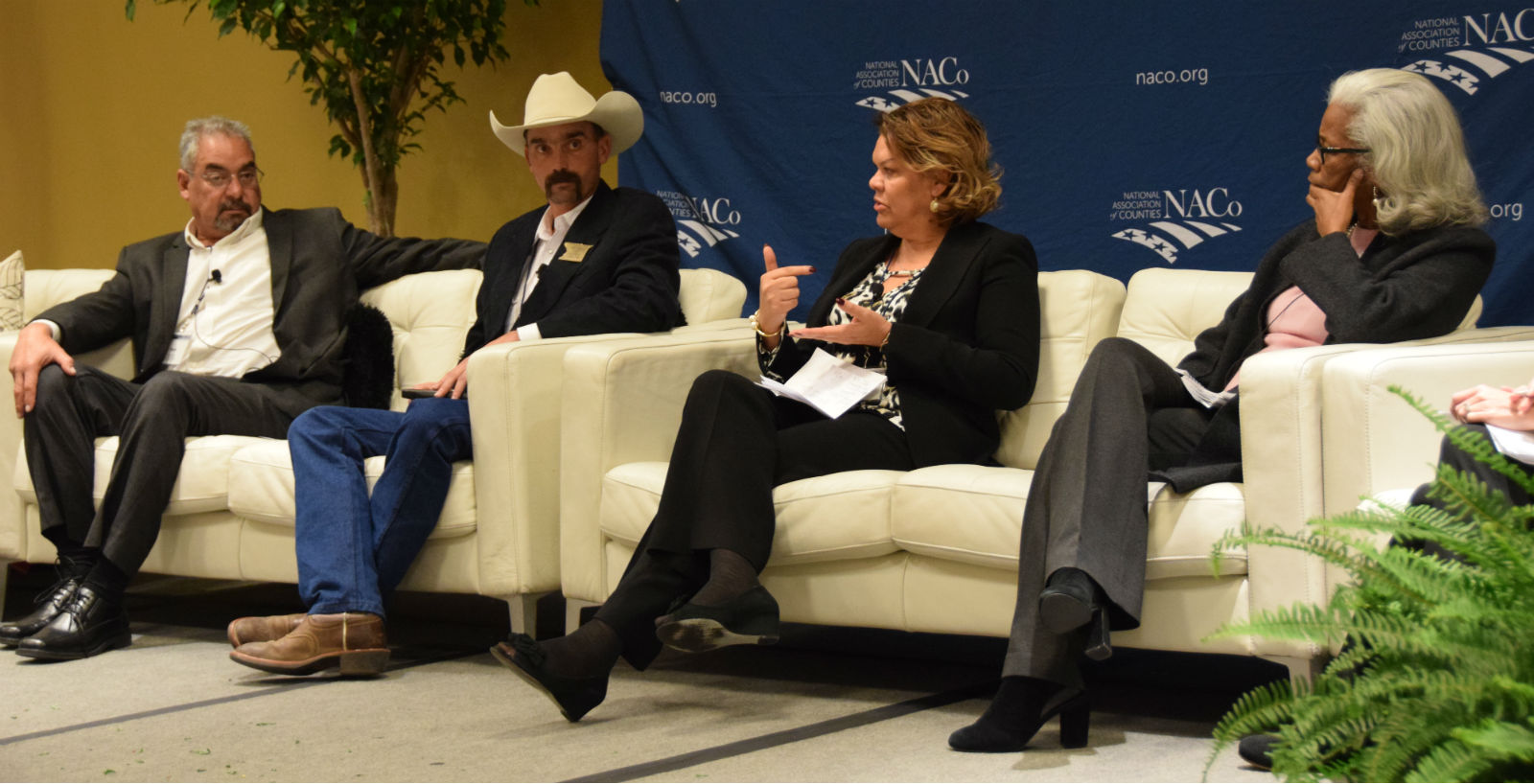 NACo's Poverty Summit in Tarrant County showcase the role counties play in combating intergenerational poverty, with a focus on children ages 0 to 3

Caroline Ratcliffe from the Urban Institute put these numbers on the table when she opened a morning panel discussion on urban versus rural poverty, one of several in a full day of panel discussions on poverty and its impact on children and generations at the 2017 Poverty Summit, Dec. 7-8, in Ft. Worth, Tarrant County, Texas, home base for NACo President Roy Charles Brooks.

The Summit is a high profile event intended to showcase the role counties now play in combatting poverty’s insidious impact on children ages 0-3 and how county leaders can bring even more resources to bear on ending the pernicious cycle of generational poverty.

It is an outgrowth of President Brooks focus on the critical role counties play in breaking the cycle of multigenerational poverty as his term’s policy initiative.

“Counties can not solve the problem of poverty in our own. But we have the opportunity to survey the community, see who’s doing what and convene them to attack the issue,” he said as the Summit began.

The day’s first panel modeled the type of collaboration local leaders can undertake to effect significant change in changing poverty’s impact on children. Ft. Worth Mayor Betsy Price sees education as a key element in moving children and generations out of poverty’s grasp, according to panelist Mattie Parker, her chief of staff.

Subsequently Price set as her administration’s task a simple, yet powerful goal: improve reading readiness in the city so that by 2025 all third graders would be reading at grade level. Research shows that if a child is not reading at grade level by that time, he or she is unlikely to graduate from high school.

She turned to Kent Scribner, superintendent of the Ft. Worth Independent School District, the largest district in Tarrant County with 87,000 students, 77 percent of whom live at or below the poverty level with nearly half (43 percent) coming from homes where English is not the primary spoken language.

Both the mayor and Scribner engaged the business community in their efforts to increase reading readiness. Also on the panel, Kara Waddell, an early childhood expert, who stressed the need for intervention during the 0-3 years to assure that children are ready to learn.

The complications and challenges of growing up in poverty requires educators and social service providers to assume an additional skill set.

“They have to feel loved and safe to self regulate,” she said. Self regulation is the ability to control emotions and calm down when agitated.

"If a student is unable to self-regulate, we won’t be able to educate,” she said. “If you look at the problems we have in the upper grades, they stem from the children being unable to control themselves.

Her principal, Ronnita Carradine, said children who have been traumatized can have a hair trigger, which requires that teachers be trained in trauma-informed care.

Likewise, Linda Winkelman said, schools should be ready to work with families. She’s the child and family services and Early Head Start director at the Center for Transforming Lives.

“Two generation has always been a part of Head Start,” she said. “A child never walks into the classroom by himself, the whole family walks in with him. If you don’t do the dual-generation approach and help families while you help children, you won’t see the outcomes you want.”

State Rep. Ramon Romero, a Democrat who represents Fort Worth, said laws that can require people to present proof of citizenship has had a chilling effect on Hispanic parents seeking government services for their children. He has tried in vain to increase funding on the state level for school districts, which in turn have been hesitant to take accept funding for infrastructure upgrades they won’t otherwise be able to afford.

Texas Wesleyan University President Frederick Slabach said all education students must be bilingual or certified to teach English as a Second Language.

Urban vs. Rural Poverty: The Effects of Generational Poverty on Children and Communities

Poverty has a different history in every county, and four local government officials told the story of how it has played out in their communities.

“They only way you can get a job as a school teacher (in Piute County) is to wait for someone to die or retire,” he said. “The best way to open up our county to economic growth is if we had internet access.”

His extremely rural county has virtually no human services and if something is done, he said, it’s up to volunteers.

“We know our kids on a personal level, so we know personal situations that give us the biggest drive to want to reach and help out,” he said. “That’s a big difference between us and an urban county.”

When post-War War II legislation forced San Miguel County, N.M. families to forfeit their land in exchange for accepting food stamps, they lost a lot of their wealth.

Commissioner Rock Ulibarri said the distinction between the prosperous and impoverished parts of the county seat of Las Vegas fell along the lines of segregation that lasted until 1970. And it’s easy to find that line.

Even with a public transit system in Baltimore, City Councilwoman Sharon Green Middleton said people who rely on buses often have to take two each way to and from work in less affluent areas.

In one part of Baltimore, one grocery store shares a neighborhood with 30 liquor stores, bringing the idea of a food desert to an absurd extreme.

“People have to walk 10 blocks to buy food in some places,” she said.

Mobile County, Ala. saw its economy sucker punched twice when it was hit by Hurricane Katrina in 2005, then, before residents fully recovered, the Deepwater Horizon oil spill devastated the seafood industry.

With the city of Mobile cutting back bus service to the city limits, Commissioner Merceria Ludgood and her colleagues encourage employers to hold events like job fairs in rural areas.

“We have WiFi in every library because most job applications are online now,” she said.

The Impact of the Opioid Crisis on Children and Families

The numbers continue to stagger. Montgomery County, Ohio, with Dayton as its county seat, is on track this year to experience 800 deaths from opioid overdoses, more than double from the previous year, according to Montgomery County Commissioner Debbie Lieberman.

“We’ve been described as the drug overdose capital of the nation by the media,” Lieberman said.

In 2015, the most current available year for data, there were 64,000 opioid related deaths in the U.S., Regina LaBelle reported. LaBelle, who facilitated the panel’s discussion, served eight years in the Obama administration as senior policy advisor and chief of staff in the White House Office of Drug Control Policy.

The impact of these deaths and of the addictions which caused them disrupt families and send children into child welfare systems already significantly burdened, the panelists said. One in eight children in the U.S. live in households where one or both parents have a substance abuse disorder.

In 2016, 370 children entered Montgomery County’s foster care system, Lieberman said. Of those 310 were drug-involved. This year to date 406 children have entered the system

Dauphin County, Pa. Commissioner George Hartwick emphasized the important role caseworkers play in mediating the impact of substance abuse on children and families. His county set about deliberately to diversify its caseworker staff to reflect the cultural diversity of the county. The county also works to minimize caseworker turnover since it finds that the more caseworkers are involved with a family, the more likely a child will be removed.

In the face of the opioid epidemic, grandparents have become the defacto protectors of children affected by parental substance abuse. They step in to ensure that a child remains in a stable, nurturing family setting and are not ushered into foster care. There are 2.6 million children being raised by grandparents, reported Gail Gallagher, of Generations United , a national advocacy group providing legal resources for supporting grandparents within and outside the child welfare system.