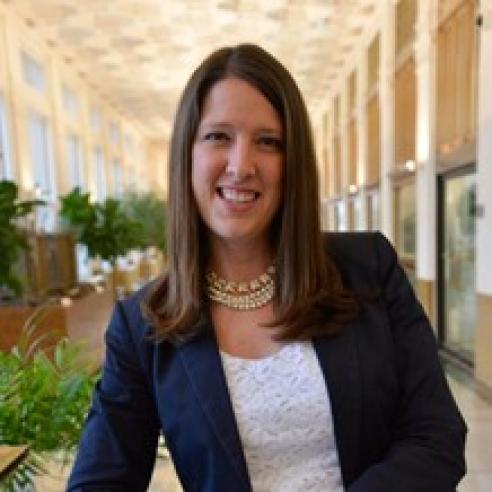 Kelly Geers is Director of Strategic Initiatives for Montgomery County, Ohio where she plans and supports the implementation of Montgomery County’s strategic and long-range goals, with a focus on catalyzing innovation, strengthening collaboration, and advancing results-based stewardship of resources. Previously, Kelly was tge Director of Workforce for Learn to Earn Dayton, a cradle to career initiative that works to ensure all students in Montgomery County fulfill their potential and are college and career ready. Prior to her work at Learn to Earn, Kelly served as District Director for Congressman Mike Turner (OH-10) where she led the Dayton office for the Congressman, overseeing local staff operations and district activities. Before joining Congressman Turner’s office, Kelly was Director of Government Programs at the Dayton Development Coalition where she led state and local advocacy efforts supporting Wright-Patterson Air Force Base and economic development in the 14 county Dayton Region. Kelly has a bachelor of arts in political science and a masters in public administration from the University of Dayton. In 2008, Kelly was recognized as one of the Dayton Business Journal’s 40 under 40 and a Women in Business Networking 25 Women to Watch in 2014.  She is a member and past-president of the Junior League of Dayton and served as chair of the Dayton Sister City Committee (DSCC). She served on the Montgomery County Arts and Cultural Board, the Dayton Art Institute Associate Board, and the Women’s Collaborative of Greater Dayton. Kelly is currently involved in the TEDx Dayton planning team and the YWCA Women of Influence Committee.