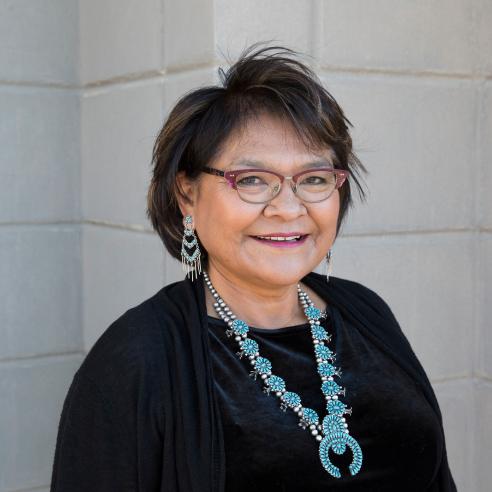 Described as a volunteer-at-heart, Lena has dedicated both her personal and professional life in service to others, with notable early career highlights such as founding the Tuba City Concerned Citizens volunteer group that is credited with cleaning up the shuttered Rate Metals Uranium Mill which was seeping toxic waste into the community of Tuba City just five miles away. During college, Lena served as the late Dr. Annie Dodge Wauneka’s personal secretary, and after college she as Arizona Senator John McCain’s first Native American Intern and Staff Assistant.

Lena’s most notable accomplishments include her work on creating county ordinances that support Native American ceremonies and customs, simplifying the Arizona Delayed Birth Certificates process for many Native American members to obtain their birth record, and serving as a Bill and Melinda Gates Foundation Economic Mobility Leadership Network fellow. She also serves as Vice-Chair of Rural Action Caucus for the Nation Association of Counties, Chair of Northern Arizona University’s Native American Advisory Board, and currently serves as Vice-Chair for the Coconino County Board of Supervisors.

While there are many areas of focus for Lena, she is most passionate about economic development. She knows that one cannot have a good education, a healthy mind and body, or a stable home without a secure, reliable, and well-paying job. The list of accomplishments in this area are long, however, most recently Lena helped to establish the Colorado Plateau Economic Development Alliance (CPEDA), a collaborative organization uniting Coconino County, the Navajo Nation, and neighboring cities and towns. With its newly minted articles of incorporation, CPEDA is now poised to make lasting change in communities impacted by generations of economic depression, compounded by the devastation of the COVID-19 pandemic.

Lena has three grown children, and true to her kind and caring spirit, nurses orphaned farm animals back to health, who she lovingly calls her babies.