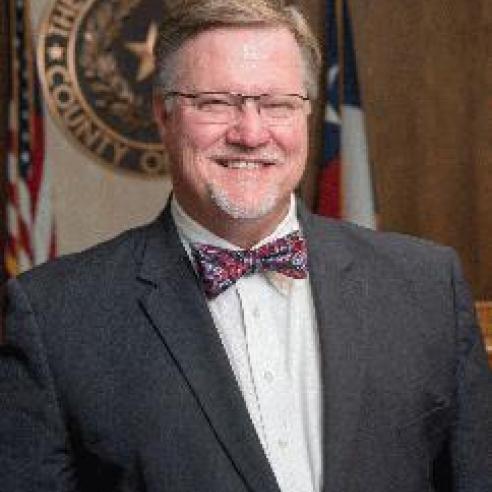 Curtis Parrish’s family roots run deep in the cotton fields of West Texas. He is a fifthgeneration West Texan. His great-great-grandfather came to West Texas after the Civil War to capture and break wild mustangs. Curtis attended Lubbock Christian University and Texas Tech University, where he graduated magna cum laude with a bachelors degree in political science and is a graduate of the Texas Tech School of Law. He is licensed to practice law by the Supreme Court of Texas. Judge Parrish was elected Lubbock County Judge in 2018, serving as the probate, guardianship and mental health judge for Lubbock County, as well as administrative duties with the Commissioners Court. Prior to law school, Judge Parrish worked in Lubbock media for over 16 years as an assistant news director and chief photographer. Following his career in media, he pursued his interest in legislature, working for Texas Senator Robert Duncan as a legislative aide and as the committee clerk for the Juvenile Justice and Family Issues Committee of the Texas House of Representatives. He is the former co-host of “West Texas Today” on AM950/100.7FM and legal analyst for Fox34 News at Nine. Judge Parrish has always been active in the Lubbock community, having worked with and served on the boards of several organizations, including Civic Lubbock, Inc., Lubbock United Neighborhood Association and The Salvation Army of Lubbock. He also had an active part in establishing the Buddy Holly Museum and was an integral part of the Buddy Holly Walk of Fame for many years. Judge Parrish is the long time public address announcer for Red Raider Football and announces numerous other Red Raider sports including baseball, basketball and soccer. Curtis and his wife, Brenda, have four children. They are members of the Broadway Church of Christ where he and his family are active in single parent and family ministries. Judge Parrish also sings with the Praise and Worship team.