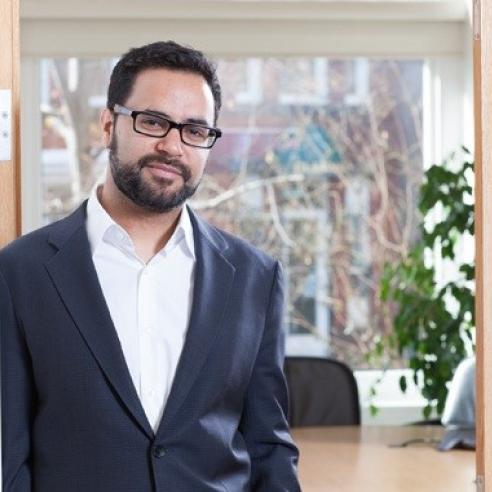 Deepak Gupta is the founding principal of Gupta Wessler PLLC. He specializes in Supreme Court, appellate, and complex litigation on a wide range of issues, including constitutional law, class actions, and consumers’ and workers’ rights. He has also taught courses on public interest law and appellate advocacy as an Adjunct Professor of Law at both Georgetown and American universities.

Deepak’s clients have included classes of consumers and workers harmed by corporate wrongdoing, sitting federal judges, members of Congress, state and local elected officials, technology companies, retail merchants, professional athletes, individual lawyers, and a wide array of non-profit organizations. He is frequently sought out by leading trial lawyers to defend their clients’  most consequential victories or to resurrect worthy claims on appeal, often after years of hard-fought, high-stakes litigation. He approaches each matter with a fresh perspective, a bird’s-eye view of the law, and a creative and strategic sense of how to reframe the issues for success on appeal. Judges and lawyers alike praise Deepak’s clear and simple writing style, and the National Law Journal has singled out his “calm, comfortable manner that conveys confidence” in oral argument.
Deepak has personally handled well over a hundred appeals, and has briefed or argued cases before the U.S. Supreme Court, all of the federal circuits, federal district courts nationwide, and seven state supreme courts. He has successfully opposed dozens of significant petitions for certiorari in the Supreme Court, preserving important victories for plaintiffs and the public interest. In a small number of cases, Deepak also works with clients and co-counsel to mount or defend constitutional and regulatory challenges and initiate class actions from the ground up.
Highlights include:

As a leading advocate in the battle over forced arbitration, argued before the U.S. Supreme Court for the respondents in AT&T Mobility v. Concepcion, represented a nationwide class of merchants in American Express v. Italian Colors, and regularly advocate for policy solutions through both Congress and the Executive Branch. Currently lead counsel to the American Association for Justice in defense of federal regulations limiting arbitration (Chamber of Commerce v. Perez). Brief for AAJ in Perez | Transcript in Concepcion

Arguing Expressions v. Schneiderman, a major commercial-speech case, before the U.S. Supreme Court in the new 2016 term. As lead counsel to merchants in the wake of the $7 billion Visa swipe-fee antitrust settlement, designed and successfully prosecuted a series of First Amendment challenges to state laws in 10 states that keep consumers in the dark about credit cards. Petition | More

As lead counsel to a certified class of federal judges (one of the few such classes in U.S. history), obtained a $56 million judgment arising out of Congress’s violation of the Constitution’s Compensation Clause and received the President’s Award from the National Conference of Bankruptcy Judges for work on the litigation. The American Lawyer profiled Deepak’s work, observing: “It’s hard to imagine a higher compliment than being hired to represent federal judges.”

As counsel to the family of an unarmed Mexican teenager shot by a U.S. border patrol agent, petitioning the U.S. Supreme Court to clarify whether the Constitution applies to a no-man’s land along the U.S.-Mexico border. Petition | Reply | Supplemental

As appellate counsel in Chevron v. Donziger, opposed Chevron’s efforts to collaterally attack an $8.6 billion oil pollution judgment won by indigenous residents of Ecuador’s Amazon rainforest. Businessweek observed that the advocacy of Deepak and his “impressive team” in the long-running legal battle meant that “the opposing parties’ legal forces have been equalized” in the “arena of appellate combat.” Second Circuit Brief | Reply | More

As appellate counsel in several major wage-and-hour cases, successfully obtained a Second Circuit ruling that a New York billionaire was personally liable to his workers for $3.5 million in Fair Labor Standards Act violations, and challenged Major League Baseball’s claim that its promotional events are exempt from the FLSA. Second Circuit Brief

As counsel to an information-services company, briefed and argued a U.S. Supreme Court case on the reach of the Constitution’s Privileges and Immunities Clause and dormant Commerce Clause. Argument Transcript

Before founding the firm in 2012, Deepak served as Senior Litigation Counsel and Senior Counsel for Enforcement Strategy at the Consumer Financial Protection Bureau during the agency’s historic founding. As the first appellate litigator hired under Elizabeth Warren’s leadership, he was instrumental in launching the Bureau’s amicus program, defending its regulations in court, and working with the Solicitor General’s office on Supreme Court matters. For seven years previously, Deepak was an attorney at Public Citizen Litigation Group, where he founded and directed the Consumer Justice Project and was the Alan Morrison Supreme Court Project Fellow.
Before that, Deepak worked on voting rights litigation at the U.S. Department of Justice, church-state litigation at Americans United for Separation of Church and State, and prisoners’ rights litigation at the American Civil Liberties Union, and spent two years as a law clerk to the Honorable Lawrence K. Karlton of the U.S. District Court for the Eastern District of California. He received his law degree from Georgetown, studied Sanskrit for one year at Oxford, and received his undergraduate degree in philosophy from Fordham, where he was elected to Phi Beta Kappa and competed in numerous parliamentary debate tournaments including the World Universities Debating Championships in Manila, Philippines and Athens, Greece.
In addition to his litigation work, Deepak has testified before the U.S. Senate and the U.S. House of Representatives, appeared on television and radio including CNN, FOX News, ABC’s World News and Good Morning America, and NPR’s All Things Considered and Marketplace, and has been quoted regularly by publications including The New York Times, Washington Post, Los Angeles Times, Wall Street Journal, and USA Today. Deepak occasionally writes for Consumer Law & Policy Blog and SCOTUSblog, participates in moot courts at Georgetown’s Supreme Court Institute, and frequently speaks at legal conferences and law schools on topics including the Supreme Court, class actions, consumers’ and workers’ rights, and constitutional law (especially the First and Second Amendments).
Deepak is a member of the Board of Directors of the Alliance for Justice, the Board of Directors of The Impact Fund, the Advisory Board of the Institute for Consumer Antitrust Studies, the Legal Affairs Committee of the American Association for Justice, and the Class Action Preservation Committee of Public Justice.