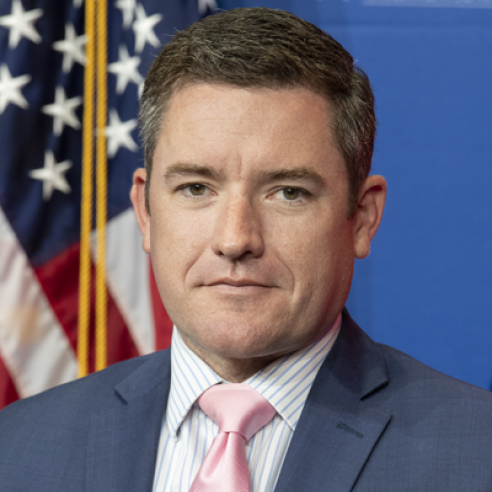 Mr. Brian Lenihan is the Executive Director of SelectUSA, managing the strategy and implementation of SelectUSA as it works to create jobs, spur economic growth and promote American competitiveness. He also co-chairs, with the Director of the White House National Economic Council, the SelectUSA Interagency Investment Working Group to coordinate existing resources across the federal government to promote business investment and address federal regulatory barriers.

Managing a professional staff within the International Trade Administration, he is among the senior officials responsible for executing the Administration’s plans to foster growth in U.S. jobs and investments in economic activities such as manufacturing, advanced technologies, research and development and energy exports.

Mr. Lenihan also serves as the Senior Advisor to the Chief of Staff to the Secretary of Commerce. In this capacity, he serves as a primary liaison to the Executive Offices of the President and proactively coordinates with the Deputy Secretary and Under Secretaries to oversee the development, implementation and communications of the Secretary’s policy initiatives. Mr. Lenihan previously served as the Deputy Assistant Secretary for Legislative and Intergovernmental Affairs for the Department of Commerce in 2017. Serving as Acting Assistant Secretary for Legislative and Intergovernmental Affairs, Mr. Lenihan was the Department’s principal liaison with the U.S. Congress, Governors and state officials, coordinating and overseeing the Department’s legislative activity, and advised the Secretary, Deputy Secretary and other senior leadership of the Department on legislative matters. Mr. Lenihan also led the confirmation process for the Presidential nominees who required Senate confirmation to serve at the Department.

Prior to joining the Department of Commerce, Mr. Lenihan was a government affairs professional that facilitated development and advocated on behalf of the non-residential construction industry’s federal policy positions. Mr. Lenihan has also served as an aide for three members of the U.S Congress. In previous positions, he represented several clients before Congress including top publicly-traded companies, private enterprises, municipalities, defense contractors, economic development authorities, small businesses and non-profit organizations. Additionally, he has been a frequent speaker and panelist for meetings and briefings in Washington, D.C. and around the country.