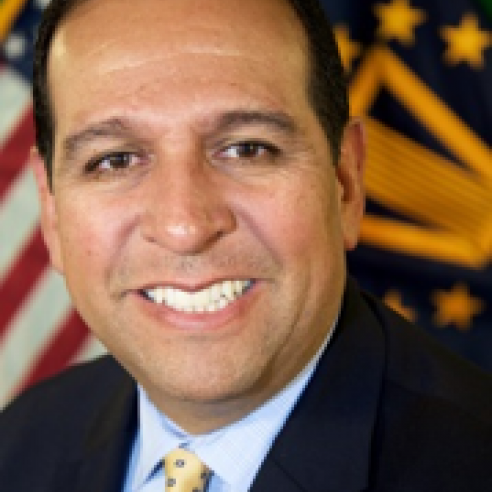 As Associate Administrator of the Office of Entrepreneurial Development, Allen Gutierrez is dedicated to enhancing the nationwide network of offices, business executives, and mentors that support current and aspiring business owners as they start, grow, and compete in today’s global market. This nationwide network includes the following Resource Partners: Women’s Business Centers (WBCs), Small Business Development Centers (SBDCs), and SCORE.

Most recently, Gutierrez served as the national executive director of The Latino Coalition (TLC). Under his leadership, the coalition grew to include 1.2 million Hispanic business owners and over 90 coalition partners, transforming TLC into one of the nation’s largest and most effective Latino advocacy groups. He also founded the Maryland-based MCA Group, which focuses on federal- and private-sector procurement, events management, and multicultural marketing.

Gutierrez previously served in the U.S. Small Business Administration from 2001 to 2006; during his tenure, he served as Senior Advisor to the Chief Operating Officer, as well as Senior Advisor to the Office of International Trade. Additionally, Gutierrez was a member of the senior team that executed the President’s Management Agenda to create a more transparent and results-orientated agency, as well as the Executive Resource Board advising the Administrator on matters involving senior management. During his tenure in the Office of International Trade, Gutierrez served as the key representative for SBA during the CAFTA-DR negotiations, which was signed into law as the first free trade agreement between the United States and a group of smaller developing countries.

Born in San Jose, Costa Rica, Gutierrez immigrated to California in 1974, where he achieved his dream of becoming the first member of his family to graduate from an accredited four-year college. He earned his Bachelor of Arts in political science with a minor in business administration from the University of Southern California.