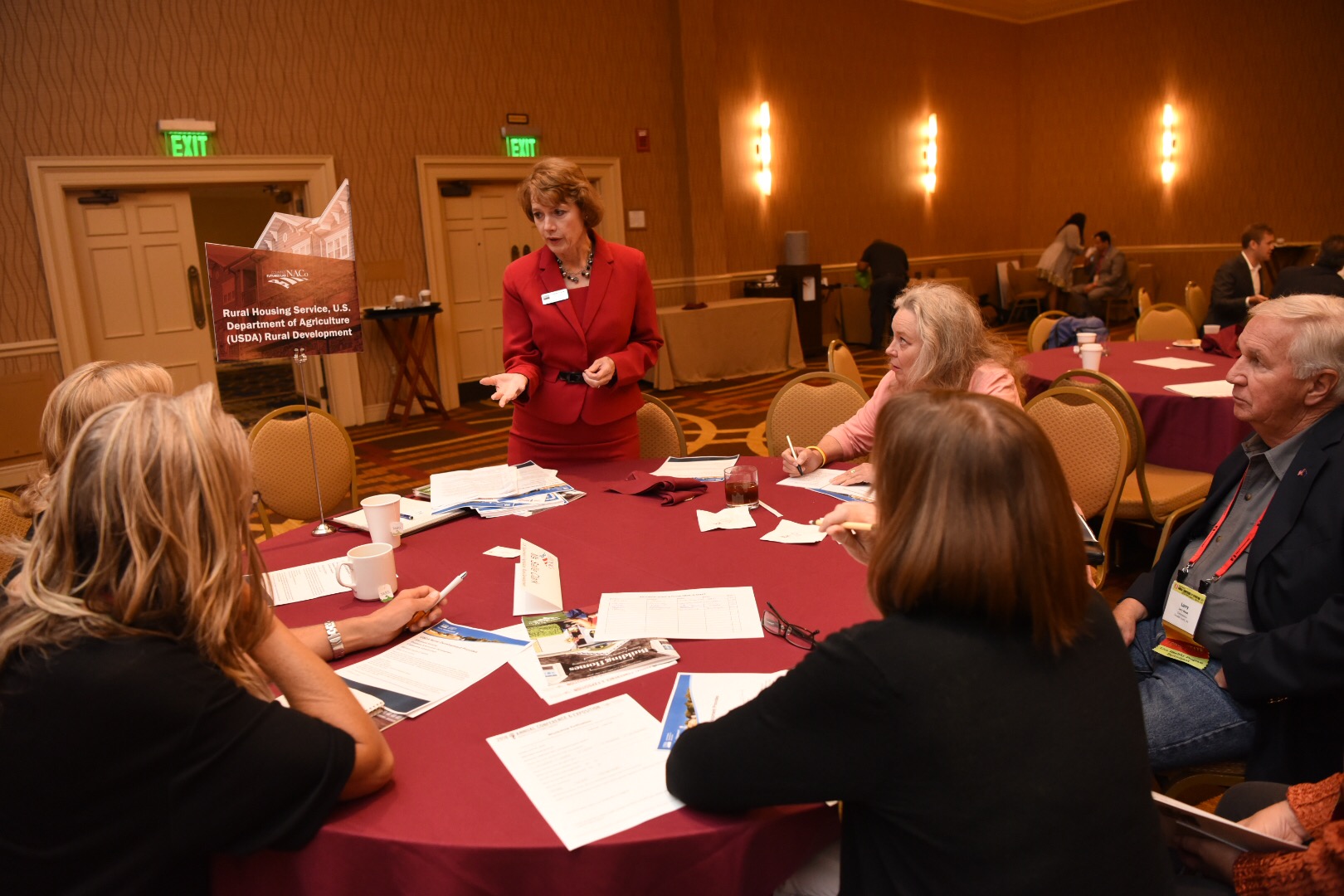 Participants at the Affordable Housing Forum speed network during a morning session.

NACo’s Board of directors accepted more than 100 policy resolutions to present to the NACo membership at their Annual Business Meeting, Monday. The board also approved a new member program — the NACo High Performance Leadership Academy — that would provide an integrated, online 12-week development program in high-level skill development for county staff  subsidized by NACo.

Other highlights from today included the Affordable Housing Forum that explored best practices for increasing affordable housing in the nation’s counties, educational sessions dealing with significant county challenges such as  ways to end poverty or revitalize declining Main Streets.

How to finance a reboot of Main Street

You can also go the imaginative route: Mercer County, W.Va. Commissioner Greg Puckett, also a panelist, put himself high in the air in a bucket truck to raise money and said he wouldn’t come down until $10,000 was raised for revitalizing their downtown. “We raised $11,400,” he told the audience. Plus, he noted, residents had fun saying “Puckett in a bucket!”

Part of the revitalization efforts in his county, he said, were as simple as buying $150 worth of paint to spruce up old buildings. They also got artists involved who painted murals in a dark alley that became “Artists Alley” and is now lit up at night with bright lights. The county has seen a lot of revitalization — with downtown buildings being purchased, a new microbrewery restaurant opened and six events held in the downtown area each year.

Despite several initiatives in place to address intergenerational poverty in Durham County, N.C., Commissioner Brenda Howerton said the efforts have largely been lost on much of the public.

“What I hear is ‘You’re not doing anything to impact our lives, you’re doing research, research and analysis but it’s not shifting the needle,’” she said.

“We have to value all individuals and populations equally and recognize and rectify historical injustices,” she said, adding that putting all major decisions in proper historical context was crucial. When it comes time to allocate resources, she said, provide them according to need.

“That requires establishing some metric of need,” she said, which also required proper study of poverty in rural areas.

“We want to make those spots available for families with histories of children being removed from the home, children who have experienced some abuse or neglect,” she said. “ It will help get them into the services that will get the child the tools they need,” to be successful.

Jones stressed the need for county leaders to recognize where their social, economic and racial privileges affect their decision making that could affect people in need of help.

Erie County, N.Y. Executive Mark Poloncarz described the relatively new layer of consultation by which the county government studies the consequences its new policies would have on the African American population.

“Whether you know it or not, the bottom is about to fall out of our death investigation system in America,” Andrew Baker, M.D., chief medical examiner for Hennepin County, Minn., warned NACo members Sunday.

Baker was part of a panel discussion on “The Opioid Crisis: Supporting County Medical Examiners and Coroners Offices.” In addition to the increasing number of overdose deaths due mainly now to fentanyl and its offshoots, it’s hard to hire new forensic pathologists because they often choose to go into private practice where they can earn $100,000 more per year which helps to pay huge education bills, Baker noted.

A concern among several in the audience: How to pay to beef up the budgets for a coroner's office?

A member of the audience, Michael D. Rodriguez, executive officer, Office of the Medical Examiner, Cook County, said the county has raised cremation fees from $50 to $100, which is expected to generate an extra $1 million per year. The fees are paid by the funeral homes to the county.

Squeaky wheels get the grease that helps them operate better

In the early 1990s, Maxine Aldridge White was sent to Washington, D.C., coming back to Milwaukee County with a grant to start a drug treatment court. Despite support from her bosses, she was told that the court system should leave those programs to probation officers.

Now, as chief judge of the first judicial district, she not only feels free to not “stay in her lane,” but she wants the criminal justice and law enforcement environment looking more like bumper cars.

A lawsuit eventually shook Milwaukee County out of the status quo and help rebuild relationships to focus on helping people who display the greatest need.

“We’ve learned better about what criminal justice is all about, it’s about tearing down those silos, those walls and finding a way to really get to the business of the people,” she said. “Ultimately making us safer in our communities.”

Now she meets monthly with the sheriff, district attorney, city attorney, public defender, department of corrections and more to holistically look at the Milwaukee area’s criminal justice system and how different players intersect.

Pat Farr, a commissioner in Lane County, Ore. described the Frequent User System Engagement project that analyzes the county social service and justice system users’ patterns to figure out how best to treat their underlying needs and in the process, save money.

“It was no surprise to us that having supportive housing is fundamental to people making progress and becoming more independent,” he said.