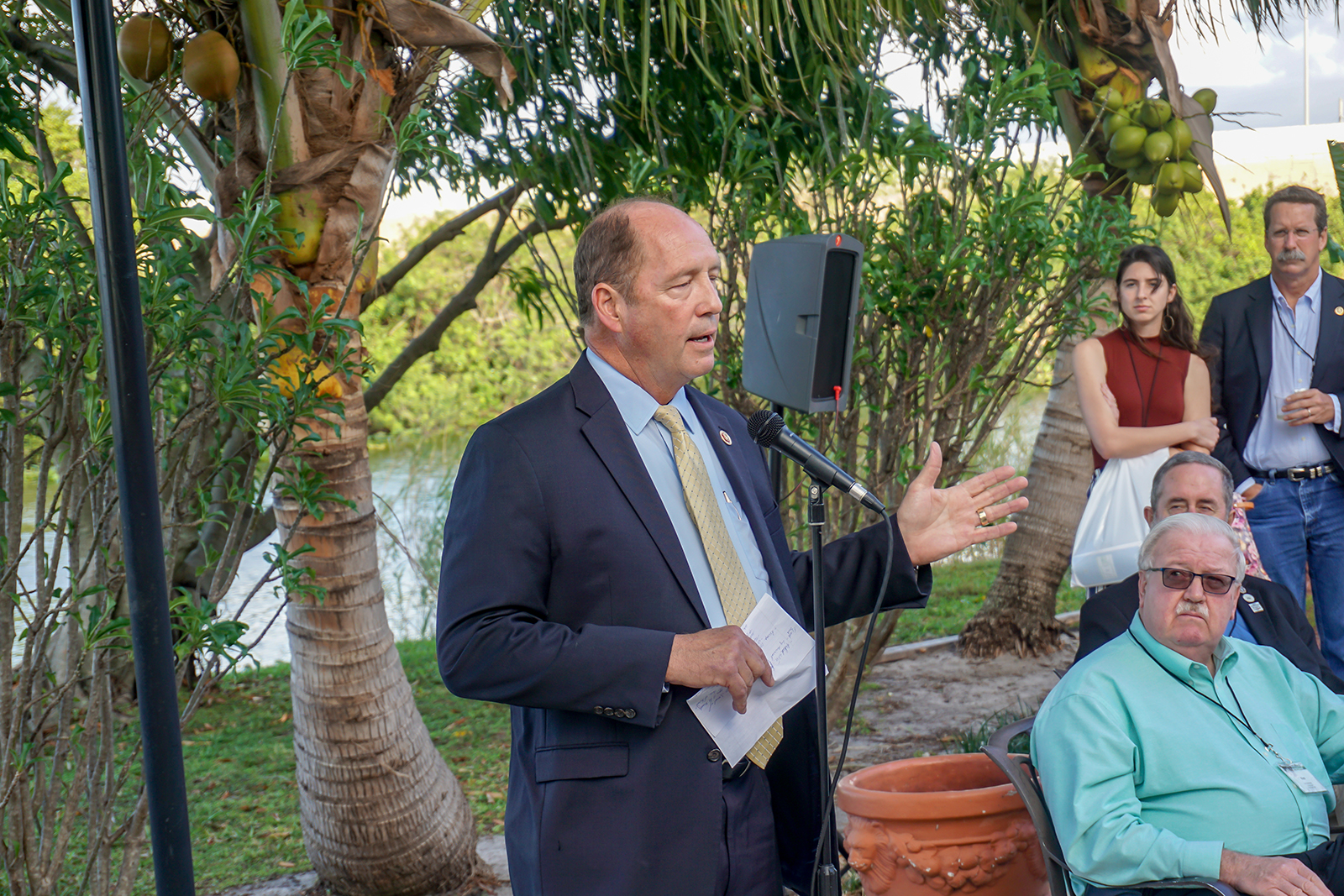 Yoho made his observation while addressing NACo’s Rural Action Caucus (RAC) during RAC’s Farm Bill Summit in Palm Beach County, Fla. April 4. He said the draft of the $800 billion Farm Bill would not cut safety net programs, chiefly SNAP — the Supplemental Nutrition Assistance Program — but would include 20-hour work requirements for able-bodied adults without dependents, ages 18-65. He also hinted at funding for job training.

Photos from the Farm Bill Summit

“The goal is not to take anyone off of food stamps,” he said. “The whole goal is to get people educated. We’ll reeducate people, give them job training.”

He also teased at increased flexibility in SNAP eligibility, including a three-month tapering off period when recipients’ earnings rise too much.

“In the old Farm Bill, you could never have a car worth more than $3,400, and that’s been in there since the ’70s,” he said to attendees at the opening reception at the Hilton Palm Beach Airport hotel. “(Now) you can have a car worth $12,000 and a savings account of up to $2,000. They want people to work to self- sufficiency and independence.”

Set against a potential trade war with China that would affect U.S. agricultural exports, Yoho said of President Trump and Agriculture Secretary Sonny Perdue, “They will not allow the American farmer, ranchers the producer of American agriculture to be held hostage in any of these trade negotiations.”

But Yoho acknowledged that “the new Farm Bill doesn’t do a lot for trade,” but said “The big, important thing to remember if when we’ve got imbalances in trade, it’s not good for us, it’s not good for anybody who is on the short side of that, we’ve got a $357 billion deficit with China. We’ve got to adjust these commodity prices via tariffs, whether it’s steel, aluminum or corn.”

Yoho said the House Agriculture Committee’s work on this Farm Bill dwarfs what was done in advance of the 2014 Farm Bill, which reduced SNAP funding by $8.7 billion over 10 years.

While the House may move forward with more work requirements, the Senate’s version of the Farm Bill will likely take a more conciliatory approach.

That’s what Ellen Vollinger, legal director for the Food Research and Action Center, sees happening. She said that Senate Agriculture Committee Chairman Pat Roberts’ (R-Kan.) desire for a bipartisan bill that would garner 60 or 70 votes would mean SNAP eligibility limitations and benefit cuts are nonstarters.

“It’s very unclear whether a Farm Bill will move, but if it does move, the more productive path … can have bipartisan bill,” she said.

SNAP is disproportionately important in rural areas, with more than 20 percent of residents receiving benefits in one-quarter of rural counties.

“It’s an important support for rural economies,” she said, noting that $1 of federal SNAP funding ends up generating $1.79 in local sales.

“We need to increase the gross income test,” she said. “That will show if people have so many costs — child care, housing —that they have a net-income and can actually use SNAP benefits.”

Vollinger warned counties about the consequences of eroding federal support for SNAP.

“If the federal government removes some supports that they have, it would be a cost shift you would see,” she said. “When the feds take themselves out of the equation and don’t step up to the responsibility, it’s not as if the people go away, it’s just that they’re left to state and local governments, to charities and to their own resources to fend for themselves. So, there’s a lot at stake, but we’re very hopeful that as the traditional Farm Bill coalition comes together around a bipartisan support, people will see a more productive path.

The philanthropic sector is not suited to substitute for decreased SNAP benefits, Feeding Florida Executive Director Robin Safley said, pointing out that for every meal a charitable org provides, SNAP provides 12.

“We don’t have all the points of service,” she said, compared to network of businesses that accept SNAP benefits.

Programs that encourage healthier eating work, she said, when they help consumers afford that food.

“Individuals who are on SNAP — living in food deserts — are not going to avail themselves of the healthiest opportunities to eat, but when you give them an incentive, so that their dollar becomes two dollars to spend on healthy food, they really do purchase it.”

Where they get it, however, is a problem.

“You can have SNAP benefits, but if you have nowhere to play that benefit, then you really don’t have the benefit,” she said. “When you look at rural Florida, we only really have Wal Mart and Publix, we don’t have that middle-sized grocery store with an extensive offering.”

She touted the Farmers Feeding Florida program, which pays farmers for the picking and packing costs for food that is safe but would otherwise have gone to waste, a figure she pegs at 40 percent of all produce. Farmers receive a federal tax deduction for that produce.

Ernie Barnett, executive director of the Florida Land Council, and Russell Morgan, the Florida State Conservationist at the Department of Agriculture, examined how local farmers use farm bill conservation programs consistent with local land use policies and controls.

More than the seashore

Summit attendees saw a variety of Palm Beach County’s agricultural players in the western part of the county, including a sugar cane growers cooperative and  business that turns the pulpy residue from sugar cane into biodegradable plates and containers, Florida’s only rice mill and the packing house for the largest rice grower east of the Mississippi.

Mobile tours also included a regional hospital and the county’s growing Glades Lake Region Water Treatment Plant, which has dramatically reduced the loss of treated water. That creates greater treatment capacity that allows for residential and agricultural use of western Palm Beach County land, which is inundated with brackish, non-potable water.