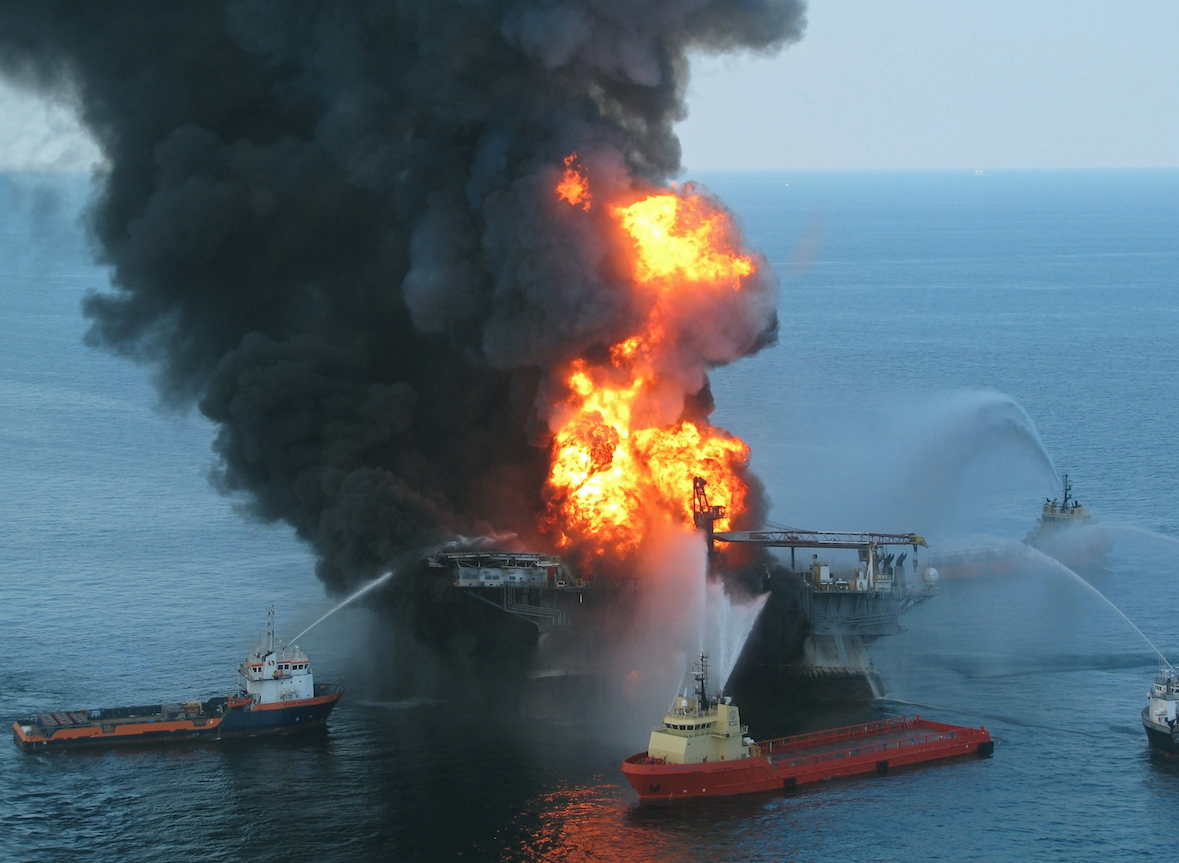 LOUISIANA
PLAQUEMINES PARISH will receive a settlement of $45 million from BP, formerly British Petroleum, over damages from the 2010 oil spill in the Gulf of Mexico, the parish recently announced. Oil from the Deepwater Horizon offshore oil rig explosion fouled sections of the parish’s coastline, and fishing and oil businesses suffered from the spill, the Associated Press reported.
“The money is going to help us with infrastructure,” Vince Frelich, director of the parish’s coastal restoration, told LouisianaRecord. “We’ve had water (problems) since Katrina, so we’ve been working on building another water system and (updating) the drainage and sewer systems and our levees. That’s one of our most important (projects) for the public at this time.”
The parish opted out of a $20.8 billion agreement BP reached two years ago that was split between five states, and federal and local governments.

After the state Legislature cut funding for mental health care in the state, county sheriffs’ departments are spending more time dealing with calls from the mentally ill. LAUDERDALE COUNTY is teaming up with the City of Florence to combat the problem. The county recently swore in a police sergeant to serve as the new coordinator for Community Mental Health Officers. The new coordinator will have the authority, through the county probate judge, to involuntarily commit those with mental illness, until a hearing can be scheduled. Two deputies from the county sheriff’s department are also in training for how to respond to crisis mental health calls. They’ll work with four city police officers who have also been trained.

NORTHWEST ARCTIC BOROUGH has struck a new payment in lieu of taxes agreement with Teck Alaska, operator of the zinc-lead Red Dog Mine in the borough. For the next 10 years, the borough will receive annual payments from Teck Alaska estimated to be between $14 million and $18 million per year, according to Alaska Public Media. A new Village Improvement Fund will also be created with separate funds of $4 million to $8 million per year and go toward community services and infrastructure with input from 11 villages.

SAN DIEGO COUNTY recently completed its first online auction of real estate properties, raking in $5,613,700, a record-breaker for the county, according to the San Diego County Treasurer-Tax Collector’s Office. The last auction, held in 2013 at the San Diego Convention Center, took in $3.49 million.

“We wanted to open this auction up to a worldwide audience, and moving it online allowed us to do that with great success,” said Treasurer-Tax Collector Dan McAllister. “Our team did a fantastic job finding the right system that makes it easy for bidders to take part in our auctions from now on.” More than $2 million will go to pay back taxes and fees, leaving about $3.6 million in proceeds.

The county will hold another auction in July, hoping to unload another 1,000 properties, mainly timeshares. Starting bid? $100.

A former state senator says that “It’s Time for County Government in Connecticut” in an opinion piece in the Hartford Courant. The state did away with county governments years ago, but Gary LeBeau writes that the state’s 169 cities and towns are eating up budgets due to redundancy in services, especially school budgets.

“In Connecticut, we have a total of 538,893 students in public schools whose education is managed by more than 160 bureaucracies and their attendant costs,” he wrote. “I am not talking about doing away with any direct services to students or to citizens. I am not proposing that one teacher, principal, police officer or park worker be laid off. I am proposing that management be consolidated to save millions and millions of dollars throughout the state.”

NEW CASTLE COUNTY Executive Matt Meyer signed an executive order May 24 addressing the issue of undocumented residents in the county. The order clarifies the county’s policy in four areas: law enforcement, cooperation with federal authorities, the collection and sharing of immigration status information and access to county services.

“Our goal here is not to play into some national game — bucking up or agreeing or disagreeing with any federal immigration policy,” Meyer said at a public ceremony, surrounded by immigration advocates. “It’s to clarify what our county government is doing, what we’re doing for you, how we’re using your taxpayer dollar and making sure those living, working, playing across our county are aware of what that work is.”

Due to a lack of jail space, LAKE COUNTY has created the Sheriff’s Labor Detail program, which allows inmates to work eight hours of community service in exchange for two days off their jail sentences, according to a news release from the sheriff’s office. There are currently 800 people in the county waiting to serve jail sentences, according to the Daily Inter Lake newspaper. Since the program started in April, inmates have helped decommission police cars for auction, rake the courthouse lawn and pick up trash on county roads. The sheriff’s office also takes requests from non-profits that could benefit from work performed by the labor detail inmates.

• Dwindling landline phone fees funding OSWEGO COUNTY’s 911 coffers are prompting legislators to consider a 30-cent monthly charge on all cell phone bills in the county. The money would be going towards staffing and maintenance at the county 911 center.

The county has lost more than $50,000 in 911 funding over 10 years. Oswego is only one of five counties in New York that currently doesn’t impose the fee on mobile phones.

• Non-profit organizations that rent out rooms in WARREN COUNTY may soon have to pay a 4 percent occupancy tax under changes to the tax that would take effect in 2018.Treasurer Michael Swan has proposed doing away with an exemption for nonprofits because the law makes it difficult to determine who among the numerous cottage and cabin rental business owners have to collect the tax. The Post-Star reports that Swan would like to standardize tax collection for organizations that rent out four or more cottages or cabins.

County recorders cannot remove racist language from old deed restrictions and covenants, according to a ruling by a federal judge.

U.S. District Judge William O. Bertelsman said the Ohio Legislature never gave county recorders the authority to alter documents, even those that say certain lots are “exclusively for the White Caucasian Race” or “American Citizens,” and other examples written before the Fair Housing Act of 1968 outlawed such discrimination.

The complaint argued that county recorders violate that law when they provide documents in a land transaction that include clauses that are restrictive, based on racial identity.

WYANDOT COUNTY Sandy Micheli, president of the Ohio Recorders’ Association, told the Columbus Dispatch that although the group does not condone racial covenants, the documents have historical value because “those are the kind of documents that led to the civil-rights movement,” she said.

•  ADAMS COUNTY will soon offer mental health services for the first time, including early intervention, mental health and intellectual disability services. Residents previously had to travel to YORK COUNTY for treatment.Services provided by 13 staff members will be housed in the county’s new human services building, and will begin during the summer, The Evening Sun reported.

• With 130 municipalities, ALLEGHENY COUNTY ranks second nationally, behind only COOK COUNTY’s 135. Now County Executive Rich Fitzgerald is hoping the state Legislature will pass a bill allowing some of those governments to voluntarily unincorporate.

The Pittsburgh Tribune-Review reports that Fitzgerald hopes a bill that would allow disincorporation, in Allegheny County, would be introduced in the Legislature by the end of the year. The county’s municipalities range from more than 300,000 in Pittsburgh down to 63 in Haysville. Of the 130 municipalities, 40 have fewer than 2,000 residents.

•  DAUPHIN COUNTY is offering veterans ID cards so they can easily cash in on discounts offered by local businesses. Interested veterans bring their certificate of release or discharge from active duty, and stop by the county courthouse to get a card, printed in minutes. The card provides an extra layer of proof of their status to local businesses. Businesses that offer discounts can be listed on a page on the county’s website.

The lawsuit charges that the law, if enacted, would violate several provisions of the U.S. Constitution, including the 14th Amendment’s guarantee of the equal protection of laws and due process clause; and the Fourth Amendment protection against unreasonable searches and seizures, the Texas Tribune reported.

The law allows peace officers to question the immigration status of people they legally detain or arrest and punishes department heads and elected officials who don’t cooperate with federal immigration agents by turning over immigrants subject to possible deportation.

Elected or appointed officials found in violation could face criminal charges in the form of a class A misdemeanor and possible removal from office. It is scheduled to go into effect Sept. 1.

El Paso County agreed in 2006 to a court settlement after a local resident sued, accusing sheriff’s deputies of conducting unlawful immigration checks at roadside checkpoints. The parties reached an agreement: The sheriff’s office had to “memorialize in writing its policies that prohibits Sheriff’s Department deputies from enforcing civil immigration law.”

A posse’s days may be numbered. A manhunt in STAFFORD COUNTY ended after sheriff’s deputies used a drone to locate a man who had shot into a vehicle.

When deputies arrived on the scene, the man was gone. Although the drone was also equipped with infrared cameras to track body heat, the normal camera helped the drone operator see the suspect’s movement, deputies told NBC 4 News. The footage helped SWAT team members apprehend the suspect.

A 20-second scan of an inmate’s iris is supplementing fingerprint records in the MILWAUKEE COUNTY Jail.

The sheriff’s office is the first agency in Wisconsin to adopt this technology, already in use in more than 100 law enforcement agencies nationwide, according to Wisconsin Public Radio. Though the scans won’t replace fingerprints, they will be added to a national database that currently sports 1 million scans.

The national nonprofit Corporation for Supportive Housing has selected four counties to participate in a new Social Innovation Fund Pay for Success initiative that will focus on using criminal justice and homelessness data to ensure those leaving incarceration will successfully reintegrate into communities, reducing recidivism and improving public safety. The four counties selected — SALT LAKE COUNTY, Utah, BOONE COUNTY, Mo. CLARK COUNTY, Nevada and MCLEAN COUNTY, Ill.  — will receive technical assistance to integrate data from their homelessness assistance and criminal justice agencies to better match eligible individuals with supportive housing efforts that could be financed through the use of the private-public-philanthropic funding found in Pay for Success partnerships.

News from Across the Nation is compiled by Charlie Ban and Mary Ann Barton, senior staff writers. If you have an item for News From, please email cban@naco.org or mbarton@naco.org.