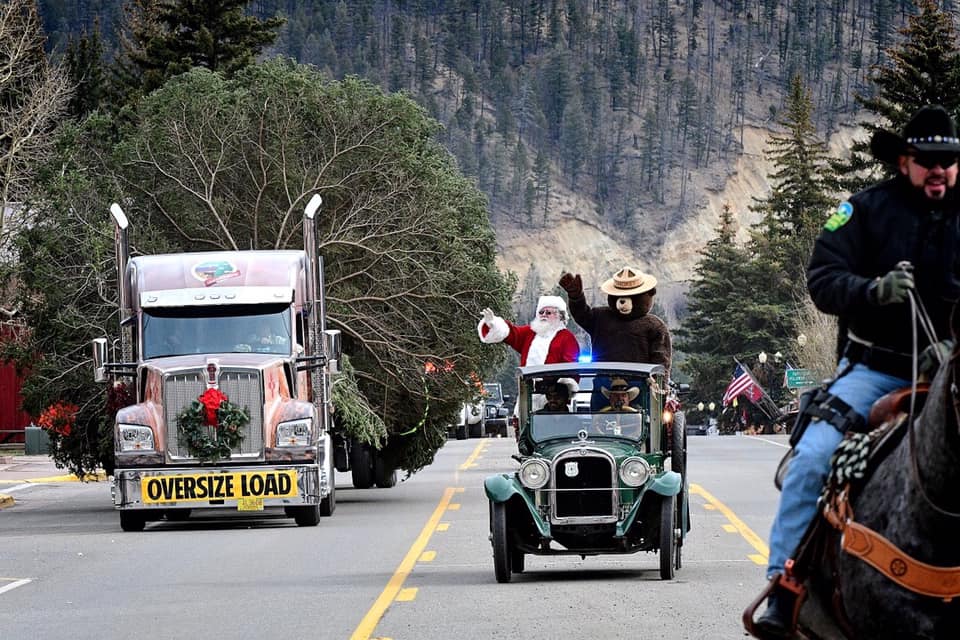 Santa Claus and Smokey the Bear lead the parade in front of the 2019 Capitol Christmas Tree as it leaves the Carson National Forest in Taos County, N.M. Photo courtesy Taos County Sheriff’s Office

In order to filter by the "in queue" property, you need to add the Entityqueue: Queue relationship.
The U.S. Capitol Christmas Tree came to Washington, D.C. from Taos County, N.M.

Dressed in safety gear with a helmet on his head and a chainsaw in his hands, Mark Gallegos, who chairs the Taos County, N.M. Commission, stood underneath a 60-foot Blue Spruce tree in the Carson National Forest.

While Gallegos has a family background in logging, this tree was not headed toward what was once his family’s sawmill. Gallegos was cutting down the 2019 Capitol Christmas Tree that will stand on the West Lawn of the U.S. Capitol in Washington D.C. this holiday season.

“They just said make a nice, clean cut and stay as flat as you can and make sure it doesn’t swing back and hit you,” Gallegos said.

Gallegos, who also serves as mayor of Questa, a small village within Taos County, said this year’s Capitol Christmas Tree is from the Questa Ranger District of the Carson National Forest in a community called Red River.

The tree not only has to fit the landscape of the Capitol, Kaufmann has noted, but it must be full without a bad side because it will be viewed from all angles.

The tree also needs to have flexible branches to survive being packaged and transported to Washington and must be capable of holding thousands of ornaments.

Taos County Manager Brent Jaramillo said trees from the Carson National Forest are sturdy, hold up well in different areas of the country and require less water because of New Mexico’s dry climate.

“It’s a great honor,” Jaramillo said. “It feels amazing to be in the national spotlight, to know the tree came from our county.”

The 68-year-old tree grew in a prime location close to the roadway and in a flat spot which made it easier to access with cranes, Gallegos said.

Before making the cut, the tree was secured with a cable and a strap to prevent it from falling and breaking branches.

Gallegos said he was shocked that he was asked to cut the tree down, but said it was fitting for the town of Red River to ask him as the mayor of neighboring Questa because it meant both communities could participate in the event.

“It’s kind of hitting me now about how significant [it is] being a part of the whole ceremony and actually cutting down the tree,” he said. “It is a big deal.”

The communities held a ceremony with a group from a nearby pueblo blessing the tree before it was cut down.

Santa Claus and Smokey the Bear led a parade to Red River where a bigger celebration took place and attendees could take photos with the tree.

A company built a special truck and trailer to transport the tree.

Once the tree left Red River, it was taken to a local contractor’s barn in Questa that was large enough to fit both the tree and the truck. Crews worked overnight to prepare the tree for its official send-off.

On its route to Washington, D.C., the tree made more than 25 stops across the country including Albuquerque, El Paso, San Antonio, Nashville and Atlanta.

Gallegos said he’s watched videos of people lining the streets in different towns and cities to catch a glimpse of the Capitol Tree.

“It gives a little bit of hope to people around the country. It gives our community a little bit of recognition,” he said. “It just intensifies who we are, what we do out here to not be forgotten.”

Taos County employees and their families made Christmas ornaments for the tree along with school districts throughout the state.

Dean was invited to join Grisham and Speaker of the House Nancy Pelosi at the tree-lighting ceremony in Washington, D.C.

“Maybe D.C. might see this tree and think about small rural communities when they’re making these decisions that may affect other places,” Gallegos said. “The heartbeat of America is always going to be the small communities because there’s so many of them.”

The county is planning to put a plaque on the tree’s stump to mark where the 2019 Capitol Christmas Tree was cut down.

“For the next 30 days, we can say we have a little footprint over there in D.C. and anybody that wants to know where this tree came from, they’re going to find out what these little communities are about,” he said. “I think that’s what makes the story so cool.”