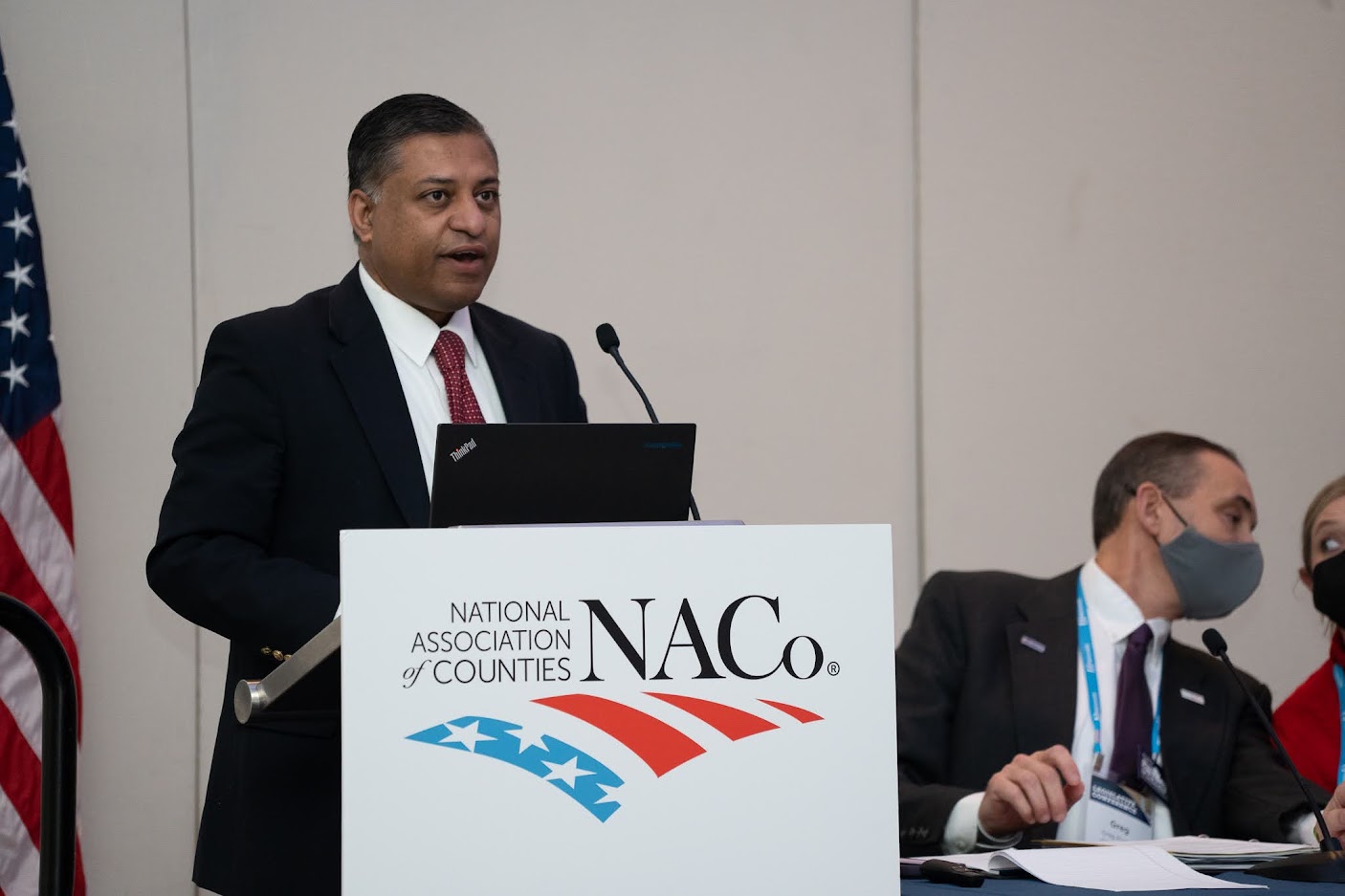 Rahul Gupta is behind the wheel of a great big truck, but he knows how to navigate the winding roads all over the country, thanks to his experience in one of the most mountainous states.

Following a long line of attorneys, academics and law enforcement veterans, Gupta is not only the first physician to lead the Office of National Drug Control Policy, but also the first with experience in county government, after six years in charge of public health agencies in West Virginia, for Kanawha County and Charleston and neighboring Putnam County.

Gupta will elaborate on the Biden administration’s drug control strategy and the resources available to counties in a conversation with NACo Executive Director Matt Chase during the Opening General Session for the 2022 NACo Annual Conference July 22 in Adams County, Colo.

Gupta’s background will prove vital in executing a hard pivot in federal policy, one in the face of a continuing substance abuse epidemic fueled by opioid-based painkillers, that effectively reaches local governments.

Gupta also served as West Virginia’s state health commissioner and as a drug policy advisor on Joe Biden’s presidential transition team in 2020 and 2021.

“President Biden clearly recognized that this is a public health crisis, and we have to address it by bringing all public health and public safety folks together and someone like me has done exactly that in their career,” Gupta said during a recent interview.  “Having influenced and worked to develop the president’s strategy in a way that really reflects 21st century challenges but also 21st century solutions and being realistic on what we could achieve…is very important to me.”

And having worked in county and state public health, he could judge which aspects of the national drug control plan would resonate with local officials and practitioners and which plans would be relegated to the bookcase.

The administration’s solutions and goals prioritize saving lives through a combination of harm reduction and expanded treatment, law enforcement efforts to cut off illicit drug trade and resources to test for counterfeit prescription drugs that contain fatal amounts of fentanyl.

“Your chances of dying with counterfeit medications are worse than playing Russian roulette,” Gupta said. “We’re at an inflection point in our nation’s history where behind these 107,000 deaths a year, there are millions of people who have non-fatal overdoses, and underneath that is tens of millions of people who’ve suffered from addiction and substance use disorder. We have probably about 40 million or so that are going to need treatment and we’ve got a fraction — less than one of 10 people — who needs treatment is getting it today, so that’s the sort of magnitude of the challenge that we face.”

While fulfilling his post-residency service to an underserved community in Covington County, Ala., Gupta developed strong relationships with his patients in his rural community, and those experiences drove him to pursue a career in public health when the scope of the social determinants of health became apparent. Within weeks of arriving in West Virginia for his first public health job, he was one of two full-time county health officers in the state when the H1N1 pandemic hit.

“We had no option but to lead,” he said. “The thing about working at the local level is that everything is your problem, everything becomes your job and you don’t necessarily get to go for training for every one of them and you don’t have experts right next to you sitting for everything.”

He faced a number of challenges in county public health, including combating the proliferation of “shake and bake” meth labs, inspection and remediation of motel rooms that had been used as meth labs and enforcing stricter controls on over-the-counter medications in pharmacies.

In 2014, a chemical spill in the Elk River upstream of a major drinking water intake threw nine Charleston-area counties into crisis. He also combated obesity, pushed for a state Medicaid expansion and addressed the growing substance abuse trends. He saw the seeds sprouting years before.

“When I was a physician in Alabama, I would see the drug sales representatives come to my office at least two times a week and push and give samples of these opioids,” he said.

He also led the Kanawha-Charleston Health Department effort to become the first accredited local health department in the state, and in doing so also established a logo and branding campaign that made the department more recognizable, helping to establish public credibility.

“There’s a genuine feeling of helping your community move forward and to be able to provide the sort of leadership that helps improve the health and lives for individuals is very rewarding,” he said.

Those six years leading public health efforts in two counties showed Gupta exactly the people he’ll be counting on to help execute the national drug control plan, the recipients of federal support, the feet on the ground and the ears and eyes who will be able to respond back with results, and other feedback to help refine the administration’s strategy and tactics.

And he learned firsthand the working conditions that public health officials face, from working with elected officials to building coalitions with businesses, the faith community and others.

“I felt like I’ve got to be able to figure out ‘How do you practice public health at a very local level to understand the real challenges that communities face?’” he said. “I appreciate the hard work my colleagues all across federal government do, but the fact is that having worked in a local level is such an important part of your DNA, it allows you to really understand, [to] have been there and done that.”

When he moved to state government, Gupta launched a “social autopsy” to gather data on the nearly 900 opioid overdose deaths in 2016.

“We wanted to find out how we can understand and learn from the dead in order to save the living,” he said.

That meant looking a year back in each of those people’s lives, scouring medical examiners’ records, EMS records, behavioral health records and more. Their families helped fill in where they were working, their level of education, their family lives and other social factors. And the heavy numbers came into play: How many times they overdosed before they died. Were they incarcerated? Did they undergo any treatment?

As Gupta zoomed out, he saw startling trends, including that four out of five people who died from overdoses had come into contact with the health care system before they died, illustrating a systemic failure in helping them.

“That’s the kind of thing that informs what I do every day, because those total numbers have been replicated all over the country,” he said.  “We saw 56 percent of people dying of an overdose within a month of leaving incarceration; if you saw three doctors, you were three times more likely to die, and if you went to five different pharmacies shopping for drugs, you were like 70 times more likely to die.”

The conclusions the report reached helped the state mobilize quickly to fill some of those gaps, which resulted in West Virginia showing the first drop in opioid death rates in the country in 2018.

“It was clear that what we need to do is expand treatment, stop people from dying with naloxone and then make sure data systems are in place that can capture those people before they die. At the end of the day, you’ve got to have data.”

Since the scope of the addiction crisis rose to the American consciousness, several other crises have overtaken it, not the least of which has been the COVID-19 pandemic, which hit its own million-life mark recently. Refocusing county officials takes a close relationship with Gupta’s friend as state health commissioner — numbers.

“I think the most important way we could do that is by raising awareness of the fact that three out of four people that are dying right now out of the 107,000 is because of opioids like illicitly manufactured fentanyl, what that also means is if we had naloxone right there, we could save tens of thousands of lives right now,” he said.

“The first thing we have to do is focus on what works to save lives, and one of those strategies is to get naloxone to people. Once we save their lives, let’s get them connected to standard treatment. The other most important piece of course is going after the bad guys, making sure that we’re going after drug trafficking profits. These are poly-national criminal organizations that are holding communities hostage all over the country.”