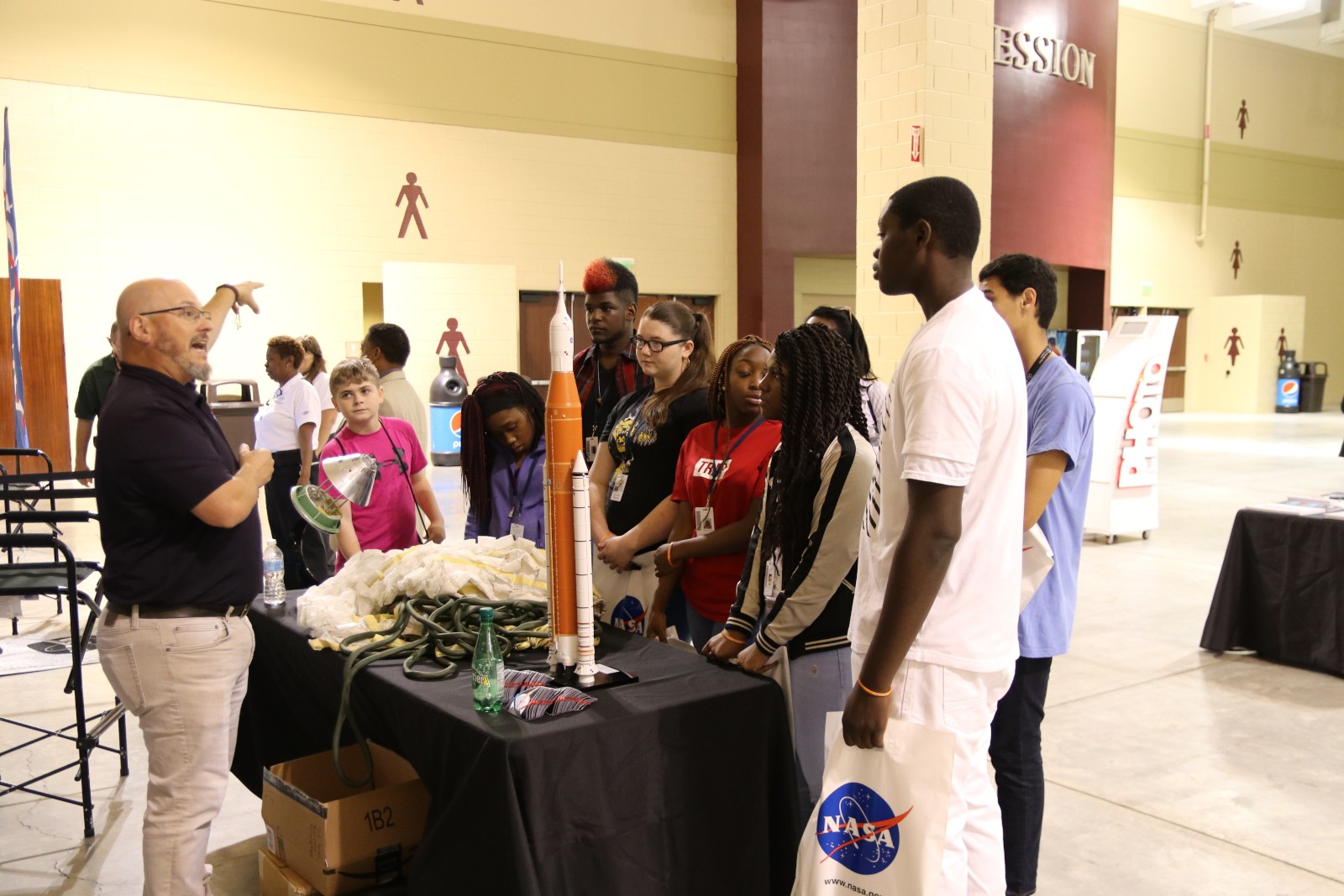 Students participate in the Launch Your School Year with NASA STEM Exposition at the Charleston Area Convention Center as part of the Launch with NASA program in Charleston County, S.C. Photo by Jen Matto

What does NASA have to do with local government?

Charleston County, S.C. Deputy Clerk of Council Kristen Hess found herself frequently answering the question posed to her by friends and co-workers after the county partnered with the National Aeronautics and Space Administration (NASA) in 2018.

After Charleston County staff learned of NASA’s interest in connecting with local businesses at NACo’s 2017 Annual Conference in Columbus, Ohio, county staff connected with NASA to discuss technology transfer opportunities. NASA recommended partnering with the Marshall Space Flight Center in Alabama, which was looking to promote their space launch system and establish contracts with local vendors.

Both events were simultaneously held at the Charleston Area Convention Center.

At the business forum, small businesses discovered technology transfer opportunities and ways to contract with NASA as a supplier, subcontractor or service provider.

“We never planned for any of this,” Charleston County’s Chief Innovation Officer Kevin Limehouse said.

“We were just excited for the tech transfer stuff and then they said, ‘Hey, what about this business expo?’”

With more than 250 attendees and exhibitors, participants explored opportunities to work with NASA and visit with other government agencies and defense contractors.

The program brought together both NASA’s mission to connect with businesses and the county’s need to increase economic and educational opportunities.

“What the business expo was offering to our citizens was for these local mom and pop shops to have the opportunities to have these big contracts with NASA or their contractors,” Hess said.

In conjunction with the Small Business Forum, the Launch Your School Year with NASA STEM Expo took place at the exhibit hall next door and attracted more than 1,200 students.

Companies that participated in the business forum were also able to attend the STEM expo.

“There was so much energy and so much enthusiasm for the kids and the people who were the exhibitors,” said Clare Petersen, executive assistant for the deputy administrator of Public Services.

“It really was just a very inspiring place and what we found was that the businesspeople were leaving their event and checking it all out and playing with the toys and interacting with the exhibits.”

Students visited different booths and met with NASA staff, participated in STEM hands-on activities and heard from retired astronaut Donald Thomas, who gave presentations as students rotated in and out of the auditorium.

The goal of the expo was to reach students who might not otherwise know about STEM careers.

Hess helped plan the STEM component of the event and coordinated both the business forum and STEM expo taking place at the same time.

“NASA liked the setup so much that they would start suggesting that be done at other events that they held throughout the United States,” she said.

Deputy County Administrator for Finance Doug Wurster said the county only needed to use a small portion of economic development money to fund the event because of sponsorships and registration fees businesses paid to attend the forum.

As part of the weeklong events, the county also hosted the NASA Prime Contractor Council Meeting where the Charleston County Economic Director presented to NASA’s top contractor about the economic outlook for the Charleston area.

Thomas, the retired astronaut, visited schools in underserved communities to discuss his experience in space.

“NASA was the catalyst. It was a great thing and it brought so many people together and created partnerships that never existed before that should have,” Limehouse said.

“It has perpetuated the county to continue to seek out new partnerships and work with people even more.”

Because of the 2018 event’s success with the Marshall Flight Center, NASA wanted to turn the county’s planned 2020 event with the flight center into a NASA regional conference.

The event was planned for March, but was moved to March 2021 because of the coronavirus pandemic.

“The conference itself is growing both in size and scope and we’re so proud and happy for that and it’s going to be everything that 2018 was and more,” Limehouse said.

“I just don’t think anybody realized how much NASA has to offer to local governments and to the schools and just how much they want to work with everybody,” Hess added.

Charleston County’s “Launch with NASA” program is the recipient of a 2019 NACo Achievement Award in the Community and Economic Development category.