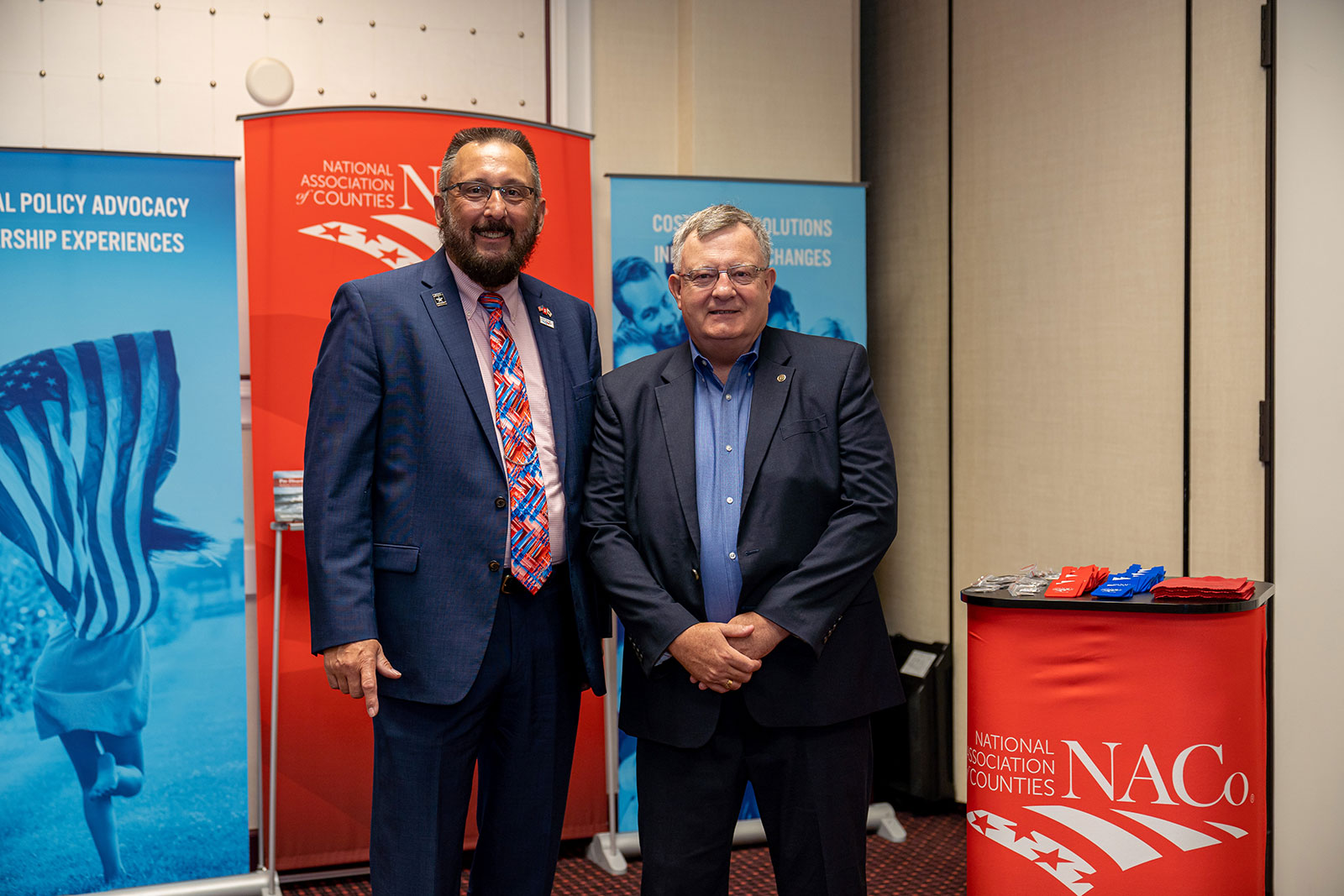 Jim Golgert and Jeff Baker catch up at the 2019 Annual Conference in Clark County, Nev. Photo by Hugh Clarke.

In order to filter by the "in queue" property, you need to add the Entityqueue: Queue relationship.
Two county officials who knew each other in another life, back when they were stationed in South Korea, reunite at NACo Annual Conferences.

Monsoons, bar fights, investigating black market deals. Those were just a few of the memories from 40 years ago, when two Army buddies — one from Colorado, the other from Indiana — worked side by side as military police investigators at Camp Casey in South Korea.

After a year or so together in the early ‘80s, the duo went their separate ways.

Fast forward to the spring of 2018, when Arapahoe County, Colo. Commissioner Jeff Baker opened his copy of County News to read a profile of a man with a familiar face: His old buddy from Camp Casey, Jim Golgart.

“I read his profile in County News, I saw the name,” said Baker. “We put two and two together. And then I called him.”

Last month, the two got together to chat at the NACo Annual Conference held in Clark County, Nev. before heading to the NACo Veterans and Military Services Committee Meeting.

Baker, a longtime county employee who was sworn into office in January 2017, and Golgart took a break between workshops at the Annual Conference to talk about catching up with each other after nearly four decades.

Golgart, the Veterans Services Office director for Le Sueur County, Minn., served in the Army for 20 years and is a past president of the National Association of County Veterans Service Officers.

He recalled joining the Army all those years ago.

“Forty years ago, June 20, I got on a train from Chicago and went to Anniston, Ala. and started basic training at Fort McClellan,” he said. “I just turned 18.”

Baker, a Denver native, joined the Army when he was 19 and did his basic training at Fort Leonard Wood in Missouri. “I wanted to be a cop, but you couldn’t be one until you turned 21,” he said. “The Army let me carry a gun and a badge.”

The two worked together in 1981 at Camp Casey, in Dongducheon, South Korea, about a 20-minute drive from the Demilitarized Zone (DMZ).

“We were both assigned to 2nd MP Company, and worked as military police investigators,” Golgart said.

“There was no average day, it would depend on what was going on.”

They investigated fights, shoplifting by soldiers and civilians using the PX base store, black market selling of cigarettes and liquor, theft of government property, fights in the village, assaults, domestic calls and more.

“There were a lot of clubs and bars outside the gates,” Baker said.

“We had a lot of young soldiers away from home for the first time, they would get into fights, sometimes with Koreans.”

A military exercise called Team Spirit saw the area population increase with an influx of Marines.

“They have some money in their pocket,” Golgart said. “At the time, a beer would cost a quarter.”

Beer wasn’t the only bargain.

“The other thing you’ll notice in our photos, we appear to be really, really well dressed,” Baker said. They often wore suits that were custom-made for $15 to $25 in town. “We wore three-piece suits. We were soldiers, but we were investigators, so we wore civilian clothes.”

“We were very well dressed,” said Golgart, whose pencil-thin mustache at the time earned him the moniker “Inspector Clouseau” from the popular Pink Panther films.

They often traveled to Seoul or the DMZ. “I was an M-16 gunner,” Baker said. “I had to carry this huge machine gun and the ammunition up to the DMZ and march back.”

The two recalled breaking up fights, working with their desks up on cement blocks in a Quonset hut when their office flooded during monsoons and pulling tipsy “turtles” (their nickname for newcomers to the base) out of concrete ditches during the rainy season.

“We had to put our desk up on concrete blocks and pallets because of the water,” Golgart said.

“That’s where I learned to type…on a manual typewriter. We didn’t have computers, Internet or cell phones.”

After working together for a year, they went their separate ways when Golgart left in the summer of 1982.

Baker, whose wife Yangson hails from Korea, also continued his career in the military, serving 17 years as a military police officer, including a tour in Desert Storm.

He retired as a chief warrant officer from the U.S. Army in 1993 and went to work as a crime scene investigator for the Aurora Police Department.

He then worked for Arapahoe County, including as the manager of Facility and Property Operations for the county before winning his commissioner’s election in 2016.

Golgart said he’s gotten involved with various committees including those at NACo that look out for veterans’ health and behavioral health.

The two plan more get-togethers in Colorado, where Golgart’s son is based at Fort Carson, Colo.

“It’s funny because I’ve worked with his fellow commissioners — Nancy Sharpe and Bill Holen, who is also a veteran,” Golgart said.

It was Holen who suggested to Baker that he ought to come to Washington, D.C. to a NACo legislative conference where he saw Golgart at a Military and Veterans Affairs Committee but didn’t recognize him because of his beard.

Then he saw him in County News, and the rest is history. “It’s a very small world,” Golgart said, “when you’re dealing with veterans.” 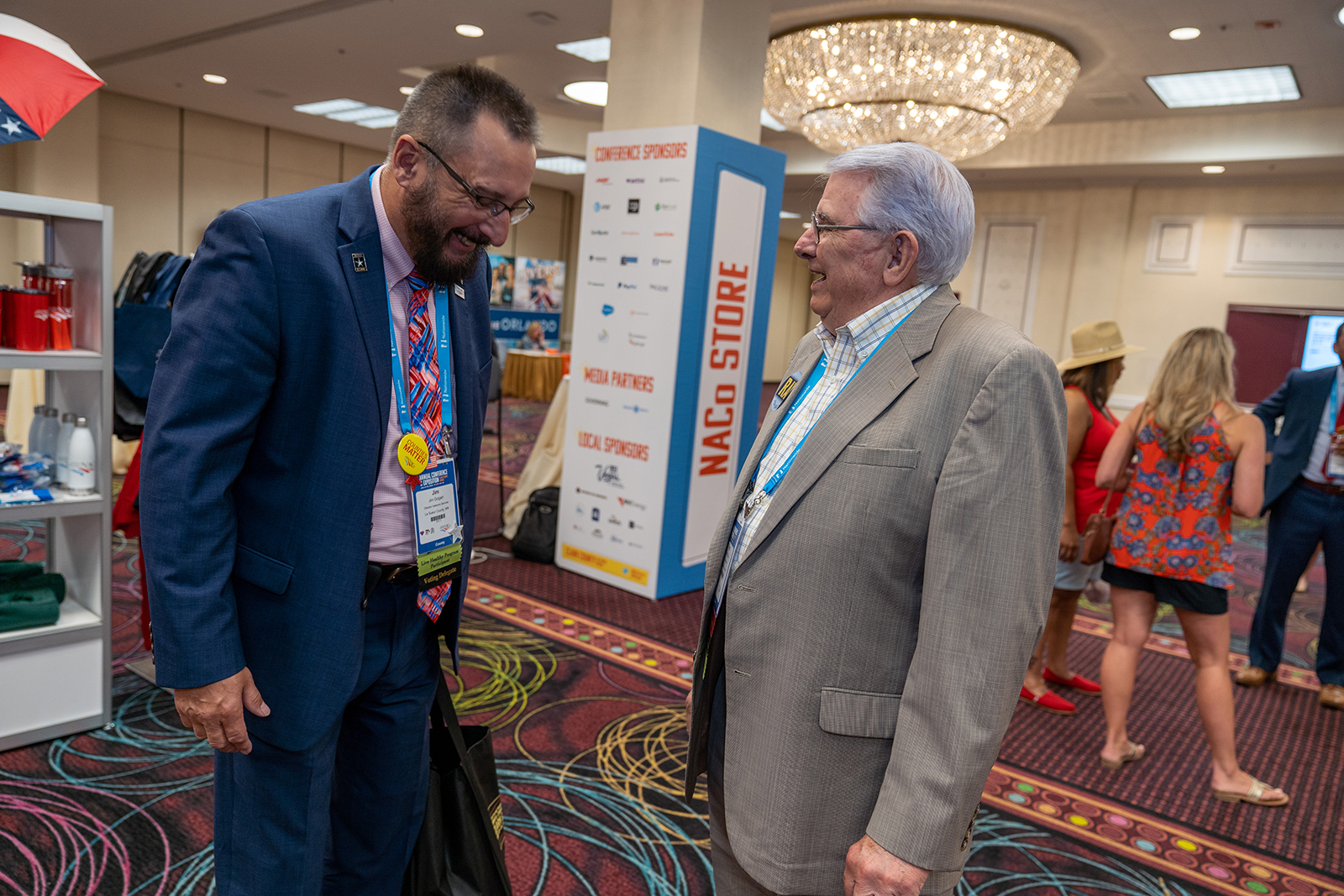