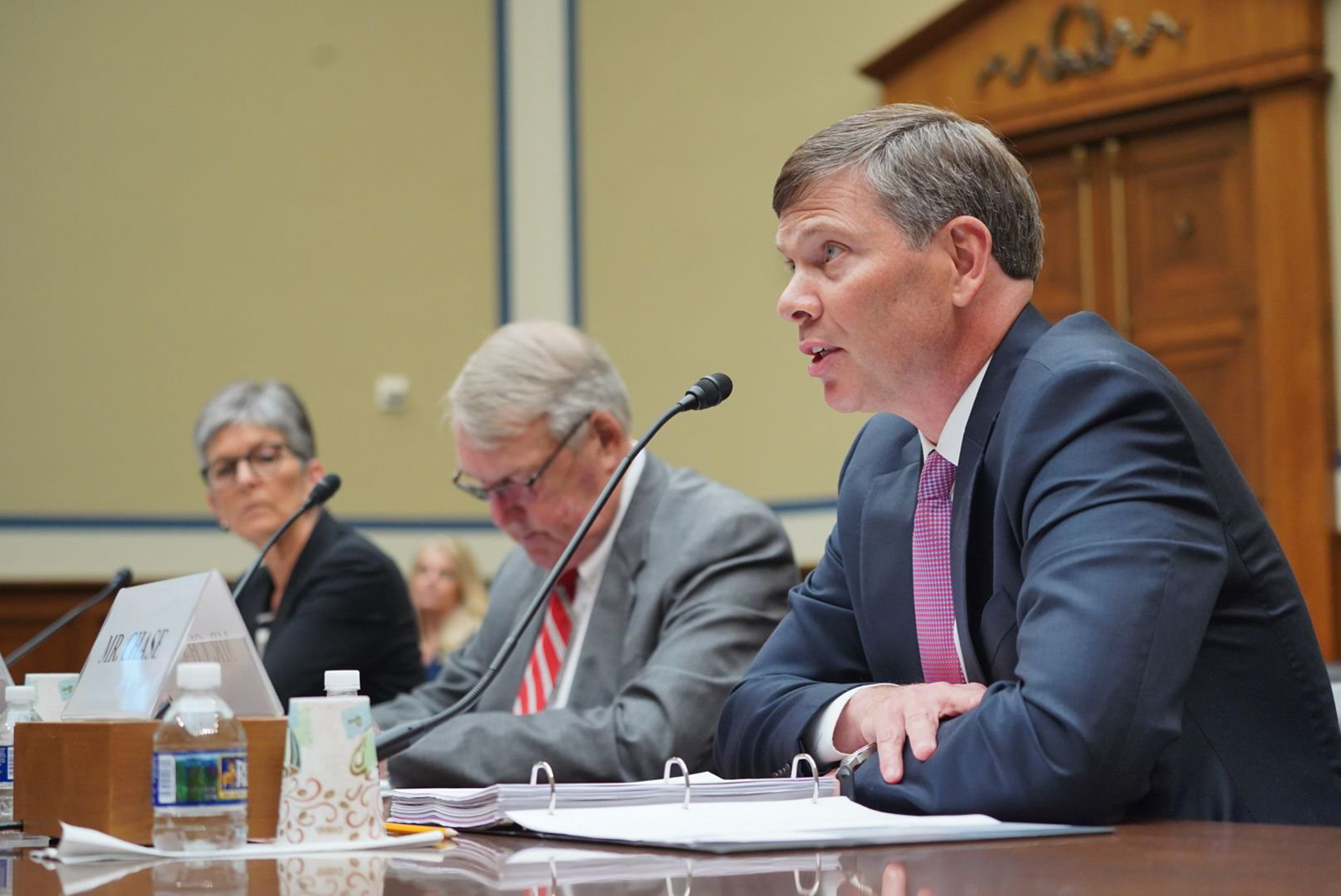 NACo CEO/Executive Director Matt Chase discusses the importance of establishing a national commission on intergovernmental relations July 23 before the U.S. House Committee on Oversight and Reform and the Subcommittee on Government Operations. Photo by Hugh Clarke

In order to filter by the "in queue" property, you need to add the Entityqueue: Queue relationship.
As the country faces public policy challenges, the collective efforts of governments working together can solve problems. Reestablishing the U.S. Advisory Commission on Intergovernmental Relations would help.

Establishing a national commission on intergovernmental relations is paramount to finding solutions to the country’s problems.

That was the message delivered to Capitol Hill July 23, when National Association of Counties (NACo) CEO/Executive Director Matt Chase testified in support of a national commission to facilitate intergovernmental collaboration.

Chase testified before the U.S. House Committee on Oversight and Reform and the Subcommittee on Government Operations about the role counties play in the nation’s federalist system.

The hearing, “Restoring the Partnership: The Future of Federalism in America,” discussed the state of federalism in the country and how Congress can improve intergovernmental processes.

Chase highlighted ideas for strengthening the intergovernmental partnership for federal, state, local and tribal officials, including the possibility of re-establishing the U.S. Advisory Commission on Intergovernmental Relations.

The Commission on Intergovernmental Relations was established in 1959 to “strengthen the American federal system and improve the ability of federal, state and local governments to work together cooperatively, efficiently and effectively.” It was disbanded in 1996.

More information on the hearing.

As the country faces public policy challenges, Chase noted, the nation needs the collective efforts of governments working together to solve problems. He specifically referred to the future of work, cybersecurity, disaster mitigation, transportation, infrastructure, dealing with the nation’s aging population, the crisis with substance abuse and the challenges with uneven economic growth as public policy challenges.

“We must pursue a more modern, practical approach to forging intergovernmental partnerships with an emphasis on solutions,” Chase said. “After all, government works best when we work together and this includes with our colleagues in the private, nonprofit, academic and philanthropic sectors.”

Prior to the hearing, Rep. Gerry Connolly (D-Va.), who serves as chairman of the Subcommittee on Government Operations, and Rep. Rob Bishop (R-Utah) introduced the bipartisan Restore the Partnership Act, which would establish a national commission on intergovernmental relations.

Chase said the Restore the Partnership Act is an essential pillar in rebuilding and rebalancing the nation’s intergovernmental system.

“We are long overdue for a new infusion of thinking and commitment to improving our nation’s intergovernmental principles and practice,” he said.

Chase said for counties, a significant challenge with the federal government is dealing with rules and regulations.

Counties and other local governments do not want to be treated as special interest groups and seek a continuous and transparent process when it comes to forming rules and regulations, he said.

“Right now, we don’t even have a seat at the table,” Chase said.

“Particularly in the rule-making process, we are being treated like the general public rather than intergovernmental partners.”

As an example, he explained that federal changes eliminated the advance refunding of municipal bonds, which has constrained fiscal options for county governments.

“We have many things that aren’t federal dollars,” he said. “It’s actually more federal guidelines and regulations and handcuffing our ability to be flexible at the local level.”

Forming a commission would be beneficial to having a dialogue about issues that have federal, state and local intersections such as elections, where counties pay the majority of the costs of election equipment, Chase said.

“We aren’t asking for the federal and state governments to just bail us out, but oftentimes those mandates are imposed and we do have to carry those out often in quick time frames where you can’t adjust your tax base,” he said.