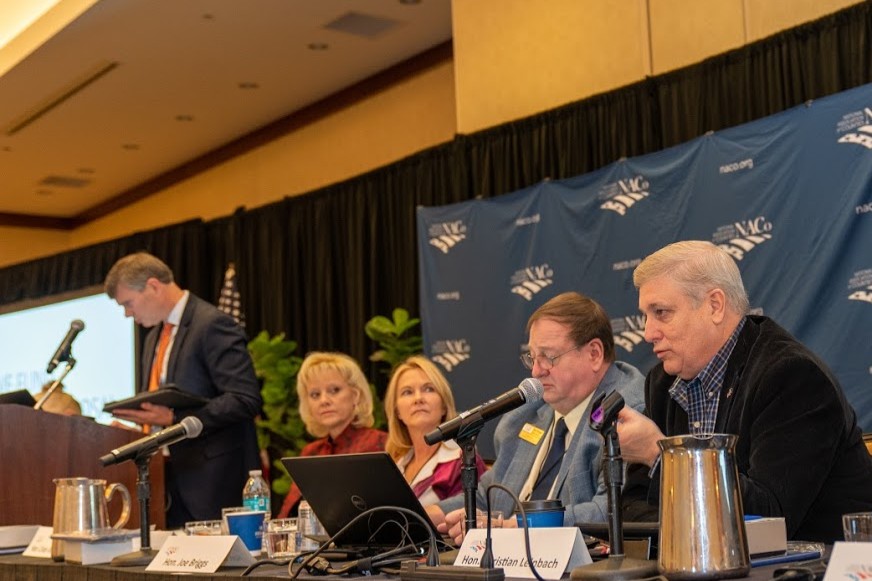 During its fall 2019 meeting Dec.6-7 in Douglas County, Neb., the NACo Board of Directors approved national policy priorities that the organization will target in 2020, along with 36 policies identified by NACo's 10 policy steering committees.

Restore the balance of Federalism and optimize intergovernmental partnerships

NACo supports efforts that recognize and respect the unique roles and responsibilities of counties as essential partners—not just stakeholders—in our nation’s intergovernmental system of federal, state, local and tribal government officials. Consistent and meaningful engagement and consultation between intergovernmental partners is vital in the development and implementation of effective policies, programs and regulations. County governments are tasked with both implementing state and federal policies and regulations at the local level and should be included at all stages of the governing process. NACo urges Congress to pass the Restore the Partnership Act (H.R. 3883) and the Unfunded Mandates Information and Transparency Act (H.R. 300) to increase transparency to reduce regulatory burden, foster intergovernmental dialogue and unite all levels of government in supporting our unparalleled system of federalism.

NACo supports a two-year authorization of the Water Resources and Development Act (WRDA) that will address county interests related to ports, inland waterways, levees, dams, wetlands, watersheds and coastal restoration. As owners, users and regulators of water resources and infrastructure, counties are directly impacted by the policies and funding authorized through WRDA authorizations. Any water infrastructure legislation should address the needs of counties, including: allocating federal matching funds for local governments to plan for and implement projects that reduce flood damage risks and address habitat restoration, connectivity and resiliency, ensuring counties are consulted prior to the federal government undertaking water resource projects within county boundaries, and strengthening the federal-state-local partnership in the decision-making process for water projects.

NACo supports sensible measures that promote and advance the overall safety of the public, and enhances federal, state, and local partnerships to provide evidence-based treatment services to justice involved individuals suffering with mental illness and substance use disorders. NACo urges Congress and the Administration to advance legislation and regulations that would amend the federal Medicaid Inmate Exclusion Policy (MIEP) and allow non-convicted individuals to have continued access to necessary treatment through federal health benefits such as Medicaid, Medicare, CHIP and VA health benefits. Furthermore, NACo supports policies and programs that divert non-violent individuals struggling with mental illness and/or substance use disorders from local jails into more appropriate treatment services.

NACo supports the deployment and availability of emerging technologies, such as small cell 5G, to all areas of the nation to ensure equitable economic and educational opportunities for all. County officials must also fulfill our responsibilities as trustees of public property and as protectors of public safety and health during this deployment process. By preserving local authority, county governments can ensure that the public interest is being served by communications providers regardless of the delivery platform.

Additionally, complete and accurate connectivity data is necessary to effectively bridge the growing digital divide as the federal government relies on this information to determine the true need for critical broadband resources.

NACo urges Congress and federal agencies to recognize counties as partners in extending the benefits of advanced telecommunications and broadband technology — including improvements to county emergency preparedness and public safety systems — to all Americans. Federal policymakers should support local decision-making and accountability and oppose any actions that would preempt or limit the zoning and siting authority of local governments.

Establish a more effective definition of "Waters of the U.S."

NACo believes that local streets, gutters and human-made ditches should be excluded from the definition of “Waters of the U.S.” (WOTUS) under the federal Clean Water Act. NACo calls on Congress and the Administration to develop and implement a new, more practical WOTUS definition in consultation and collaboration with state and local governments.

NACo supports federal investments and policies that help advance and leverage both regional and local strategies to engage children, youth, adults and older adults in the development of a competitive and quality workforce. While national economic indicators are strong, many counties face challenges in linking residents to sustainable employment opportunities that foster economic mobility.

For example, counties are confronting increased demand and caseloads for services that help residents overcome barriers to employment, such as skills training, mental health and substance abuse disorders, accessible childcare and housing affordability.

At the same time, county governments face reduced federal and state funding, along with growing federal and state mandates, limitations and oversight. To help counties meet these challenges and foster a high-quality workforce to compete in the global economy and meet the needs of employers including county governments here in the U.S., NACo encourages a strong federal partner committed to providing increased resources and maintaining local decision-making and flexibility to achieve better outcomes for county residents, especially those in transitioning local economies.

NACo supports federal policies that provide flexibility for local decision making and increased federal investments in the nation’s elections system. As administrators and financers of our elections, counties work to ensure our elections are both fair and secure. Therefore, NACo supports a consistent, predictable and dedicated federal funding stream to assist counties with meeting the significant federal requirements already imposed on local governments administering elections. We also support efforts by Congress and the Administration to combat cybersecurity threats in a way that is inclusive of county election and technology officials.

NACo urges Congress and the Administration to provide increased federal resources to counties for disaster planning, mitigation and recovery. Counties often serve as our nation’s first line of defense before and after disasters strike. While state statutes and organizational structures vary, local emergency management responsibilities are most commonly vested in county governments. NACo supports increased federal investment in support of local emergency management capabilities that improve public safety and environmental stewardship, along with social and economic security.

Furthermore, NACo supports rapid federal reimbursement of local costs associated with major disasters and encourages the U.S. Department of Homeland Security (DHS) to administer policies and regulations on a consistent manner during any presidentially declared disaster or emergency throughout the country. NACo also encourages DHS to apply any policy or regulation changes on a prospective basis, based on the declaration date of the emergency or disaster. NACo supports DHS and FEMA leadership as they work to reduce excessive paperwork as well as overly restrictive and bureaucratic regulations.

NACo urges Congress to pass the Middle Class Health Benefits Tax Repeal Act of 2019 (H.R. 748/S. 684), which would permanently and fully repeal the 40 percent excise tax, known as the Cadillac Tax, on employer-sponsored health insurance plans. This new policy was enacted under the Affordable Care Act (ACA) in 2010 and has been delayed for implementation until 2022. As one of the largest providers of employer-sponsored healthcare insurance in the nation, county leaders would either pay significant new “taxes” to the federal government or cut healthcare coverage for nearly 3.6 million county employees and their families and dependents. NACo supports a renewed bipartisan approach to improving our nation’s healthcare delivery system that balances the roles and responsibilities of intergovernmental partners, employers and individuals.

Environment, Energy and Land Use