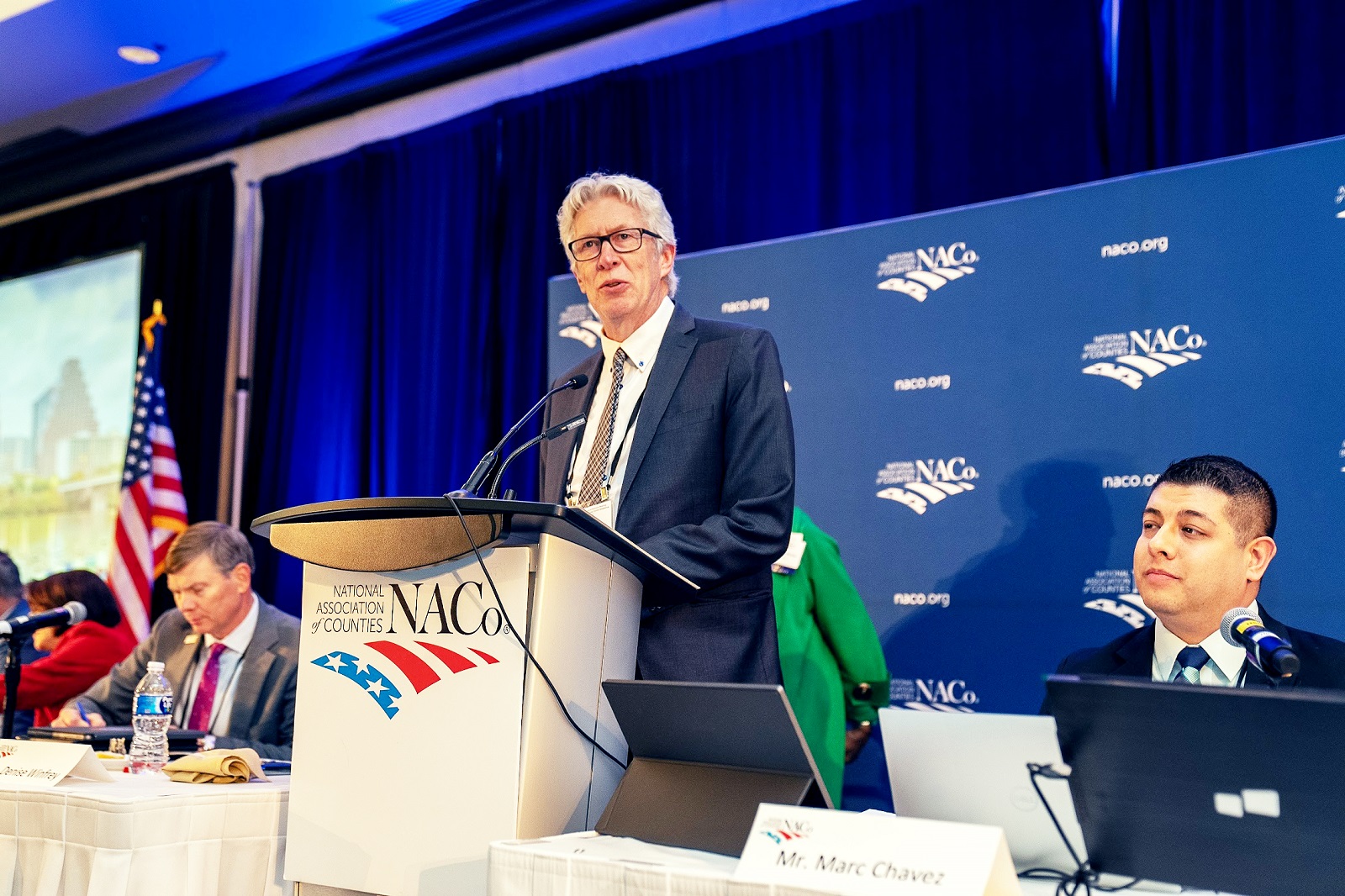 Grant Veeder, auditor and commissioner of elections, Black Hawk County, Iowa, delivers a limerick Dec. 2 at the end of the NACo Board meeting. Photo by Hugh Clarke

The NACo Board of Directors adopted 11 legislative priorities Dec. 2 during their meeting hosted by NACo President Denise Winfrey of Will County, Ill.  The priorities are:

One program that the federal government is partnering with counties on, he noted, is the Federal Communications Commission’s affordable broadband connectivity program.

“This was a critical tool that was made much better by a consultation process with counties that really identifies where broadband access is falling behind,” he noted.

“Where do we make investments in your counties to make sure that households and businesses have what they need?”

Housing is another top issue that McGowan said he hears about a lot from county officials.

“There is not a meeting I have with a county official where housing doesn’t come up in some form or fashion,” he said.

“Whether it’s unsheltered homelessness, the high cost of rent and rent-burdened households, the creation of new affordable housing units…we’re about one-and-a-half million units in the hole in this country. Or allowing residents in your communities that important first step to personal home ownership.”

“In terms of elections and election infrastructure, there’s no story I don’t read where I don’t think of you and all of your teams who are really on the front lines.”

In 2023, McGowan stressed the importance of counties getting the word out about the “successful deployments” by counties of ARPA funds.

“I’ve said it before and I’ll say it again, we need to hear your stories of successful deployments, showing that you’re good stewards of the money…investing in transformative economic development, public safety, workforce, housing — whatever it is you’re doing, we want to hear about it.”

NACo Board members also heard from Elizabeth Archuleta, director of external and intergovernmental affairs at the U.S. Department of Agriculture.

As a former county supervisor in Coconino County, Ariz., for 24 years, she said she liked to “keep up” with goings-on at NACo and enjoyed seeing new faces in the crowd.

USDA is proposing changes that allow for greater flexibility to accommodate personal and cultural food preferences and special dietary needs, she said.

Community liaisons will live and work in the rural communities they serve, allowing them to develop partnerships. The liaisons are full-time federal staff members assigned to give technical assistance tailored to each community’s need, Archuleta noted.