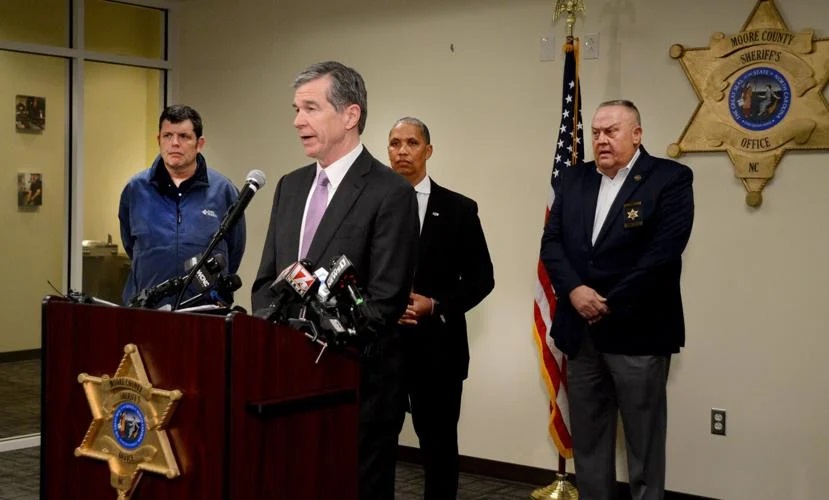 Moore County, N.C. worked for five days to mitigate challenges posed by the Dec. 3 loss of power to half the county following vandalism damage to two substations.

The next day, the county declared a state of emergency, introduced a curfew and opened the county sports complex as an emergency shelter. Sheriff’s deputies directed cars and county personnel delivered water and food to affected residents while Duke Energy worked to replace equipment that provided power to almost 50,000 people.

The next day, Moore County Sheriff Ronnie Fields called the damage an “intentional, willful and malicious act” and said that the substations were targeted with firearms. Federal and state law enforcement have joined an investigation to determine the culprit and motive behind the damage to the substations. No fatalities had resulted from traffic issues caused by the outage, and deputies managed traffic control trying to keep order Two highways traverse the county and Fields said many of those drivers were likely unaware of the challenges they’d encounter when they reached Moore County.

“With the power outage, traffic lights and streetlights out … it was difficult to get through intersections and it was just a dangerous situation overall,” said Josh Creighton, Wake County’s emergency management director, who was on loan to Moore County during the outage.

“The curfew was a preventative measure to prevent any kind of looting or any activities like that from a law enforcement perspective and it seems to have worked quite well,” he said Tuesday.

The curfew lasted until Dec. 8.

More than 50 people took shelter at the Moore County Sports Complex, which was receiving aid from the Red Cross, and the county distributed water to homes with inoperable pumps. The county’s health department suspended the permits of all restaurants, tattoo artists and camps that are open and operating without a preapproved emergency plan.

County administrative departments moved to the county’s agricultural center, which had power Dec. 5, before returning to their normal office space. The county’s transportation department limited its work to transporting patients to dialysis, chemotherapy and radiation therapy appointments or to the sports complex shelter.

The county public safety department worked to help residents prepare for the restoration of power, including unplugging appliances that may have been running when the power cut out and reinforcing the short shelf life of unrefrigerated foods and medicines.

County Commission Chairman Nick Picerno and County Manager Wayne Vest met with residents who were still without power Dec. 6, both in and out of the shelter.

“They are trying to reassess the needs of the public talking to people and finding out what needs may be out there that we haven’t been made aware of yet,” Creighton said.

Picerno and his colleagues on the Board of Commissioners were sworn in to their terms Dec. 5 in a county courthouse without power.

During a Dec. 4 press conference, then-Chairman Frank Quis urged residents to look out for one another throughout the outage.

“We can reach out, but we don’t reach out to everyone and its incumbent on our citizens to reach out and be the solution here,” he said.  “Our citizens are resourceful people. Reach out to your neighbors, to those who you know may have needs.”

Fields lamented that the outage was close on the heels of the economic damage caused by the COVID-19 pandemic when assessing the long-term damage.

“We’re just getting over COVID, now this,” he said. “How’s it going to hurt businesses and restaurants?” he mused.