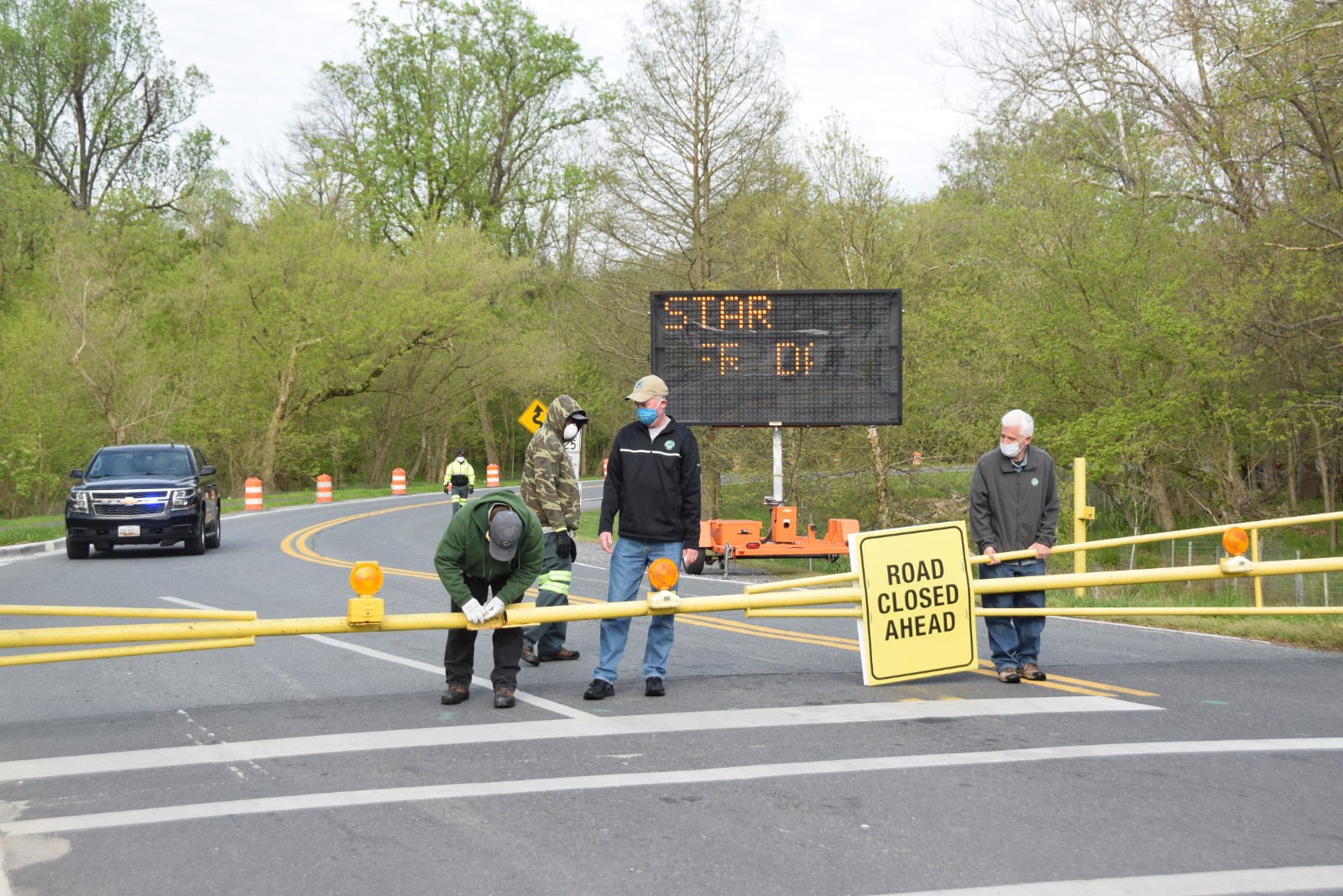 Mike Riley spent a good five minutes on a Friday morning doing the kind of public outreach he rarely expected in his duties as director of Montgomery County Parks in Maryland. He replaced the robotic voice in a motorist’s GPS navigation system.

The driver had nearly driven into the gates blocking Beach Drive, in the county’s Rock Creek Regional Park. Minutes before, the county closed nearly seven miles of parkway roads in the county for the next three days, aiming to allow pedestrians and cyclists room to spend time outside, which Riley expects more of as county residents rack up weeks in their homes.

Most COVID-19 safer-at-home orders allow for exceptions to let people exercise outdoors, and while county parks and recreation departments have been forced to close playgrounds, their open spaces are becoming even more valuable.

“As the weather gets warmer, and they’ve been cooped up longer, the need to get out just increases,” Riley said. “About a month ago, we started getting some concerns about social distancing on the trails.”

The county’s extensive pedestrian trail system was getting clogged as more and more people took advantage of the exercise exception. Despite the county’s social media push to publicize the system’s lesser-known trails, its main arteries, including one trail that leads right into Washington, D.C., were mobbed.

“The trails are eight, nine feet wide, and you can give social distance on trails, but not everyone plays by the rules,” Riley said.

The county already closed one section of a parkway on Sundays during the summer, so those closures were expanded to Fridays and Saturdays. Feedback from residents prompted the department to look for opportunities.

“Our situation is unique because we have these parkways with trails alongside and because they’re parkways they’re not considered part of the transportation network,” Riley said, which makes it easier to close them. “We just make sure we give people a way in or out of their neighborhoods.”

Riley said the feedback has been overwhelmingly positive, though he gets a few naysayers.

“Some people say we’re going to push cut-through traffic into the neighborhoods,” he said. “What traffic? Who’s going anywhere right now? The knee jerk reaction is “Oh my God, you’re going to encourage people to gather in big groups.” We’re trying to give people a safe way to get out and get exercise and not force them all onto a trail.”

St. Johns and Duval counties in Florida reopened their beaches in mid-April, restricting use to exercise in off-peak times.

Residents can walk, run, bicycle, fish, surf and swim at the beach. Law enforcement patrolling the beaches caught a man lounging on a Duval County beach, found he was wanted in a Pennsylvania murder.

“We didn’t have much of a problem when we reopened,” said Doug Bataille, director of St. Johns County Parks and Recreation. “Yeah there were people waiting when we opened, but once they got out there they got out of their way. I think people know how this is going to be: If you play by the CDC guidelines, this will work.”

After hitting what the Department of Open Space believes to have been an all-time high in visitorship, the department had to close some of its parks recently to additional visitors by the afternoon. Parking lots were full, people were circling looking for a place to park and, as Community Connections Coordinator Matt Robbins put it, being creative with parking.

“We had people parking on the side of the county roads that get really cramped and narrow,” he said. “These parks were saturated. A lot of people were coming out on a trail to find peace and solace and what you find is it being crowded, walking in a conga line up your favorite trail.”

So the county has deployed rangers and deputies, along with volunteers, to hammer home messages about safe conduct in the park.

“We want to flatten the visitation curve,” Robbins said. “Get them to come before 9 a.m. or after 3 p.m.”

The business of providing open spaces to residents is booming. The county staff are cleaning restrooms much more frequently and adding hand washing stations, to go along with additional signage teaching visitors how to practice physical distancing.

“We’re finding visitors that rarely came to our trails beforehand,” Robbins said. “There’s an educational opportunity, we might have people who show up to hike with flip flops and a big mug of coffee. There’s a good chance they’ll come back out this summer, I only think this is going to increase from here on.”

Maricopa County, Ariz. has had to institute a “one-in, one-out” policy for its parking lots to regulate park use.

Sometimes counties have had to close up when residents show they can’t have anything nice.

Rockland County, N.Y. had to close its parks by April 7, once Allan Beers, coordinator for the Division of Environmental Resources, saw attendance and activity growing too fast.

“Part of the influx came because Bergen County, N.J. closed its parks,” he said, “we had people coming in from other places in addition to our regular increase.”

The shutdown was gradual, as the department closed pavilions, removed benches and picnic tables, closed rest rooms and limited interactions with staff.

“For the most part, the public understood that we were trying to stay open,” Beers said. “Then we started seeing the signs torn down and people thinking ‘I can’t get the virus, I’m in fresh air.’”

“We’re not arresting anyone, we’re just discouraging people from coming,” Beers said. “This is a learning curve for everyone. We’re all adapting.”

Reopening will be a science, more than an art.

“Medical professionals will tell us when it’s okay to reopen the parks and gradually, we’ll phase in amenities,” Beers said.

Back in Maryland, Riley was aware of the national implications for his department’s policy. “It’s a nationwide discussion, opening up streets,” he said. “It’s something that is right for us and will benefit our residents.”

Montgomery County Planning Board Chair Casey Anderson was looking past the COVID-19 pandemic.

“This is definitely something we’d like to do more of, regardless of whether there’s a pandemic going on.”